Depre's strategy using "Cosmic Space" is put into action, and monsters can only survive with Life Star Counters. Dark Yugi believes Yugi's trapped "Toy Magician" to be the key to victory.

Duel continues in the previous chapter.

Turn 6: Depre
Depre Normal Summons "Lyra the Giver" (1800/1500) in Attack Position, who gains four Life Star Counters via "Cosmic Space". "Zeta Reticulant" attacks "Toy Magician", but Yugi activates his face-down "Toy Box", placing "Toy Magician" and another "Toy" monster from his hand in the "Toy Box" to prevent it from becoming a target. "Toy Magician" will be unaffected by "Cosmic Space" so long as it in the "Toy Box". At the End Phase, all monsters lose a Life Star Counter. 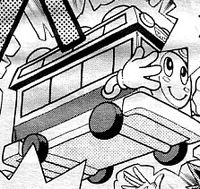 Turn 7: Yugi
Yugi's hand contains "Polymerization". He releases the monster he put in the "Toy Box" from his hand and returns to the field - "Toy Tank" (???/???). He Tributes it to Normal Summon "Dark Red Enchanter" (2300/2200) in Defense Position, who gains six Life Star Counters via "Cosmic Space". At the End Phase, all monsters lose a Life Star Counter. "Zeta Reticulant" is destroyed as it has no more counters and Depre Special Summons two "Eva Tokens" (500/300) via its effect.