"Summon the Evil God!!" is the twenty-ninth chapter of Yu-Gi-Oh! R. It was first printed in Japan on September 21, 2006 in the V Jump magazine. It was later reprinted in volume 4 of Yu-Gi-Oh! R.

The Wicked Gods urge Yako on, while Kaiba brings out "Blue-Eyes Ultimate Dragon".

In a flashback at Pegasus Mansion, Gekko attacks Yako directly with "Rogue Doll," winning him the Duel. Frustrated, Yako slams his fists on the Duel Table, muttering that he lost. Gekko returns his cards to his Deck, admitting that he didn't think that he'd win that one. He comments that Yako's combo was pretty good, and really had him sweating, but the cards he has now aren't quite the best ones for that combo. Gekko begins writing down a list of cards, including some support cards that might be helpful, as well as serving other purposes. He holds it up for Yako to suggest to Pegasus, but Yako stands up abruptly. Gekko asks him what's wrong, and Yako states that they have the same face. Gekko points out that of course they do, they're twins. Yako continues that they were born the same, Master Pegasus took them both in, and they both received the same training. Gekko gets what he's saying, adding that they've both grown as Duelists by competing against other like this. Yako asks why Pegasus calls Gekko the "Perfect Duelist," while he, according to Pegasus, is a diamond in the rough, not quite ready yet. Yako turns and flees in shame, and Gekko calls to him to wait, trying to tell him what Pegasus thinks. Yako can only miserably ask Pegasus inwardly why. He remembers being told he and Gekko are identical, so why is Gekko so much better, being called "the non-perfect one" and a "bad copy" of Gekko. He inwardly repeats the last statement, biting his lip, and then looks up into the light in surprise.

Kaiba's "Blue-Eyes White Dragon" finishes its attack as Yako snaps back to reality, and Kaiba tells him he doesn't deserve to own a God. He tells Yako to leave his God cards and go. Yako doesn't answer, so Kaiba Sets a card to end his turn. He tells Yako that it's his turn; why not admit defeat and surrender? Of course if he'd rather struggle futilely until his Life Points run out, like the poor excuse for a Duelist he is, that's fine by Kaiba. He tells Yako to draw a card. Yako raises his hand, asking himself "Draw, or surrender?" Black smoke suddenly pours from his Deck, and Yako realizes that it is his God cards. His right eye bulges, and he draws his next card. Kaiba laugh to himself; so Yako's going to fight to the end, is he? Kaiba just hopes Yako lasts long enough to die in the jaws of his ultimate monster. Yako Summons "Agathion" and ends his turn. Kaiba laughs, asking what that was supposed to be. Even for someone postponing the inevitable, that move was pathetic. It's almost as if Yako is telling Kaiba to overlook this turn. Yako doesn't answer, so Kaiba declares his turn.

Drawing, he activates the "Cross Shift" Spell Card from his hand, returning "Material Lion" from his field to his hand and Special Summoning "Lord of D." from his hand. Willa Mette, who is still watching from below, is surprised at Kaiba's use of "Cross Shift" when he could have Summoned "Lord of D." with a Normal Summon, as it's Level 4. Kaiba tells Yako that he's coming, activating his Set Spell Card, "The Melody of Awakening Dragon." A guitar appears in the hands of "Lord of D." and it strums it, as Kaiba explains that he has to send "Material Lion" to his Graveyard as the cost to add two Dragon-Type monsters from his Deck to his hand. Then he activates his other face-down Spell Card, "The Flute of Summoning Dragon." Willa thinks that there are no holes in that combo - it's perfect. The Flute appears in the hand of "Lord of D." who blows into it, Summoning the other two "Blue-Eyes White Dragons" from his hand. He laughs, telling Yako not to worry, as they may be "Blue-Eyes White Dragons" but they're still affected by his "Alpha-Wave Emission" Virus. All except the one that's been vaccinated. He attacks with his "Blue-Eyes" and destroys "Agathion," burning the puny monster to ashes. He comments that faced with his "Blue-Eyes White Dragons" he won't even have enough sacrifices to call on his Wicked Gods, and tells Yako that it's his turn. 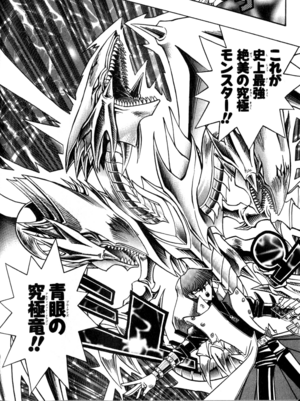 Yako draws, adding the card to his already substantial hand size, and ends his turn with only the two Set cards on his field. Willa gasps in shock, Kaiba is ecstatic, and Yako is simply impassive. As Kaiba laughs, Willa wonders what's wrong with Yako, did he give up? Kaiba admits that he'd hoped to see the Wicked God, but apparently Yako isn't a good enough Duelist yet. Kaiba draws, and looks at the card, then he chuckles. Apparently his Deck wants to settle this with the most powerful monster in existence. Willa thinks that Kaiba must be talking about his ultimate monster and the key to his most terrifying strategies, said to have attack power exceeding Yugi Mutou's God cards. Kaiba activates the card he drew - "Polymerization" and fuses the three "Blue-Eyes," telling Yako to take a good look. This is the ultimate monster, the most glorious and powerful of all, the "Blue-Eyes Ultimate Dragon!" 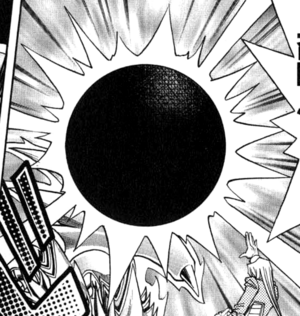 "The Wicked Avatar" is Summoned.

And then both Willa and Kaiba gasp as three "Blue-Eyes White Dragons" appear on Yako's field. He smirks, and bursts out laughing, right eye bulging; he's been waiting for Kaiba to Summon his "Ultimate Dragon." He tells Kaiba to take a look at his face-down Trap Card, "Junk Dealer." He sacrificed his Dragons to Summon his so-called ultimate monster, so he's just taking a few things Kaiba threw away. Kaiba protests that it's impossible; Yako Summoned his "Blue-Eyes White Dragons," all three of them. Eye still bulging, Yako tells Kaiba that his beloved servants will bring his worst nightmare to life. With Kaiba unable to attack this turn with his Fusion Monster (as it was Summoned by Polymerization) Yako draws, the card smoking with black smoke as he tells his Wicked God to descend to him. Sacrificing Kaiba's three "Blue-Eyes" he tells him to let him show him, as he Summons "The Wicked Avatar." The dark sun appears above him, and Kaiba asks himself if this is the Wicked God. Yako declares that now the God will change its form, and Kaiba can only look on in shock as "The Wicked Avatar" shapeshifts into a black "Blue-Eyes Ultimate Dragon." Yako tells Seto Kaiba to sink into deepest darkness, his eye still bulging.

Turn 11: Kaiba
Kaiba activates "Polymerization", fusing his three "Blue-Eyes White Dragons" to Fusion Summon "Blue-Eyes Ultimate Dragon" (4500/3800) in Attack Position. The effect of "Vaccination" allows him to transfer its effects from the "Blue-Eyes" to the "Ultimate Dragon". Therefore, it is unaffected by "Alpha-Wave Emission". Yako activates his face-down "Junk Dealer", Special Summoning the three "Blue-Eyes" used as Fusion Material Monsters to his side of the field.

Turn 12: Yako
Yako Tributes his three "Blue-Eyes White Dragons" to Summon "The Wicked Avatar" (?/?) in Attack Position. Its ATK becomes equal to the ATK of the strongest monster on the field, plus 1. Therefore, its ATK is 4501 (this effect is not explained until next chapter, instead "The Wicked Avatar" is simply shown to transform into "Blue-Eyes Ultimate Dragon").