"Fallen Angel", known as "Hanoi's Angel" in the Japanese version, is the seventh episode of the Yu-Gi-Oh! VRAINS anime. It first aired in Japan on June 21, 2017, became available with official subtitles via Crunchyroll on the same day, and aired in Canada on September 22, 2018.

Feeling that the Knights of Hanoi are behind Blue Angel, Yusaku decides to Duel her to find out her real intentions. However, Playmaker is gradually driven into a corner by Blue Angel’s tactics, which focus on dealing effect damage. Blue Angel’s strong desire to be recognized by her brother has fueled her Dueling, and she won’t hold back...

The Duel is conducted as a Speed Duel.

"Decode Talker" attacks "Holly Angel". Blue Angel activates her face-down Trap "Trickstar Reincarnation", banishing Playmaker's entire hand, then he draws the same number of cards. Four cards are banished and Playmaker draws four cards (Playmaker: 3200 → 2400 → 2200 LP). As Playmaker took damage by a "Trickstar" monster's effect, the effect of "Holly Angel" activates, increasing its ATK equal to the damage he took, until the end of this turn ("Holly Angel": 2200 → 3000 ATK). Playmaker activates the Quick-Play Spell "Security Block", targeting a Cyberse monster on the field, then preventing either player from taking battle damage this turn, also that monster cannot be destroyed by battle this turn. He targets "Decode Talker". The attack continues and "Decode Talker" is not destroyed. As a "Trickstar" monster battled this turn while Blue Angel controlled it, she activates her face-down Trap "Trickstar Scatter", targeting a monster Playmaker controls and destroying it. She targets and destroys "Decode Talker". As a Cyberse Link Monster Playmaker controlled was destroyed by Blue Angel's card effect while "Salvagent Driver" was in his hand or GY, he activates its effect, Special Summoning it (2200/2100). He Special Summons it in Defense Position.

Turn 3: Blue Angel
Blue Angel draws "Dark Angel". Blue Angel activates the effect of "Reincarnation" in her GY, banishing it, then targeting a "Trickstar" monster in her GY to Special Summon it. She targets and Special Summons "Lilybell" (800/2000) in Attack Position. The effect of "Lilybell" allows it to attack directly. "Lilybell" attacks Playmaker directly (Playmaker: 2200 → 1400 → 1200 LP). As "Lilybell" inflicted battle damage to Playmaker, Blue Angel activates its effect, targeting a "Trickstar" monster in her GY and adding it to her hand. She targets and adds "Candina".

Turn 4: Playmaker
Playmaker draws (Playmaker: 1200 → 1000 → 800 LP). As Playmaker took damage by a "Trickstar" monster's effect, the effect of "Holly Angel" activates, increasing its ATK equal to the damage he took, until the end of this turn ("Holly Angel": 2000 → 2200 ATK). Playmaker Normal Summons "Defect Compiler" (1000/1000). Playmaker activates the effect of "Salvagent Driver", discarding a Spell, then targeting a Cyberse monster in his GY to Special Summon it, but it cannot attack directly this turn. He discards "Cynet Universe", then targets and Special Summons "Link Bumper" (1400/←↑).

Playmaker sets "Salvagent Driver" and the Link-2 "Link Bumper" in the Link Arrows to Link Summon "Encode Talker" (2300/↑↓↘) to the Extra Monster Zone. "Defect Compiler" attacks "Lilybell". Playmaker activates the Quick-Play Spell "Frontline Disturbance", targeting a Level 4 or lower monster Blue Angel controls. If it leaves the field, Playmaker places a Disturbance Counter on a face-up monster he controls, then as long as it has a Disturbance Counter, it gains an effect. He targets the Level 2 "Lilybell". During Playmaker's turn, Blue Angel activates her Skill "Trickstar Trick", discarding a "Trickstar" card to make Playmaker draw until he has three cards in his hand, then during the End Phase of this turn, Playmaker must banish a card from his hand for each "Trickstar" monster in Blue Angel's GY. She discards "Candina" and makes Playmaker draw three cards. As Playmaker would take damage from Blue Angel's card effect, the effect of "Defect Compiler" places a Defect Counter on it instead, up to a maximum of one ("Defect Compiler": 0 → 1 Defect Counter). 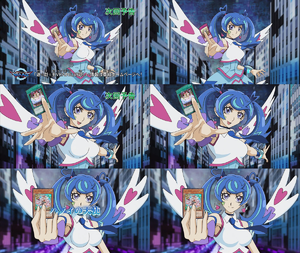 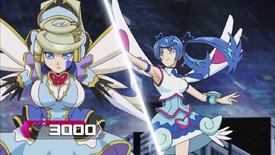