Girag, with the power of the "Barian Sphere Field", has weakened Astral. He challenges Yuma with Ray as his second opponent. However, with the effects of Girag's "Pressure Point" Deck, Utopia is damaged from the inside out, and destroyed. Girag, incapable of controlling his rage and driven to take vengeance for Alito, Summons his "Chaos Number" and corners Yuma and Ray into the mother of all pinches. At that time, Ray, touched by Yuma's willingness to protect him no matter what the cost, awakens a miracle no one could have ever imagined possible!

3/1200/800) in Attack Position. As long as there is an Xyz Monster on the field, the first effect of "Shining Sly" will prevent it from being targeted for attacks. Ray Sets a card.

"Giant Red Hand" attacks Yuma directly, but Ray activates his face-down "Shining Stunt" to negate the attack and end the Battle Phase as well as inflict damage to himself equal to half the ATK of "Giant Red Hand" (Ray: 1400 → 100 LP). Girag Sets two cards and activates "Erosion Hand Forest", which will inflict 1000 damage to all players during his Standby Phase. 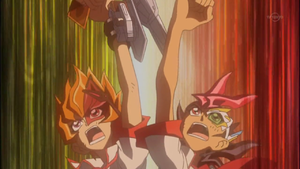