Yuma's Duel with Shark begins with Tetsuo's and Yuma's Decks on the line. Shark overpowers Yuma during the Duel, but when Yuma decides to believe in himself, his broken pendant restores itself, and Yuma uses it to open the door of his dreams. When he does so, a dark card, called a "Number", possesses Shark, making him even stronger. However, at the same time, a mysterious entity appears before Yuma, telling him to stand up and win.

As Yuma arrives to the marked place, Shark congratulates him on not chickening out, but says that running away would at least have saved his Deck. Yuma replies saying that he'd rather never more Duel than running away from a guy like Shark. Both then set their Duel Gazers and D-Pads, beginning the Duel, as Kotori and Tetsuo watch.

Yuma begins his turn saying that "he will jet", and Normal Summons "Zubaba Knight" in Attack Position. He says that as one can't attack on the first turn, he'd then end his turn.

As Shark draws, he wonders if that 1600 ATK is Yuma's strongest card, and Summons "Big Jaws" in Attack Position. Yuma is surprised at Shark's monster being stronger than "Zubaba Knight", as Shark declares that thanks to that, the monster with lowest ATK would be destroyed - and that that was not all; the player would also receive the difference as damage. He also says weak monsters like "Zubaba Knight" should be played in Defense Mode, and that even if Yuma had played a better card, that wouldn't have helped him, as he activates "Aqua Jet", increasing the ATK of "Big Jaws" even more, and attacking "Zubaba Knight". The latter is destroyed, as Yuma's Life Points go down to 2800. Shark Sets a card and ends his turn.

Yuma draws, as he complains that all he's done so far was losing 1200 Life Points. He then Summons "Gagaga Magician" in Attack Position. Shark says that Summoning a 1500-ATK in Attack Position was a blunder, but Yuma says it was not, as he equips "Gagaga Magician" with "Wonder Wand", boosting his ATK to 2000. Yuma declares that if his monster's ATK is low, he can still power it up with Spells too, as Shark says Yuma is not as dumb as he looks. Kotori celebrates Yuma's monster being stronger than Shark's, as Yuma attacks, with Shark saying that Yuma is still a terrible Duelist though, having disregarding his face-down card. Shark activates "Poseidon Wind", forcing "Gagaga Magician" back, and at the same time inflicting 800 points of damage to Yuma's Life Points. Kotori is worried about Yuma having lost half of his Life Points in just 3 turns. Yuma stands up and notes that he has a Trap Card in his hand as well. He says that he is playing a Trap Card face-down to end his turn. Shark is surprised, and Tetsuo tells Yuma that one can play both Spells or Trap Cards face-down, so he shouldn't tell his opponent which one he's playing.

Tetsuo tells Yuma not to tell his opponent which card he's Setting.

Shark says that Yuma's completely idiot, and asks if he really intends to be the Duel Champion, as he starts his turn. He says he's done playing around, and Summons "Skull Kraken" in Attack Position. Seeing its 600 ATK, Yuma deduces that means Shark doesn't have a monster stronger than "Gagaga Magician". However, Shark says he wouldn't bet on that, as he activates the effect of "Skull Kraken" to destroy "Wander Wand", resetting the ATK of "Gagaga Magician" to 1500.

Yuma's shocked on Shark's using monster effects now, as he slowly loses hope, saying that it's no good, that he can't "jet" at all, as he tightly holds his pendant. Shark asks Yuma if he's still wearing "that piece of junk", and says that that's why he can't win there - because he was clinging to that "trinket". He also claims that one his own, Yuma is powerless, and can't do a thing. Trembling, Yuma tells himself that no matter how much he messed up or how many people laughed, he managed to keep "jetting" because he believed in himself. At that moment, the pendant lights up, and the piece which was broken restores itself. 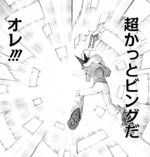 He then finds himself in front of the door from his dreams, which calls him to open it, in order to gain a new strength, at the cost of losing what he holds most important. Yuma notes the lock in the gate, and after a brief hesitation, rushes towards it, saying that he wasn't done "jetting" yet, as he opens the lock with his pendant. As the chains of the door tear and it opens, a huge light appears, and numerous cards get out of the door.

Shark possessed by the "Number".

Yuma then finds himself back at the Duel, and wonders if it was a dream, when he notes Shark surrounded by a dark aura, claiming that he feels powerful. A voice then tells Shark to call it - to call the "Number". Shark then screams and Overlays "Skull Kraken" and "Big Jaws", both Level 3, calling up "Number 17: Leviathan Dragon" to the field. Tetsuo is surprised that that's not the monster Shark used against him, as Shark, now totally possessed by the "Number", activates it's effect - he detaches one Xyz Material from "Number 17: Leviathan Dragon" - "Skull Kraken" - in order to power up its ATK by 500, to 2500. 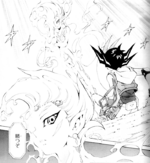 A mysterious entity appears before Yuma.

He attacks and destroys "Gagaga Magician", reducing Yuma's Life Points to 1000, as Kotori yells his name. Laughing, Shark claims that the Duel is over, and that he would finish it with the next attack. As Yuma falls due to the attack of the "Number", he wonders if he's really not good enough for that, but at that time, a mysterious entity stands next to Yuma telling him to stand up and win.

The following cards appeared in this chapter. cards in italics debuted here.