"Plot and Counterplot?!", titled "The Opposite of Opposite is…!?" (ウラのウラは…！？ Ura no Ura wa…!?) in the Japanese version, is the fifth chapter of the Yu-Gi-Oh! ZEXAL manga.

A boy named Tokunosuke Hyori shows up and challenges Yuma to a Duel. However, Tokunosuke uses his tricky methods to deceive Yuma, and takes control of his "Numbers"...!

Tokunosuke defeats a Duelist, who calls him despicable. Tokunosuke responds that the result can be brutal and that as they agreed, the man's Deck now belongs to Tokunosuke.

At Yuma's house, Yuma is in the bathroom, while Astral floats outside the door. Yuma asks Astral why he's following him, with Astral telling him he's not so sure himself. Yuma is surprised it turned out this way, and reveals that Astral is known as the "Duelist's Spirit". He may be skilled, but Yuma does not want to rely on him. Yuma tells him to stop bugging him, with Astral saying he'd like to leave himself, but can't. 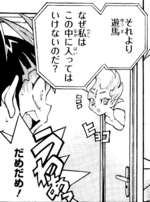 Astral pokes his head through the door.

Astral muses that he may have an important mission to fulfill and that if they can obtain the "Number" cards, he may recover his memory. Yuma says that he's never heard of amnesiac spirit. Astral asks why he can't go inside the room with Yuma and Yuma claims that if someone sees a human "releasing energy", that human will die. Astral takes this as "observation 1" as he pokes his head through the door, but Yuma tells him not to remember that. 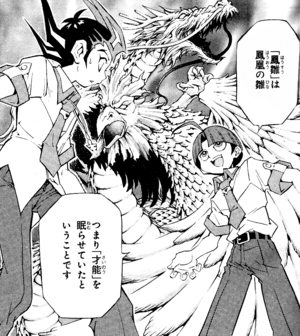 Later, Yuma goes to school, and Astral asks what that place is. Yuma explains it's a place where you learn things, and that in his world, all kids are expected to attend school. Yuma is greeted by Cathy, Kotori, Takashi and Tetsuo. Takashi says he heard Yuma won against Shark, surprising Yuma, while Tetsuo says he let it slip. Takashi says he didn't know that Yuma was actually a good Duelist and that he must have hidden, undiscovered talent.

Yuma reveals that most of his victory is due to the "Numbers" card Astral gave him, but specifies that appears that no one can see Astral but him. Cathy grabs Yuma's arm, saying he must have won through his power of "jetting". Kotori asks if Cathy isn't getting a little too close to Yuma and Cathy asks why she has a problem with that. Kotori and Cathy begin to yell at one another, as Yuma falls over. At that time, Tokunosuke, who was hidden, watching him, determines that his next target will be Yuma, and he believes something fishy must have happened for Yuma to beat Shark.

He later runs over to Yuma, asking him for his autograph. Yuma asks who he is, and Tokunosuke responds that he's in the neighboring class. In gratitude, Tokunosuke gives Yuma a "Baby Tiragon" card and Yuma is ecstatic to receive his own Xyz Monster. Tokunosuke tells him that this is proof of their friendship. As Yuma leaps in the air in excitement, Tokunosuke calls him a fool inside his mind, as he doesn't realize everything has an opposite side. Tokunosuke asks how Yuma beat Shark without an Xyz Monster. Yuma says he has one, but it isn't technically his. Tokunosuke determines that that must be Yuma's trump. 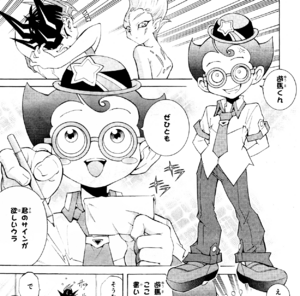 At home, Astral asks who the two people in the picture Yuma has on his desk are. He tells him that those are his parents and who never returned from their adventure. Astral recalls Yuma mentioning that his parents gave him the Emperor's Key and wonders if they are related to its powers. Yuma tells him to forget about that and shows him his new "Baby Tiragon" card - his very own Xyz Monster. Yuma hears someone coming. His sister, Akari, enters the room and asks when he's planning to go to bed - she's trying to write a news article and Yuma won't be quiet. He apologizes and says he'll go to bed now. Seeing the card in his hand, she asks if he's been playing Duel Monsters. He says that of course he hasn't, as his sister previously forbade him to do so. Their grandmother muses that Yuma is a poor kid to be picked on like that. 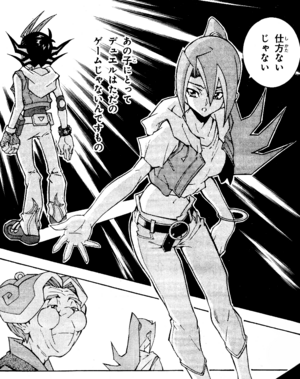 Akari believes that for Yuma, Dueling is more than just a game, and that it can't be helped. Astral is surprised to learn that Yuma isn't allowed to Duel and Yuma responds that his sister doesn't wish him to, as she believes something bad may happen. Astral thinks that perhaps Akari is aware of the relationship between Yuma and The Emperor's Key. The next day at school, Kotori tells Yuma that Tokunosuke was looking for him a minute ago to challenge him to a Duel after school. She tells him to be careful, as Tetsuo had heard many bad rumors about Tokunosuke. Yuma refuses to believe this, saying that Tokunosuke is a good guy. Later, Yuma meets him, telling him that he'd be happy to Duel. He responds that Duel will be held where everyone can see. If he defeats Yuma, he'll be the strongest Duelist at school, since Yuma defeated Shark. Yuma accepts the challenge, and the two activate their Duel Gazers. 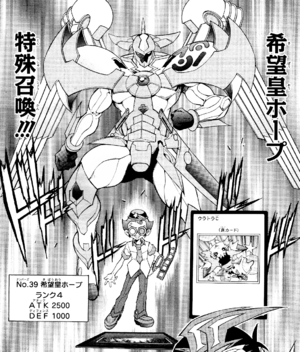 Tokunosuke draws, and Sets both a monster and a card. Yuma draws, commenting that Astral is awfully quiet today. Astral responds that if the Duelist isn't using a "Numbers" card, he's not interested. Yuma says it's nice not to have to listen to his advice anyway. Yuma Normal Summons "Gagaga Magician" in Attack Position and attacks the face-down monster. It is "Tubone", which is destroyed, though its Flip Effect activates. Yuma declares that with only 300 DEF, the monster is no match for his "Gagaga Magician". Tokunosuke Special Summons three "Tubone Jr." from his Deck to Yuma's side of the field, perplexing both Yuma and Astral. Tokunosuke regrets and says that he carelessly Summoned monsters to Yuma's field. Astral questions what the point of the Flip Effect was, as Yuma declares that Tokunosuke let his guard down. With three monsters of the same Level, Yuma decides to Overlay them and Xyz Summon. 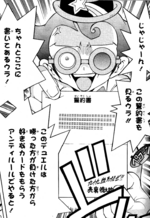 Astral realizes it was a trap to force Yuma to Xyz Summon, and tells him to stop. Yuma tells him to be quiet for now and Xyz Summons "Baby Tiragon". Tokunosuke declares that Yuma fell for it and activates his face-down "Ultra C", a Continuous Trap Card. As Yuma Xyz Summoned "Baby Tiragon", Tokunosuke may Special Summon an Xyz Monster from Yuma's Extra Deck. He chooses "No. 39: Utopia". Tokunosuke reminds Yuma that they are betting their Decks on the Duel, pulling out the autograph that Yuma signed earlier - it was in fact an agreement to bet on their best cards. Yuma asks if Tokunosuke deceived him for the beginning, and he responds that Yuma should have known that everything in the world has an opposite side.