When a bandit attempts to rob people in a shopping mall, a "Numbers Hunter" called Kaito appears. After defeating him and taking his "Number", Kaito meets Yuma.

At a shopping mall somewhere in Heartland City, a litterbot is blown apart by a man with a shotgun. The gathered crowd screams and the man tells them to shut up and asks where his money is. He tells them he's had enough playing around and shoots at a crystal sculpture on the ceiling. It bursts into gigantic shards, causing the crowd to run to avoid being hit. The man laughs, but then sees some of the shards are falling towards him. Time appears to stop as a a robot appears, saying "Master Kaito" to boy dressed in black that has appeared. Kaito says he's here to reclaim the man's "Number". The man asks who he is and when he got here. The man attempts to shoot him, but finds his gun fails to fire. Kaito tells him it's useless - in this space, they can do nothing that doesn't involve Dueling. He tells the robot to stand by, calling it Orbital 7. It responds "understood" and shoots a D-Pad out towards Kaito, who catches it and says he'll expose the man's darkness. The man asks why Dueling and Kaito responds that "Numbers" only possess Duelists. The man holds up "No. 20: Giga-Brilliant" and says he's felt very good since he came across it. 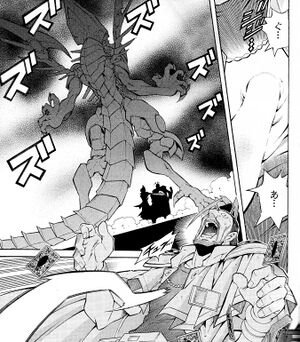 Kaito says that he is the light that illuminates the darkness which stagnates people's hearts. As he speaks, light surrounds him and he says that people call him the Numbers Hunter. The man is confused as to why Kaito is glowing. When he ceases glowing, his clothes have changed and he says he will hunt the man's "Number" - and his soul. The Duel isn't shown, except for the end result. A dragon controlled by Kaito attacks the man, who falls to the ground. The "Number" card flies towards Kaito who remarks that "Number 20: Giga Brilliant" has been captured. 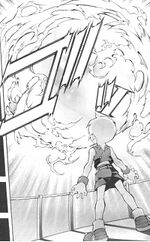 Haruto creates a fireball with garbage.

Time appears to return to normal and the shards of the sculpture continue to fall, but the entirety of the crowd is away from them. Two girls ask one another if they just teleported somehow. Kaito stands on a roof and stares at Heartland Tower as lightning flies near it. In Heartland City's garbage processing plant, a young boy stands on a floating platform. He yells that he wishes to hear more screams. Garbage swirls around and coalesces into a fireball, which hits Astral World through a portal. Dr. Faker smiles as he watches on. At Heartland Tower, Mr. Heartland tells Kaito that he'll be sure to convey his passionate heart to Dr. Faker. He tells Kaito he should go see Haruto, as it's been a while - and it will surely boost Kaito's will as well. After Kaito leaves, Heartland turns around and addresses Dr. Faker through a circular monitor. He tells Faker that everything is progressing well. Faker responds that that's fine and that the life of Kaito's younger brother is on the line for him. Faker states that Kaito has given up his humanity to protect Haruto, just as Faker has given up his to protect the city. Faker says that he knew a messenger would be sent from the Astral World and that he will crush it thoroughly, sending its remains back to their world. He claims it's the only way to protect the planet. Heartland says he's understood. In another room of the tower, Kaito visits Haruto, who stares out the window at people below. He asks why they're laughing - he doesn't want laughter, only more screams. Haruto asks if he's strange and Kaito tells him he's just dreaming - it's a bad dream. He vows to wake him from that dream, no matter what.

Yuma pretends he doesn't know about the "Numbers".

At Yuma's house, Akari asks if Yuma has heard of the Numbers Hunter. Yuma is surprised and asks if Akari knows about the "Numbers". She in turn asks him if he knows something about it. Yuma claims he doesn't know a thing. Akari tells him that the criminal that was behind the blockade was muttering those words incoherently when they captured him. Akari says she doesn't know what it means, but it seems to have something to do with Duel Monsters. Yuma says he doesn't know anything - he's not allowed to Duel, after all. Akari stops questioning him and Yuma thinks that that was too close. His sister almost caught him with that leading question. Astral mutters "Numbers Hunter" and Yuma asks if he can go to bed. His sister says that's fine and tells him good work.

The next day at school, it's raining heavily and Yuma remarks that he can't go outside to Duel because of it. Astral tells to be careful and that he's still worried about yesterday. Yuma asks if he means the Numbers Hunter. Astral remarks that if someone other than him is hunting "Numbers", that person will eventually come for Yuma. Astral says it's common knowledge that Yuma has used "Numbers" - it's only a matter of time before the Hunter comes. Yuma asks if Astral's scared as Kotori looks on in bemusement as Yuma appears to talk to thin air. Yuma thinks it's strange that someone else would hunt "Numbers", since they are pieces of Astral's memory. Yuma suggests that the Hunter could be an ally. He may hand Astral the "Numbers" he's collected when they meet. Astral maintains that he still has a bad feeling about it and Yuma tells him not to worry. Kotori asks if Yuma's okay - he's been talking to himself. Yuma says he's fine and Kotori asks if it's that ghost. Yuma confirms it - he was talking to the Dueling Ghost. 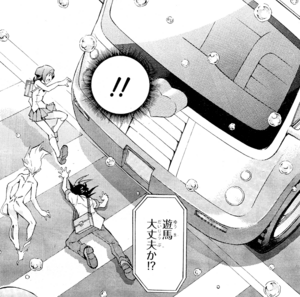 Later, Yuma remarks that even with the rain, he could still Duel in the gymnasium at the center of the city. Kotori agrees to go after school. It beings to rain again as Yuma crosses the street. He tells Kotori that the signal is going to change - she better run. Astral also appears concerned and Kotori tells Yuma to wait. A truck turns a corner and is heading right for Kotori. Yuma runs toward her, yelling her name. It nearly hits both of them, and time stops again, which Astral quickly notices. Kotori stops in a mid-fall to the ground. Kaito appears before them.