The mysterious Numbers Hunter, Kaito Tenjo, challenges Yuma for a Duel inside a special barrier created by his servant robot, while his past slowly surfaces...

Kaito Tenjo stands before Yuma. Yuma touches a water drop stopped in the air, and asks if it was Kaito who did it. Kaito explains the space their are in is a special field created by Orbital 7 - in which time moves at one ten thousandth of a second, and that the only ones who can move inside it are those with a "Numbers" card. He then reveals he is the Numbers Hunter. Yuma and Astral are shocked. Astral quickly tells Yuma that that person was dangerous, and tells him to get away, but Kaito immediately grabs him with a Duel Anchor, which won't release until the Duel ends - he explains. He also says there's no way he was letting Yuma run away from a Duel. 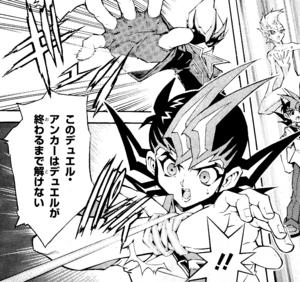 With no option, Yuma gets his D-Pad and says although he doesn't know who Kaito is, he was going to beat him. Astral offers him to help in the Duel, because their opponent this time is different, and isn't someone Yuma would be able to defeat on his own. Yuma, surprised, asks Astral if Kaito is that strong, and Astral answers saying that he would say Kaito is the strongest Duelist Yuma - no, himself have ever fought. However, Yuma says that he aims to be the Duel Champion, so he was not going to allow himself to lose to a "nobody" like Kaito. They then create a link with their Duel Gazers, and begin the Duel.

Kaito takes the first move. He activates the Spell Card "Photon Veil", exchanging three monsters from his hand with three from his Deck. Yuma and Astral comment he must be planning something, doing that kind of move. Kaito then uses "Photon Lead" to Special Summon "Daybreaker", the monster he added to his hand. The effect of "Daybreaker" activates, Special Summoning another copy from his hand - and this copy Special Summons a third one.

Yuma is surprised that Kaito already Summoned three monsters, while Astral notifies him all three are Level 4. Kaito overlays his 3 "Daybreakers" to Xyz Summon "No. 10: Illumiknight". Kaito activates its effect, detaching an Xyz Material to send "Lightserpent" from his hand to the Graveyard and draw a card; because of that "Lightserpent" is Special Summoned via its own effect, while Kaito Normal Summons "Plasma Ball". Yuma, astonished, asks just how many monster Kaito is going to Summon, and Astral, again, notes he's got two Level 3 monsters. Kaito overlays the two to Xyz Summon "No. 20: Giga-Brilliant", and, smiling, says "let the hunting begin". Yuma can't believe Kaito Summoned two "Numbers" in one turn, and Astral wonders for what reason Kaito collects the "Numbers".

Yuma Sets "Gogogo Golem", as it can withstand two attacks. Kaito activates the effect of "Illumiknight", detaching another Xyz Material to sent one card from his hand to the graveyard and draw one card. He grins seeing the card he drew. 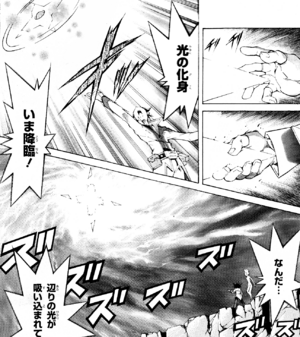 "Galaxy-Eyes Photon Dragon" appears as a star-like object, right before taking the form of a dragon.

Kaito activates the effect of "Giga-Brilliant", detaching an Xyz Material to increase its ATK by 300, to 2100. Kaito uses "Giga-Brilliant" to attacks the Set "Gogogo Golem", which is not destroyed via its effect. He then attacks again with "Illumiknight", destroying "Gogogo Golem". Kaito then says it's about time he started playing for real, and that the time for Yuma's leisurely Dueling is over. He Tributes his two "Numbers". Yuma and Astral are confused seeing how he Tributed his monsters after all that. This causes a four sided shining star to appear in the field. Kaito grabs it, and throws it up, declaring that the avatar of light will now descend. The star absorbs the light around them, and takes the form of a dragon - "Galaxy-Eyes Photon Dragon". Astral notes the dragon's eyes are like outer space. Kaito explains "Galaxy-Eyes" cannot be Normal Summoned, but can be Special Summoned by Tributing two monsters with 2000 or more ATK. Yuma is surprised with the dragon's intensity, while Astral says to himself it's different than he thought it was, and wonders what is Kaito's scientific ability. 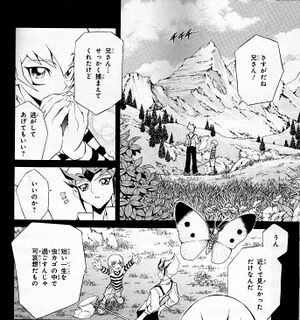 Kaito and his brother hunting butterflies in the past.

Kaito remembers about his past. Haruto was trying to catch a butterfly, but was not being able to do it. Kaito then captured it for Haruto. Haruto appreciates it for a moment, and then asks Kaito if, after the trouble he went through to catch the butterfly, he could let it free. Kaito answers saying that he can, if that's okay with him. Haruto then releases the butterfly, and explains he only got it to see it for a little bit, and that unfortunately it is an insect that passes through its short life all caged up. Kaito comments to Haruto how kind he is. However, during a certain night, Mr. Heartland appeared and took Haruto away, explaining that Haruto has a special power within him, and that those were Dr. Faker's orders. He tells Haruto to come with him, as his power would be a service to the world. Although scared, Haruto accepts it. Kaito tries to stop him, but Mr. Heartland goes away in a car. Fallen on his knees, Kaito swore he would bring Haruto back.

Back to the present, Kaito ends his turn. Astral tells Yuma that the only thing in his Deck which can defend against Kaito's dragon's 3000 ATK points was "Utopia", but that they would need two Level 4 monsters to bring it out. Yuma replies saying that he knows that, and that it would be very bad if they didn't get a Level 4 monster. Yuma then "jets", and gambles everything in his draw. Yuma draws "Kagetokage", who can be Special Summoned when Yuma Summons a Level 4 monster. Relieved, he Summons "Gagaga Magician", and Special Summons "Kagetokage" via its effect. He overlays both to Xyz Summon "Number 39: Utopia". Astral tells Yuma to use his Spell, "Blustering Winds", when attacking, because taking on the opponent in a drawn out battle was too dangerous. Kaito grins seeing the "Number" had finally appeared, and declares he will make sure they remembered well the power of "Galaxy-Eyes". "Utopia" and "Galaxy-Eyes Photon Dragon" clash.

Turn 3: Kaito
Kaito activates the effect of "Illumiknight", detaching an Overlay Unit to send a card in his hand to the Graveyard and draw a card. He then activates the effect of "Giga-Brilliant", detaching an Overlay Unit to increase its own ATK by 300 (1800 → 2100). "Giga-Brilliant" attacks the Set "Gogogo Golem". Its effect prevents its destruction in battle once per turn while its in Defense Position. "Illumiknight" attacks and destroys "Gogogo Golem". Kaito Tributes his two monsters to Special Summon "Galaxy-Eyes Photon Dragon" (3000/2500) in Attack Position.