After being overwhelmed by Kaito, Yuma's spirit is broken. While his friends try to find a way of helping him collecting the "Numbers", Mr. Heartland goes on with his plans with the aid of three new "Numbers Hunters".

Yuma's total loss to Kaito makes him lose his confidence. Seeing Yuma's spirit totally broken, his friends get worried about him at school, and discuss what happened. Later, at night, Shark passes by Yuma in the street, and looks annoyed seeing how he is acting. When Yuma gets home, he tells Akari and Haru that he was going to finish his homework, and goes to his bedroom. Both Akari and Haru are in shock about Yuma doing his homework. 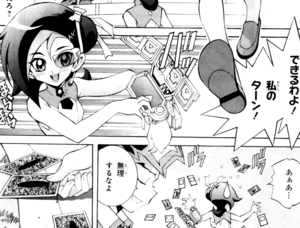 During the next day, Kotori, upset about Yuma, walks up him and challenges him to a Duel, in order to cheer him up. Yuma sarcastically asks if she really Duels, and she replies saying she for sure does; However, she fumbles when drawing, and ends up dropping all her cards in the floor. Yuma tells her not to overdo it, and she asks him back if he is just going to give up, even from "jetting". He affirms that. Kotori gets annoyed with him, and, during the P.E. class, she yells that she was not going to allow him to do so, because that's not the Yuma she knew; Yuma once more tells her not to overdo it, but she does her own "Kotori jetting", and tries to jump over 20 blocks. However, she fails, and rams her head in the blocks stack. Later, at the swimming class, she does "Kotori jetting" again, and leaps from a very high height to the pool; she fails again, and gets hurt. Yuma then pulls her out of the water and takes her to a hospital. 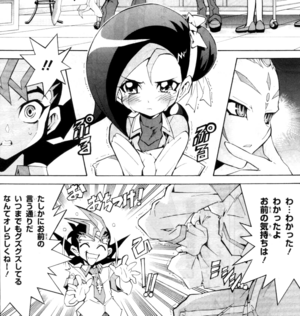 Kotori then wakes up in a hospital bed, surrounded by Yuma, Astral, Tetsuo, Cathy, Takashi and Tokunosuke. Everyone gets relieved that she woke up; Yuma yells at her saying that she went too far, but she yells back saying that it happened because Yuma is losing his confidence, and cries. This makes Yuma awkward, and he says that she is right and that he will "jet" back from that on. She then hugs him, which makes Cathy jealous, and they start to argue. However, Tetsuo cuts them off, saying that he found a way of beating the Numbers Hunter: He says that Astral is the one who's got a chance, and that Yuma should reinforce his Deck by putting his "Numbers" in it; Takashi explains that "to summarize", what he should do is get more "Numbers" than the Numbers Hunter, and use them against him. Astral comments that it's a good idea, as he must obtain all the "Numbers" anyway. Everyone gets spirited up and decides to help, but Yuma yells at them telling not to take Kaito easily, because he is terrible, and they may end up dragging themselves into his messes. Takashi asks what of it, and if he had lost to Kaito. Yuma awkwardly answers he hadn't, and before he can continue, Takashi interrupts him saying its settled; Kotori, Tetsuo, Takashi, Cathy and Tokunosuke then found the Numbers Club in order to help Yuma collecting the "Numbers". 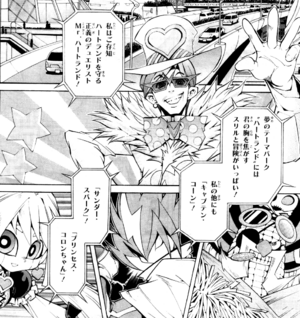 The "guardians" of the Heartland Theme Park.

Meanwhile, Mr. Heartland, as the Heartland Theme Park director, introduces three new characters, the guardians of peace and justice of the "Dream Park": Captain Corn, Thunder Spark and Cologne. A boy then goes into the Nature Crooz, the attraction owned by Captain Corn, which is crowded with people. Captain Corn then appears at the round screen mixed with the ornament treasures at the entrance, and invites the people to go on a mission with him in the attraction. The boy gets euphoric, as Captain Corn is his favorite character from the Park - whilst a camera watches him from the roof. He then goes to the corn-like roller coaster. There, a man dressed like a tomato puts him in the last wagon, and the ride begins. However, at a certain point, the boy's wagon is separated from the others, and takes a different route. He ends up in a dark place, where a light suddenly turns on, and Captain Corn appears and greets him telling a curiosity about grains. The boy can't believe he is seen Captain Corn in person, and the latter tells him he is a special something to all of them - especially the "Numbers" he is holding. The boy gets scared, and Captain Corn forces him to bet his "Numbers" in a Shadow Game. 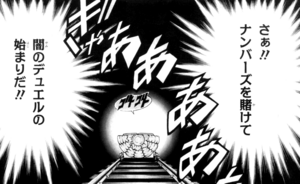 The boy's wagon returns without him.

At that time, while Kotori, Tetsuo, Cathy, Takashi and Yuma have no success at finding clues about "Numbers", Tokunosuke comes up with a rumor that "Numbers" may exist in the Heartland Theme Park.