While Yuma keeps on fighting for his "Number", Captain Corn's past is revealed.

Kotori, Cathy, Tetsuo, Takashi and Tokunosuke keep looking for Yuma in the rails of the Nature Crooz ride. Takashi says he doesn't think it's safe for them to be running back up the tracks like this, and Tetsuo says he thinks he is right, but they have to find Yuma as fast as possible. Tokunosuke says he got a bad feeling about this. Cathy asks the gang if they heard "that". Takashi says they didn't, but that cats do have excellent hearing. Kotori asks what it sounds like, and Cathy says it sounds like something heavy coming this way. At that moment, another wagon comes down the tracks with more customers. Kotori yells to everybody run, but Tokunosuke says that won't work, and the gang screams, as the wagon gets closer to them fast. 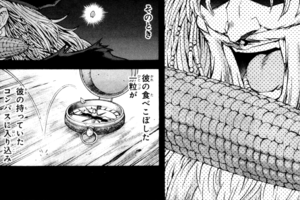 Yuma asks Captain Corn why he is collecting "Numbers" anyway, since the "Numbers" are Astral's memories. Astral says that at any rate, he seems to be another Numbers Hunter. Hearing the words "Numbers Hunter", Yuma reminds Kaito. Captain Corn says why he collects "Numbers" is "corn-pletely" obvious: to help his great benefactors, Mr. Heartland and Dr. Faker. He says they are the ones who gave him his "corn-tastic" body. Astral asks about the last part - "gave your body", and Captain Corn explains about his past. He says it was in the 18th century; he had been harvested in America and was bound for foreign lands (a ship is shown sailing). But the ship that carried him was attacked by a notorious pirate - the dread Captain Roberts. Yuma seems to find the story ridiculous, while Astral listens carefully. Captain Corn explains that he was boiled, and Captain Roberts picked him up. And then, while he ate it, he dropped a single kernel, which fell into his compass. Captain Corn says that Captain Roberts and he sailed the seven seas, but after many years, the compass came into Dr. Faker's hands. Dr. Faker is shown gazing at the compass, saying it's Captain Roberts' legendary compass, and that it must be saturated with memories of the world. When he opens it, the kernel falls from it, and is transformed into what Captain Corn is now, as he introduces himself as Captain Corn, a true pirate, heir to the spirit of Captain Roberts. Then, back to the present, Captain Corn yells "Pop! Cooooorn!!", and laughs, as Yuma says he couldn't really come from corn, and that that's pretty crazy. Yuma then looks to Astral, who asks him what's wrong, but Yuma turns back, saying to himself "...or not". Captain Corn says Captain Roberts was a genius at cards, and that he watched him tear up the gaming tables for years. He tells Yuma that he will never lose to the likes of him, but Yuma says he can't afford to lose either. Yuma says that "that other guy" (Kaito) was an awesome Duelist, and that he couldn't even touch him last time, but he will get better and beat him. He then says that if he is going to take that guy down, he has got to get stronger. Astral tells him that's right, and says that they can't let a Duel like this hold them back.

Yuma declares his turn, and Summons "Gagaga Magician". He then Special Summons "Kagetokage", explaining that it can be Special Summoned from his hand when he Summons a Level 4 monster. Yuma uses both of his monsters to create an Overlay Network, and says that he will "jet", as he Xyz Summons "No. 39: Utopia". Captain Corn is happy that Yuma finally Summoned a "Number", and laughs. Astral tells Yuma to use a certain Spell Card, and Yuma does so, activating "Hope Buster". He explains that this card destroys Captain Corn's monster with the lowest ATK, then inflicts damage equal to its ATK, as "Utopia" fires the "Hope Buster" towards "Blackship of Corn". Yuma explains the only monster in Captain Corn's field is "Blackship of Corn", so he is taking it out. However, Captain Corn says that Yuma is "too green" to face "Blackship of Corn" in an artillery battle, and declares he activates a Trap Card - effect net "Cornfused". He says Yuma's attack won't work, and explains that this card negates his opponent's effect, as a net intercepts the "Hope Buster" missile, causing it to fall effect-less inside "Blackship of Corn". Yuma is shocked that Captain Corn's net caught the shell of "Utopia", but Astral tells him not to panic, since he still has the attack of "Utopia". Yuma then declares an attack with "Utopia", Hope Sword Slash, but Captain Corn says he won't lose to this "corn-founded" thing, and intercept's the sword of "Utopia" with his own, shocking Yuma. Captain Corn declares that he activates a Trap Card: "Incornceivable", which, when he is attacked by a monster with 2500 or more ATK, Special Summon "Giant Kra-Corn" from his Deck and have it take the attack, as he continues to fight "Utopia" with his sword. Captain Corn orders "Giant Kra-Corn" to arise, which appears to the field, holding "Utopia" back. Yuma is shocked that he blocked the attack too, and Astral tells him to Set all his cards, which Yuma does so, ending his turn. 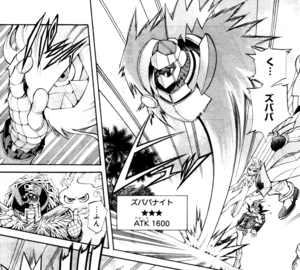 Captain Corn declares his turn, and activates the effect of "Blackship of Corn", detaching its last Xyz Material and declaring that the victory is his. Astral says that if Captain Corn uses "Utopia" as a shell, they are finished, so he tells Yuma to activate his Trap. Yuma activates "Oopsword", Special Summoning "Zubaba Knight" from his Graveyard and making it the new target of the effect. "Zubaba Knight" is pulled towards Captain Corn, who holds it with his hand and shoots it against Yuma with the cannon of "Blackship of Corn", declaring "fire". Yuma screams, as his Life Points are reduced to 300. Captain Corn tells Yuma he is at death's door by now, and switches "Giant Kra-Corn" to Attack Position. Its effect raised both the ATKs of "Blackship of Corn" and itself to 3100. Yuma is shocked at Captain Corn's having two monsters with 3100 ATK, while Captain Corn says that here comes the final blow, ordering "Blackship of Corn" to annihilate him. However, Yuma activates the effect of "Utopia", Moon Barrier, negating the effect. Captain Corn says that he still has the attack of "Giant Kra-Corn", and says that he will make Yuma burn through all of his Xyz Materials, as he declares an attack with "Giant Kra-Corn". However, Astral says that that's what they needed, and tells Yuma to activate the Trap Card. Yuma activates "Second Reflector", explaining that when two monsters with the same ATK attack in the same turn, this card kicks back the second attack. "Giant Kra-Corn" is sent backward, with his tentacles hitting Captain Corn, who screams. His Life Points are reduced to 900. 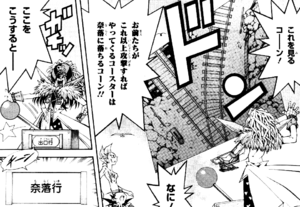 Captain Corn switches the track of the rails.

Yuma celebrates. Captain Corn, trying to stand up, says that he never lost so many Life Points in his life, and then smiles, saying that just to be on the safe side, he will use his trump card. A projection appears in the air, showing the rails of the Nature Crooz ride, and Captain Corn tells Yuma to take a look at it. He explains that if Yuma launches one more attack, he will send the next coaster into the abyss. He explains that if he does "this", like so..., and switches the lever beside him, switching the option "to exit" to "to abyss". The course of the track switches to the rail which leads to the abyss, while a wagon is coming that way. Yuma tells Captain Corn that that's dirty, and that those kids came here just to see him. However, Captain Corn laughs and says "Like if I care!". Tetsuo notes the tracks just moved on their own. Tokunosuke explains that if they go that way, the next coaster will go into the ravine. Kotori asks if they can't do something, and Cathy tells them to look over there. Tetsuo notes the track switch is next to them, as he holds himself in the rails, over a deadly fall, with the other members of the gang holding themselves on him. Tokunosuke says they can use the track switch to move the rails back. Cathy then "jets", jumping over the others and getting back to the track. Noticing a coaster is coming, she rushes towards the switch, and switch the lever. Captain Corn's lever is changed together with that one, hitting his genital, which makes him get to the floor in pain. Cathy tells Yuma through the projection that the rails are back in place, and Yuma says that's great; his hand is empty, but now he can attack. 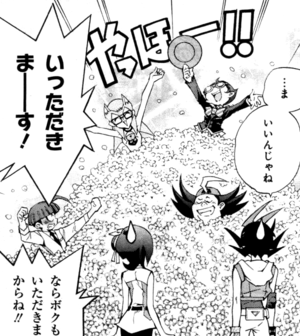 The gang eat the popcorn.

Yuma says to himself that everything is riding on this draw, and "jets", declaring his turn. Looking at the drawn card, Astral says now they have all they need to win, with Yuma activating "Remember Attack", explaining that it reactivates the effect of a previously negated Spell Card. He doesn't know what card to reactivate, and Astral tells him to detonate the shell of "Hope Buster". Yuma smiles and declares the reactivates "Hope Buster", saying that Captain Corn is going to take the ATK of "Blackship of Corn" in damage. Captain Corn asks how could he lose to this "corn-founded", as the shell detonates, destroying "Blackship of Corn", reducing Captain Corn's Life Points to 0 and making him pop into a pile of popcorn. Later, Tokunosuke is amazed at all that popcorn, but Takashi says they shouldn't eat it without permission. However, Yuma says it's probably fine, as Cathy, Tetsuo, Takashi and Tokunosuke eat the popcorn inside the pile, and thank for it. However, as Astral absorbs Captain Corn's "Number", a man appears and says that defeating Captain Corn is really something. Yuma and Astral turn behind, noting the man is Mr. Heartland.

Turn 3: Captain Corn
Captain Corn activates the effect of "No. 50: Black Ship of Corn", detaching an Overlay Unit to destroy "Garakarasu" and inflict damage to Yuma equal to its ATK (Yuma 3400 → 1900). He Sets two cards.

Turn 4: Yuma
Yuma Normal Summons "Gagaga Magician" (1500/1000) and Special Summons "Kagetokage" (1100/1500) from his hand via its own effect as a Level 4 monster was Normal Summoned. He overlays his two Level 4 monsters to Xyz Summon "No. 39: Utopia" (2500/2000) in Attack Position. Yuma activates "Hope Buster", which would destroy "Black Ship of Corn", but Captain Corn activates his face-down "Cornfused" to negate the effect.[Notes 1] Yuma attacks "Blackship of Corn" with "Utopia", but Captain Corn activates his face-down "Incornceivable", Special Summoning "Giant Kra-Corn" (1000/2500) from his Deck, and switching the attack target to it. As the ATK of "Utopia" and the DEF of "Giant Kra-Corn" are the same value, neither is destroyed, and no player takes damage. Yuma Sets two cards.

Turn 6: Yuma
Yuma activates "Remember Attack", activating the effect of his previously negated "Hope Buster", which destroys Captain Corn's "Blackship of Corn" and inflicts damage to him equal to its ATK (Captain Corn 900 → 0).