Yuma is about to lose his Duel against Cologne, when a strange event happens, turning the tables. At the end of that fierce battle, who appears again in Yuma's way is the Numbers Hunter who once defeated Yuma - Kaito! 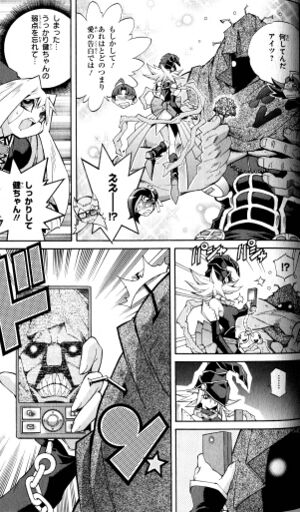 Using the "Gagaga" duo and his own "Number", Yuma manages to defeat Cologne, but the impact of his last attack throws her inside the "Doll House", which is still on fire. At that time, Cathy dives into the flames and tries to save her, saying that she was the one who abandoned Cologne, and had to save her. Cathy's noble attitude makes Yuma and Kotori get shocked, but in the hurry, Cathy mistakes and gets out of the fire carrying one of Cologne's dolls. This time, Yuma decides to go save Cologne, but, who comes out of the Doll House carrying her in his arms is Grandpa Demetto! Cologne's soul was supposed to leave her body, but Demetto gave her his own soul, which allowed her to stay alive. While he sends Cologne out of the fire towards Yuma, he is engulfed by the flames together with the field.

Cologne mourns the death of Demetto, who she loved. As she had nowhere to go now, Yuma invites her to live with him in his house. Cologne asks him why he is doing that, and he answers saying that everybody that Duels him becomes his friend. Cologne accepts Yuma's invitation, becoming friends with him and the rest of the gang.

Yuma, the Numbers Club and Cologne then run towards an iron bridge in order to escape from the Heartland Theme Park, but the exit locks, and Kaito and Orbital 7 appear. Kaito challenges Yuma to a Duel in order to obtain his "Numbers", but Mr. Heartland shows up from the upper stairs, interrupting them. Mr. Heartland smiles and orders Kaito to defeat the messenger from the Astral World in front of him. However, Kaito refuses to follow his method, and triggers Orbital 7's self-destruct mechanism, kicking him towards Yuma's gang, which destroys part of the bridge. This makes Yuma and his friends fall in the water under them, which allow them to escape. Mr. Heartland tells Kaito that this action was a big act of disobedience towards him and Dr. Faker. Kaito and Mr. Heartland, both irritated, stare at each other for few seconds. Kaito then just turns around and leaves the room, ordering Orbital 7 to go with him.

As Yuma and the others leave the park, Cologne explains to them that Kaito has became a Numbers Hunter to protect his little brother, who is ill. Astral tells Yuma that even though Kaito's reasons are noble, as long as he continues being a Numbers Hunter, someday they'll have to fight each other. Yuma replies saying that he knows that, and when that happens, he will not lose.

Turn 9: Cologne
Cologne attacks "Gagaga Girl" with "No. 22: Zombiestein", but the attack is stopped as "Zombiestein" cannot attack female monsters.