"A Three-Way Battle!!" (三つ巴の戦い！！ Mitsudomoe no Tatakai!!) is the twentieth chapter of the Yu-Gi-Oh! ZEXAL manga. 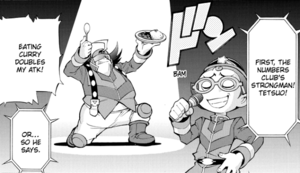 Tokunosuke as he introduces the members of the Numbers Club.

And finally, he introduces himself, Tokunosuke, as the man who knows what goes on behind every scene. Takashi comments with Tetsuo that Tokunosuke really got into that, and and that he guesses he liked the costumes, while Tetsuo says Tokunosuke sort of sound like the chairman over there, as he eats his curry. Then, they get into the helicopter, and move out on it, while Yuma and Astral run after them, yelling that they forgot them.

While Yuma complains about the others, who are totally getting carried away, Astral interrupts him saying that he is afraid. Yuma is surprised at that, as Astral explains possession by the "Numbers" amplify malice, and that he fears that the power the "Numbers" hold may not be a benevolent one. However, Yuma says that can't be true, to which Astral asks why he is so sure. Yuma answers saying that he doesn't know what the "Numbers" really are, but that if a ridiculously honest and serious guy like Astral is collecting them, they can't be all that bad. After a brief hesitation, Astral says he is not convinced by baseless logic, but that Yuma's baseless confidence is reassuring at times. Yuma then tells Astral he just trusts him, and Astral smiles. They then notice the Numbers Club's helicopter is landing, and hurry up. 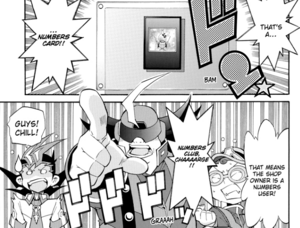 They then arrive at a restaurant called Poka Poka Restaurant, where people are making line to enter. Yuma complains saying that the place is right next to school, and that there was no need to go by helicopter. Tokunosuke notes Yuma and calls him. Tetsuo says that has to be the place, while Takashi agrees saying that is very suspicious, and Tokunosuke confirms it. Yuma asks what is so suspicious about it. Kotori answers saying that that place is always empty, and Tetsuo explains the food there is barely even edible. Yuma says he liked the food actually, and Kotori says he has no taste at all. Cathy then notes a "Number" card is framed at the back of the shop. Tokunosuke yells that that means the owner of the shop is a Number holder, an Tetsuo yells ordering the Numbers Club to charge. The Numbers Club then stand in front of the owner posing, as Tetsuo yells to him they have got him. The owner gets confused. Cathy and Kotori then tell him to put his "Number" on the line and Duel Yuma, while Yuma questions what she is saying. 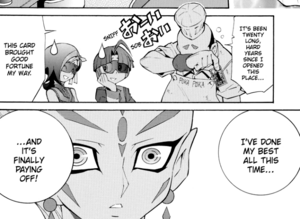 A while later, after the owner closes the shop, he explains he found that "Number" card down by the river a few days before, then the shop suddenly got popular. He further explains crying that it has been twenty long and hard years since he opened that shop, and that the "Number" brought him good fortune. He ends up by saying that he have done his best all that time, and that that's finally paying off. Tokunosuke says he doesn't think the owner is going to go evil on them, and Kotori says they can't take the poor guy's "Number" away, while Takashi says that was anticlimactic. 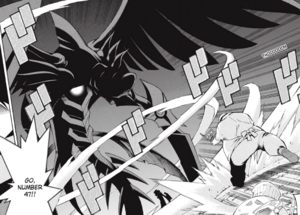 After they leave, Yuma and Astral hang around the city, as Yuma asks Astral what he was going to do about that "Number". Astral says that one can wait. Yuma asks him if he is sure about that, to which Astral replies saying he was happy to see that "Numbers" cards do not amplify human malice. He explains they must give evil power to those with bad personality, and benevolent power to those with good personalities. Yuma says that guy looked really happy as well. At that time, Yuma's stomach snores, and he decides to go back to the restaurant, and that he was going to pick up dinner for Akari and his grandmother too. At the restaurant, the owner looks to the "Number" card, and thanks it for the help again. At that time, Shark appears, and tells him to hand over that "Number" card, and that that power should not be in this world. Shark and the owner then Duel, but the owner is crushed by "a mysterious "Number" used by Shark. The impact of its attack throws the owner out of the restaurant, spreading his cards on the ground, as Yuma and Astral arrive there. 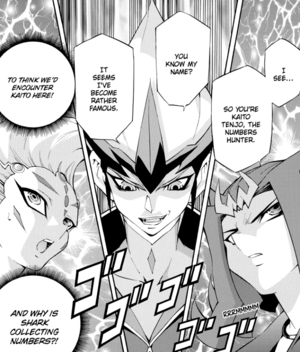 Shark picks up "No. 63: Shamoji Soldier" among the restaurant's owner's cards, as Yuma and Shark notice each other. Confused, Yuma asks Shark what he was doing there, but at that time, Kaito arrives there flying with Orbital 7, and lands on the restaurant's floor, and tells Shark to hand over that "Numbers" card, as Yuma and Astral recognize him. Shark notes he is Kaito Tenjo, the Numbers Hunter, and Kaito says that as Shark knows his name, he seems to have became rather famous, as Astral is surprised on encountering Kaito there, and confused about Shark. Luna then appears, and tells Kaito that's because she told Shark about the truth. Kaito recognizes her, as he takes her hood off, and tells Yuma and Astral it's a pleasure to meet them. Astral, shocked, asks if she can see him, and she introduces her, saying that she is Luna, and that she used to assist Dr. Faker. Yuma confused asks why she is with Shark, if she is Dr. Faker's assistant. She answers saying that that's because she asked him to obliterate the "Numbers". Kaito says to himself that then, that's their motive. Yuma explains her the power of the "Numbers" isn't bad, and that if a good person had them, it would be okay. However, Luna explains that "good power or bad power" isn't the problem - the problem is that power's very existence; As such a power exist, people would fight over it, and the world would be destroyed. Yuma says that she doesn't know that, but she says that she does, and that the fight had already begun. She explains that Dr. Faker and Mr. Heartland plan to destroy the Astral World, and this one as well, and asks Kaito to confirm it. Kaito hesitates, as she laments that for his brother Haruto's sake, he couldn't disobey those two, and calls him a poor little puppet. Angry, Kaito yells that he doesn't need her pity, and that he would take her and Shark's "Numbers" right then, along with their souls, as he throws his Photon Hand towards them. However, Luna puts her hand over the amulet on her chest, which creates a kind of barrier covering her, Shark, Yuma and Astral, and reflecting the Photon Hand, as she says that tactic wouldn't work on her. 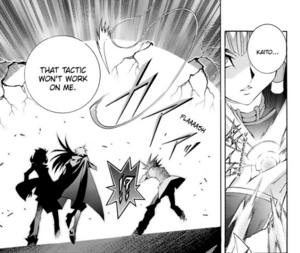 Then, the four are instantly transported to the outskirts of Heartland City. Yuma asks where they are, and Luna answers saying that they are outside the range of Orbital 7's power. She then turns around, and tells Shark they should leave, because it wasn't yet time to fight those two. Yuma and Shark stare at each other for a moment, and Shark tells him that he would wipe out his "Numbers" as well one day, as he turns around and leaves with Luna. Yuma asks what in the world happened to make Shark go after the "Numbers", and Astral says that whatever the reason, he had joined the battle over the "Numbers", and that they must be wary.

Later, Yuma and the Numbers Club go to Poka Poka Restaurant. The owner mourns about his card, while Kotori says that his food tastes awful, and Tetsuo says that curry cuts his ATK in half.

The Duel is shown from an unspecified turn. Shark controls "No. 47: Nightmare Shark" in Attack Position, while Number 63's holder controls no cards.