"Menacing Force!!" (の！！ Kyōi no Butai!!) is the twenty-third chapter of the Yu-Gi-Oh! ZEXAL manga.

The Duel between Yuma and Eviluder continues.

Eviluder declares the launch of his "No. 42: Starship Galaxy Tomahawk", which appears in the sky, covering the buildings. Astral is shocked at its 3000 DEF, but Yuma tells him not to worry, since Duels aren't about monster size, and its in Defense Position. Eviluder smirks, and tells Yuma he still doesn't know the terror of his fleet, as he activates the effect of "Starship Galaxy Tomahawk", detaching an Xyz Material to Special Summon 4 "Battle Eagle Tokens" to his field. Tokunosuke is shocked at his Summoning 4 monsters at once, but Takashi and Kotori say they've got less ATK than Yuma's "No. 39: Utopia", so they can't attack. Eviluder smirks again, and declares the "operation" is just beginning, as he activates "Covering Fire, increasing the ATK of all his tokens to 2500. Cathy notes they've now got the same attack as "Utopia", while Luna comments Eviluder is a powerful "Numbers" user, seeing his four 2500 ATK monsters. Eviluder orders all units of the "Battle Eagle Squadron" to open fire. 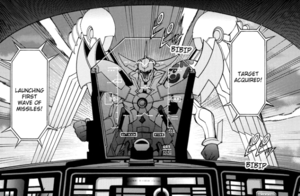 "Battle Eagle Token I" locks "No. 39: Utopia" as the Attack target. 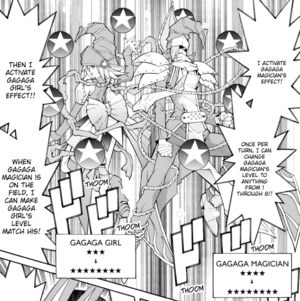 Yuma gathers the "Gagaga" duo and matches their Levels.

Astral asks Yuma if he's alright, as his Life Points marker goes down to 1500. Yuma affirms, saying that Eviluder just took a huge chunk of his Life. He also wonders if that's what he did to Tetsuo - a concentrated attack, as he looks to the wound the missile caused on him. Astral comments "Starship Galaxy Tomahawk" is a powerful Xyz Monster, and that's it is a nuisance. He also says that since no monsters are left in Attack Position, they'd have to take down that mother ship. Yuma replies by saying that it's got a DEF of 3000, and that even if they brought "Utopia" back, he's only got an ATK of 2500. However, Astral says there's still a way, and Yuma notes the "Gagaga Girl" in his hand. Yuma says he got it - he's going to use the effect of "Gagaga Girl", but Astral says that although by Xyz Summoning with "Gagaga Girl" they can reduce the ATK of an enemy to 0, there's no point on doing that of "Starship Galaxy Tomahawk", as it is in Defense Position. Yuma agrees, but Astral says he's right on using the effect of "Gagaga Girl", and tells Yuma to think hard - their Deck holds one monster whose ATK surpasses the DEF of "Starship Galaxy Tomahawk". Yuma notes who it is, and declares that settles it, as he draws. 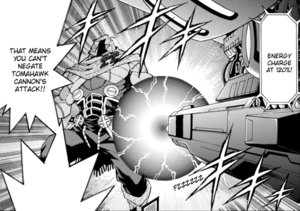 Yuma Summons "Gagaga Girl" in Attack Position, who's scared seeing the size of "Starship Galaxy Tomahawk". Eviluder declares an ATK of 1000 is a suicide attack, and that he would bombard Yuma to smithereens. However, Yuma misunderstands what he said, and says there's nothing wrong with his "bum". Yuma activates "Gagaga Academy Emergency Network", Special Summoning "Gagaga Magician". Tokunosuke says there it is - a "Gagaga" upperclassman. Yuma uses the effects of his "Gagaga" monsters to make both Level 8, and Overlays them to Xyz Summon "No. 22: Zombiestein" in Attack Position. Yuma says he's going to avenge Tetsuo, as Eviluder is shocked at the 4500 ATK of "Zombiestein". Tokunosuke celebrates that by that way, Yuma is going to take down that starship. Cathy recalls that "Zombiestein" can't attack girls, and wonders if that won't matter, but Kotori says starships aren't male or female, and tells Yuma to go get it. Yuma orders "Zombiestein" to bring down "Galaxy Tomahawk", as "Zombiestein" jumps towards it. However, Eviluder says "Galaxy Tomahawk" wouldn't fall to an attack like that, as he activates "Spaceship Barrier", which would negate the attack, but Yuma activates the effect of "Zombiestein", negating the Trap Card, as he declares the attack - Zombiestein Fist. An explosion occurs, and Cathy and Kotori celebrate holding hands, but quickly separate, noting what they were doing. Eviluder smirks and tells Yuma to take a good look to see who is winning. He declares that he activated "Tomahawk Cannon" before Yuma attacked, saying that the effect of "Zombiestein" only works once per turn. A cannon appears in "Galaxy Tomahawk", as it declares "energy charge at 120%". The cannon then fires, destroying "Zombiestein". 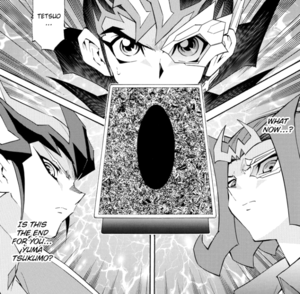 Yuma bets everything on his face-down card.

Kotori mourns about the destruction of "Zombiestein", as Takashi says that's bad. Yuma wonders what he should do, and Astral tells him there's still a way - their deck still has the means to defeat him, and tells Yuma to activate "Reload". Yuma does so, shuffling the 2 cards in his hand into his Deck, and drawing 2 new cards. Astral hopes one of the drawn cards is "that card", as Yuma notes one of them is a card he got from Tetsuo. Tetsuo is shown muttering Yuma's name, still unconscious in the hospital. Back to the Duel, Astral tells Yuma to Set a card, and Yuma does so, ending his turn. Eviluders says Yuma has no monsters, and even if he did, they would be powerless against his Galaxy fleet. He declares that he is going to wipe out Yuma's forces on the next turn, and that he would end up just like "that other Duelist", while Shark wonders what is Yuma's face-down card, and Kaito wonders if that's the end for Yuma.

Turn 3: Yuma
Yuma Normal Summons "Gagaga Girl" (1000/800), and activates "Gagaga Academy Emergency Network", which allows him to Special Summon a "Gagaga" monster from his Deck - he summons "Gagaga Magician" (1500/1000). Yuma activates the effect of "Gagaga Magician", increasing its Level to 8. He then activates the effect of "Gagaga Girl", making her Level equal to that of "Gagaga Magician" - 8. Yuma Overlays his two now Level 8 monsters to Xyz Summon "No. 22: Zombiestein" (4500/1000) in Attack Position. Yuma attacks "Starship Galaxy Tomahawk" with "Zombiestein", with Eviluder activating his face-down "Spaceship Barrier", which would negate the attack, but Yuma chains with the effect of "Zombiestein", detaching an Xyz Material and discarding 1 card to negate the effect of Eviluder's current face-up cards. Eviluder then activates a second face-down card, "Tomahawk Cannon", which negates the attack of "Zombiestein" and destroys it. Yuma activates "Reload", shuffling the 2 cards in his hand back to his Deck in order to draw 2 other cards. He Sets a card.