"Kaito's King!!" (カイトの！！ Kaito no Kyoku!!) is the twenty-fifth chapter of the Yu-Gi-Oh! ZEXAL manga.

This chapter was first printed in Japanese in the 2/2013 issue of V Jump, released on December 21, 2012. It was later reprinted in English in Weekly Shonen Jump Alpha, in the January 7, 2013 issue.

With the "Numbers War" declared, the Numbers Hunters start moving. This time, another of Kyoji Yagumo's assassins goes after Kaito and confronts him.

During the night, Kaito enters his brother's room in the Heartland Tower. Haruto awakes and notices Kaito, who smiles and tells Haruto they are leaving. Kaito then leaves flying with Orbital 7, taking Haruto on his arms, as the Heartland Tower explodes.

Somewhere, Hishakaku is sitting inside a typical Japanese home, with a small water fountain outside, playing Shogi alone. He is shown moving the "Hisha" piece (equivalent to the "rook" in Chess). Beside him, there are many Duel Monsters cards spread, with a notebook over them, from when Kyoji Yagumo contacts him, saying that Kaito did just what Kyoji thought he would, and telling Hishakaku now it's his turn. Hishakaku smiles, as he replace the "Hisha" piece on the board with a Duel Monsters card face-down. He says that he is going to capture Kaito's king, and that in this "Numbers War", he is going to win by checkmate. 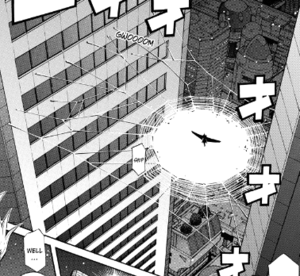 As Kaito and Haruto fly, Haruto asks his big brother where they are going. Kaito says their going somewhere safe, and explains that there's going to be a war, and that if Haruto stays there he'll get pulled into it. At that moment, Kaito notes several spider webs are spread between the buildings where they are flying, which start getting twisted around Kaito and Orbital 7. Haruto slips from Kaito's arms and fall, with Kaito yelling his name, but a spider webs comes down from the top of one of the building and takes Haruto. Kaito notes that's Kyoji who's got Haruto, and holds him on his arms. Kyoji says that that's just as he expected - now that he have declared war, it's dangerous for Kaito to stay at Heartland; he knew Kaito would take Haruto to guarantee his safety, and winks. With swifts movements, Kaito gets rid of the spider webs holding him, and lands on a round area, where the spider webs form a kind of field. Kaito says that's interesting, and asks Kyoji if he wants to settle this now. However, Kyoji says he actually got another opponent for Kaito. Hishakaku then appears from behind Kyoji, introducing himself and telling Kaito he will face him on his final game. Kaito says it's fine, as he will hunt them all in the end, as Orbital 7 goes back to his normal form and Kaito prepares his D-Pad. Kaito and Hishakaku then being a Duel in the web field.

Meanwhile, Yuma is sleeping on his house, dreaming that he is Dueling, when he yells "Hope Sword Slash" and punches the air, falling from his hammock and waking up. He notices Astral is awake and asks him if he is not sleepy yet, but Astral says that he never sleeps, and Yuma remembers he knows that. Cologne says she is surprised Yuma can sleep - the "Numbers War" is underway, the enemy could strike at any moment. She tells Yuma he should be a nervous wreck. Yuma says a good kid goes to sleep at night, and Astral says that is for the best, and tells Yuma to rest when he can, to conserve energy for the coming battle. Yuma's Duel Gazer then rings. Yuma answers, asking Cathy what's up, since it's kind of late. Cathy apologizes, but says that she thought Yuma should know something - they got a report of a Duel on one of the city's main streets. Yuma asks Cathy if they didn't quit the Numbers Club, and Cathy explains they quit the flashy costumes, but still collect information on "Number" cards and Duels. Yuma asks what's so weird about a Duel, besides being so late in the night, and she says that it appears that Kaito is one of the Duelists, surprising Yuma and Astral. Astral then says to himself that the "Numbers War" has really begun, as Yuma says they're on it, and tells Astral to hurry. 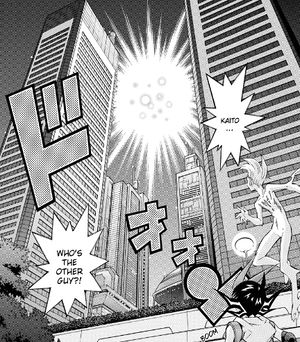 Yuma and Astral note the shine of "Galaxy-Eyes Photon Dragon" over the buildings.

Back to the Duel, Kaito begins, telling Hishakaku he will hunt him, soul and all, as he draws. He Special Summons "Photon Slasher", then Normal Summons "Photon Crusher". He releases both, explaining that doing so allows him to Special Summon "this" monster from his hand. A four-sided shining star appears, which Kaito holds, as he declares "Galaxy, shining in the darkness! Become a ray of hope and live within my servant!". He then throws it up, declaring "Descend to me! Incarnation of light!! Come forth, "Galaxy-Eyes Photon Dragon"!!". Kyoji watches with a serious face as the star absorbs the light around them. As Yuma and Astral run, Yuma notices the light and recognizes it as being from "Galaxy-Eyes Photon Dragon". Astral tells Yuma to hurry. Yuma then sees Kaito, and asks who the other guy is. Astral then tells Yuma to look at the top of the building, and he notes Kyoji standing there, still with Haruto on his arms, and smiling as he watches "Galaxy-Eyes Photon Dragon" descend. Astral says Kyoji must have brought the Number Hunter who is Dueling Kaito. Yuma says Kyoji is after Kaito too, and says he thought they were both on Dr. Faker's side. Astral says it appears not - Kyoji Yagumo intends to annihilate all of them at once. Kaito says that the player cannot attack on the first turn, so he Sets 2 cards and ends his turn. 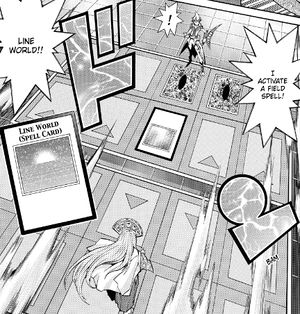 He says that "Galaxy-Eyes Photon Dragon" is a worthy opponent, but it's time he puts Kaito in check, and he draws. Hishakakue smiles seeing the card he drew, and activate the Field Spell Card "Line World", making the card zones appear in the field. He declares that Duel Monsters it's a Shogi board to him - every card is a piece moving just as he predicts. Hishakaku Summons "Line Monster K Horse", explaining that "Line World" increases the ATK of all "Line Monsters" by 500, and activating the effect of "K Horse" - when he has successfully Summoned this card, he destroys a card a "Knight's move" away. "K Horse" gallops through the Zone in front of him and the Zone diagonally to the right, where one of Kaito's Set cards is, slashing it into two parts. Yuma says he destroyed a face-down card, as the card goes into Hishakaku's direction, confusing Kaito. Hishakaku explains the greatest effect of "Line World" is that all "pieces" destroyed by your opponent go to his Graveyard. Kaito is surprised that Hishakaku got his Trap when he destroyed it. Hishakaku then activates the second effect of "K Horse", Special Summoning "Line Monster Spear Wheel" from his Deck. He explains the effect of "Line World" powers up "Spear Wheel" as well, and activates "Quick Star: Level 3", making the Levels of his two monsters 6. Hishakaku says that the game turns on flashes of insight, and tells Kaito to Summon all the tough monsters he wants - they don't scare him. Hishakaku overlays his two monsters to Xyz Summon "No. 72: Line Monster Chariot Hisha". Astral says there "it" is - a "Number". Hishakaku explains the effect of "Line World" boosts its ATK as well, making it 3000, like that of "Galaxy-Eyes Photon Dragon". Yuma notes that, but Astral says "Galaxy-Eyes" has a powerful effect - in battle, it can banish the opponent monster and absorb its Overlay Units. 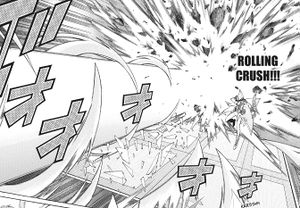 Kaito tells Hishakaku he will never defeat his "Galaxy-Eyes" that way, but Hishakaku tells Kaito he still doesn't understand how terrible "Line Monsters" are, as he activates the effect of "Chariot Hisha", Rolling Crush - he explains he uses one Overlay Unit to destroy all cards in its path. Its spiked wheels detach from it, violently rolling over Kaito's cards and destroying "Galaxy-Eyes Photon Dragon" and his last face-down card. Kaito says that's insane - he destroyed two cards at once. They both go to Hishakaku's Graveyard, as Yuma says that now "Galaxy-Eyes" is in Hishakaku's Graveyard. Kyoji smiles and asks Kaito what he will do now.