After Kaito's fierce battle with Hishakaku, Yuma takes him to his house in order to treat his wounds, but a Shadow approaches them, putting Kotori in danger and luring Kaito.

Yuma yells that he's gonna jet as he dives off the spider web and catches Kaito by the arm. Astral asks Yuma what he's planning, but Yuma hasn't thought that far ahead. Fortunately, Orbital 7 swoops in and saves them, but his recent crash has left him damaged and belching smoke, and they crash land in the river.

Looking out over the city, Kyoji Yagumo reflects on Hishakaku's loss to Kaito, though he feels that the Number Hunter served his purpose since he took out Kaito. A shadow points out that the only ones left are Yuma Tsukumo and Ryoga Kamishiro, and he states that he'll take care of them. 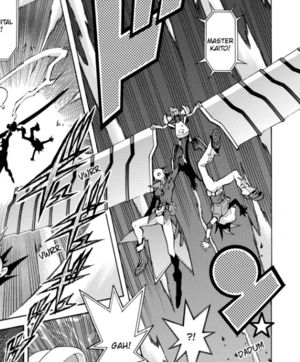 Kaito is dreaming about Haruto, back when they lived in their cottage. He wakes up in bed in Yuma's house, below the attic that Yuma sleeps in, watched by Cologne. Wondering where he is, Kaito climbs into the attic, noting the mess in the room. Cologne sits motionless, pretending to be inanimate, and inwardly freaks when he looks right at her, but he's just noticed the picture of Yuma's parents, and he looks at it, intrigued, before passing out. Yuma and Kotori find him sprawled on top of a terrified Cologne. After they take him back to bed, Kaito recovers enough to ask why he's at Yuma's house, ands Yuma reminds Kaito that he saved him. Kaito remembers the explosion that Hishakaku set off. Then he looks at Yuma, activating his Duel Gazer tattoo and seeing Astral's obscured form hovering next to Yuma. With his Photon Change active, he throws the blankets aside and demands his Duel Disk. Yuma tells him to take it easy, but Kaito refuses sympathy from his enemies. Before they can come to blows, someone's stomach gurgles, and Kaito immediately denies it before Kotori can say anything. Yuma admits it was him, and both Kotori and Astral shoot him looks. He suggests that they eat. 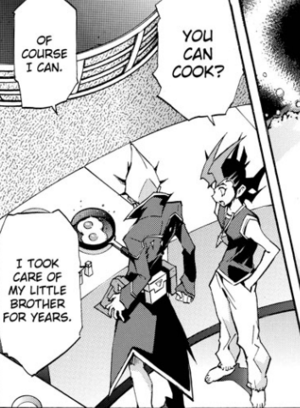 Kaito decides to cook himself.

Kotori's ready to handle the cooking, and Yuma offers to help, suggesting they start with fried eggs. Unfortunately, their first attempt is a burned failure. Kaito decides to cook himself, having done so for Haruto for many years, but the distraction of his past burns the edges on his eggs. Yuma offers to get something, but by then, Akari and Haru have arrived with the necessary ingredients for dinner. As they eat, Kaito muses that this is family. Akari asks him how he knows Yuma, and Kaito begins to huffily claim that it should be obvious: he's a natural born Duel - and then Yuma spits out his dinner all over him in a panic, cutting him off as Akari gets suspicious. Kotori and Akari watch in embarrassment as Yuma cleans the food from Kaito's face, and he covers up by claiming that the two of them are a duet in karoke, stating that Kaito has a killer voice. Though he's surprised, Kaito keeps quiet, and Akari is pacified to the point that she suggests to sing with them next time. Yuma begs her not to.

Meanwhile, Orbital, having been swept out to sea, escapes from a bad-tempered angler-like fish, and he sweeps back to shore in shock, looking for his master. 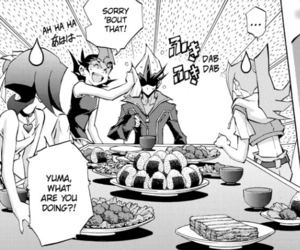 Kaito learns that Yuma isn't supposed to Duel and he asks why not. Yuma casually admits that he doesn't know; his father said that something crazy would happen if he Dueled, so he has to be careful. Kaito asks where Yuma's parents are, and Yuma explains that they're gone, his mom and dad went adventuring and never came back. They said something about finding a door to another world. Kaito and Astral are both intrigued, and Kaito asks if it was the Astral World. Yuma replies that he doesn't know, and he asks what's up with Kaito's family. But Kaito refuses to tell him, and though Yuma is disappointed, he admits that they can't be best buds right away. Akari then comes in with Kotori, telling Yuma to walk her home. Yuma walks her close enough, but then the shadow that had been conversing with Kyoji approaches her. 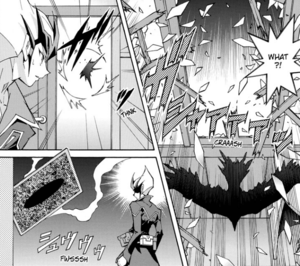 In Yuma's house, Kaito muses that Yuma's parents went to the Astral World, and Astral came to this one, while Haruto got his rotten powers for destroying the Astral World. He wonders if it's all connected. Then he notices a shadowy bird approaching, smashing through the glass and leaving behind a card with a note on it. Cologne sticks her head down from the attic in shock, and she sees Kaito leaving with a look of determination on his face. Cologne alerts Yuma as soon as he returns, and Yuma is shocked to see that it's a ransom note claiming that they have Kotori (despite Yuma just walking her home), and if Yuma wants her back, to Duel whoever sent the note. Cologne then tells them that Kaito went after the kidnapper. 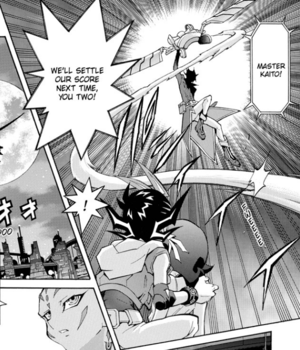 Kaito leaves, declaring that they will settle their score next time.

Kaito, with his Photon Change activated, approaches the kidnapper, Shadow, who is shocked to see that Kaito is still alive. Kaito claims that he can't be beaten by the likes of them. Shadow decides to start by getting rid of Kaito with his Shadow Deck, and their Duel begins. Both Orbital 7 and Yuma and Astral are en route, and Yuma and Astral arrive to see "Galaxy-Eyes Photon Dragon" wipe Shadow out with "Photon Stream of Destruction." Shadow vanishes, leaving a "Number" card behind. Kaito notes that that was disappointing as Yuma runs to the unconcious Kotori. He thanks Kaito, but Kaito simply claims to have been doing his job. Orbital 7 arrives and plucks Kaito from the ground, and Kaito tells them that they'll settle the score next time. Astral wonders if this means that Kaito thinks that he has repaid them. As Yuma cares for Kotori, he asks Astral if Kaito will tell them about himself someday. Astral expects that he will.

Meanwhile, Kaito and Orbital 7 have taken refuge at the harbour. Orbital asks where they are going, as they can't go back to Heartland. Kaito reassures him that he's already found another base, and they look at a massive circular building, as Kaito explains that this will be their new castle.