"A New Hope!!" (新しい希望！！ Atarashii Kibō!!) is the forty-ninth chapter of the Yu-Gi-Oh! ZEXAL manga.

Shark somehow manages to counterattack using the "Number" Kyoji trusted him; however, that's not enough to defeat E'Rah, and Shark ends up defeated, passing the baton to Kaito and Yuma. Kaito goes next and begins a new counterattack with his new "Number".

E'Rah laughs that she has snuffed out the light of Yuma and Astral's hope, and that shadow has become truth, before telling them to vanish. Yuma yelps in terror, and Kotori cries Yuma's name, as he will lose if the attack gets through. Shark snaps that their light isn't out yet, and he activates a Trap Card, "Spirit Coup", allowing him to activate a Trap Card from the Graveyard. He chooses Kaito's "Route Change", and uses it to divert the attack to himself. The attack of "Galaxy-Eyes Photon Dragon E'Rah" strikes Shark, reducing his LP to zero (erroneously listed as 800 instead of 300 before it drops). Luna screams Shark's name. Shark lifts his fist, gasping that his Deck doesn't have anything left to beat E'Rah, so all that he can do is leave the rest to them. He tells Yuma, Astral and Kaito to take E'Rah down and save Yagumo, before offering a final present. He activates the effect of "No. 37: Hope Woven Dragon Spider Shark", "Last Resurrection", reviving the other monsters that were destroyed on the same turn as "Spider Shark". "No. S39: Utopia the Lightning" and "Galaxy-Eyes Photon Dragon" are both Special Summoned, but E'Rah snaps that Shark's struggles are useless. Since they Special Summoned new monsters, E'Rah activates the effect of "Sea of Rebirth", Special Summoning an equal number of monsters from her Deck. She Special Summons "Strain Huge" and "Strain Filament" in Defense Position.

Shark's eyes close as he falls through space, and Luna whispers his name, while Kotori whispers, "Oh no..." Shark lands in E'Rah's graveyard, and Yuma screams his name. E'Rah laughs that Ryoga Kamishiro will be one of the grave markers, and the rest of them will soon follow. The wisps of material stirred up by Shark's fall float around Kaito's hand, and he warns E'Rah that he'll double Ryoga's force and send it back at her. With 2000 LP, Kaito warns E'Rah that he'll never forgive her.

He declares his turn and draws. Astral asks Kaito what he intends to do, reminding Kaito that they need to disrupt her endless combo to win. Kaito replies that he knows, and he knows how to do it. He activates the Spell Card "Revelation of Hope", sending a non-Xyz Dragon-Type monster he controls to the Graveyard, and then Xyz Summoning a monster with a Rank equal to the monster's Level. He holds up the blank "Number", and begs Haruto as his last wish to hi to grant his foolish big brother the power to save them all. Haruto's voice agrees, telling Kaito that they'll fight together. Kaito's eyes snap open, and he sends "Galaxy-Eyes Photon Dragon" to his Graveyard,m combining it with the power of Haruto's "No. 28: Titanic Moth" and chants, "Twin hopes sleep in my memory! Pierce the river of darkness separating those hopes and make them one! Xyz Summon! Come forth, No. 38: Hope Harbinger Dragon Titanic Galaxy!" As the new "Number" appears behind Kaito, Orbital 7 tells Haruto to look; that new hope is his and Master Kaito's; their new "Number".

Astral realizes that Kaito has established a loop combo, and Kaito agrees; the effect of "Galaxy Journey", which lasts for the entire turn, Special Summons "Titanic Galaxy" and the effect of "Titanic Galaxy" attaches "Sky of Endless Night" to itself. Then since it is still the Battle Phase, "Titanic Galaxy" can attack again, attacking and destroying "Strain Huge". Kaito then activates the Spell Card "Serial Claw", since his monster destroyed a monster in battle, increasing its ATK by 500 and allowing it to attack again. He attacks and destroys "Utopia the Lightning E'Rah" with the "Titanic Burst of Destruction" attack of "Titanic Galaxy"; causing E'Rah to fall to 1500 LP via the effect of "Shifting Land". Kotori cheers that Kaito just took most of E'Rah's LP, and Tokunosuke cheers that "Utopia the Lightning" can still attack, while Takashi notes that in other words, with this attack, Yuma's team wins. Yuma tells Kaito to go, and Kaito warns E'Rah that she toyed with the fates of Haruto, Ryoga, Yagumo, and himself, and now she's going to pay for it. He asks E'Rah if she is ready to repent, and attacks "Galaxy-Eyes E'Rah" with "Utopia the Lightning", pulverizing it with "Hope Sword Lightning Slash".

Furiously, E'Rah screams and she warns them not to get cocky and that their fate is still despair, activating a Trap Card, "Last Groan", which allows her to Special Summon a "Strain" monster from her Deck since she controls no monsters. She Special Summons "Strain Desmosome", whose ATK is half her opponent's LP, resulting in both the ATK of the monster and E'Rah's LP sitting at 1000. Yuma groans in frustration that E'Rah isn't down yet, and Kaito ends his turn.

E'Rah declares her turn and uses the effect of "World Cycle" to draw "Strain Endo" from her Deck and destroy it. This allows her to activate its effect since her LP is lower than her opponent's, destroying all cards she controls and Special Summoning as many "Anti" monsters as possible from her Deck. She Special Summons "Anti the Ray", "Anti the Sky", "Anti the Abyss" and "Anti the Earth", explaining that they hold the power to seal the elements of the Astral World. Cathy gasps that there are four of them, and "Tetsuo points out that they only have 100 ATK, so they're not dangerous. But E'Rah activates the effect of "Anti the Ray", layering it with the other "Anti" cards she controls to Special Summon another "Anti" monster. She chants, "Come forth! Incarnation of despair governing all darkness and chaos! Anti-Hope, God of Despair!" Beholding the unseen monster, Yuma asks what it is.

Turn 9: E'Rah
E'Rah has just declared a direct attack on Yuma. Shark activates his face-down "Spirit Coup", enabling him to select one Trap Card in the Graveyard and use its effect. He chooses Kaito's "Route Change", making himself the new attack target (Shark 300 → 0). During the End Phase, the second effect of "No. 37: Hope Woven Dragon Spider Shark" activates, Special Summoning all other monsters that were destroyed during the same turn as it; "Galaxy-Eyes Photon Dragon" (3000/2500) and "No. S39: Utopia the Lightning" (2500/2000) are Special Summoned back to the field. E'Rah then activates the effect of "Sea of Rebirth", allowing her to Special Summon an equal number of monsters from her Deck. She Summons "Strain Filament" (???/0) and "Strain Huge" (???/0). 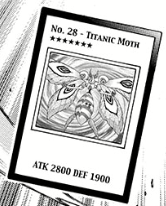 The "Titanic Moth" card as it appears in this chapter (in the English version).
Retrieved from "https://yugipedia.com/index.php?title=Yu-Gi-Oh!_ZEXAL_-_Rank_049&oldid=3966623"
Category: