Atem and his friends from the modern world faced Zorc Necrophades in the final battle of the Shadow RPG. This served as an alternate ending to Atem's Diaha with Zorc.

Yugi Mutou, Katsuya Jonouchi and Hiroto Honda tried fighting Zorc with Duel Monsters. Anzu Mazaki came up with a way of showing Atem his name, through which he was able to summon The Creator God of Light, Horakhty to defeat Zorc.

In the Shadow RPG, Dark Yugi and Dark Bakura replayed their past lives as Atem and Zorc Necrophades, through a tabletop game.[1] They replayed the Diaha between Atem and Zorc,[2] which had previously ended with both participants being sealed in the Millennium Puzzle and Atem forgetting his name among other things.[3][4]

Atem's friends from the modern world, Yugi Mutou, Katsuya Jonouchi, Anzu Mazaki, as well as Bobasa, had also entered the World of Memories, as non-player characters in the Shadow RPG.[2] Bobasa transformed into Hasan and protected Atem, while Dark Bakura had frozen time. Yugi and the others found Atem's name in his tomb,[4] but could not read the hieroglyphs, so they memorized their appearance.[5]

In this recourse of the battle, Atem did not seal his and Zorc's souls within the Millennium Puzzle. When he was facing Zorc, largely defenseless, Yugi, Jonouchi, Anzu and Honda arrived to help him.[6]

Anzu tended to Atem, who was injured from his battles with Thief Bakura and Zorc. Yugi, Jonouchi and Honda stepped up to fight Zorc. Yugi referring to Atem as "the other me" led Zorc to realize that they were Atem's friends from the modern world. He warned them that regardless of how many of them there were, they would not win the battle of memories and would die with the pharaoh.[5] 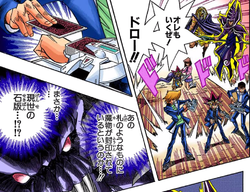 Zorc observes as Duel Monsters cards, "the stone slabs of the modern world" are used against him.

Yugi, Jonouchi and Honda readied their Duel Disks. Yugi used the Duel Monsters Deck that he and Atem had constructed together and played the "Dark Magician" card, summoning Mahado. This surprised Zorc, who had defeated the Dark Magician in the previous Diaha. Zorc inferred that the ka were sealed in the cards, "the stone slabs of the modern world". Jonouchi and Honda summoned Red-Eyes Black Dragon and Gagagigo, through their corresponding cards.[5]

Mana was impressed with the strength of Atem's friends ba and their desire to protect him. Isis wondered who these people who could summon ka and protect the pharaoh were.[5]

Dark Magician and Red-Eyes Black Dragon attack Zorc with "Magic Blast" and "Black Fire Bullet", which seemed to phase him at first, but he relented. Zorc fought back with "Zorc Inferno", dislodging the ground beneath Atem and his companions. Red-Eyes was destroyed by the blast from the attack, dropping Jonouchi's Life Points to 1600, while Hasan shielded everyone else.[5] 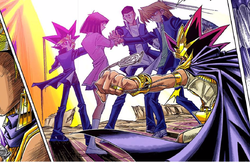 Atem's name appears on the cartouche.

Hasan informed the group that they could not win with cards alone and reminded them of their mission to find the pharaoh's name. Jonouchi replied that they had done that, but could not read it and burned the hieroglyphs into their memories. As Hasan told them that they needed to find a way to make the pharaoh see, his mask fell apart, leading Yugi to realize that he was Shadi. Hasan held up his shield for the duration of the attack, but disappeared afterwards.[5]

As Zorc prepared for his next attack, Anzu noticed the cartouche hanging from Atem's neck. She got herself, Yugi, Jonouchi and Honda to think of the hieroglyphs they had seen for Atem's name and try to use the reality-warping powers they had in the RPG to etch the name onto the cartouche.[5] 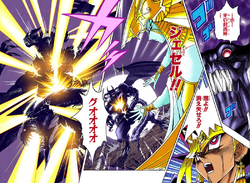 On seeing his name on the cartouche, Atem heard an apparition of his father, Akhenamkhanen say that justice lies in the name of the gods and that the pharaoh descends from the gods. He instructed Atem to unite the three gods in the name of the king.[7]

Atem announced his name, breaking its seal. This caused Zorc's attack to be swallowed into light and the three god cards to emerge from Yugi's Deck. With them, Atem summoned Ra, God of the Sun, Slifer, God of the Heavens and Obelisk, God of the Earth. In the name of the king, he united them into The Creator God of Light, Horakhty, who attacked Zorc with "Sublime Light Djeseru",[7] destroying him[8] and Dark Bakura.

As everyone celebrated Zorc's defeat, Atem also reflected on those who had lost their lives, including Kalim, Shada and Siamun Muran. Horakhty stated that "Atem" was both the name the pharaoh had lost and the spell necessary to drive back the shadows. She also expressed that his power alone was not enough to break the 3000-year seal and that his friends were truly the keys necessary to unlocking his name.[8]

As Atem's friends congratulated him, Anzu habitually referred to him as "Yugi", causing them to reflect on the fact that they had just learned his real name. Having shared his name with Yugi for so long, having his own name felt strange to Atem. He thanked Anzu for giving him the cartouche, which saved him and thanked her, Yugi, Jonouchi and Honda for finding his name.[8]

Although Zorc was defeated the ground remained unstable,[8] due to the "Natural Catastrophe", Dark Bakura had initiated[4] and Zorc's attacks.[5] Atem's soldiers stressed the urgency in evacuating and Atem asked Isis and Mana, who else was left. Isis reported that she had not seen Seto or Akhenaden, the High Priest of Darkness in a while. Not knowing what was going to happen to the World of Memories, Atem insisted that his friends must find a way to leave. They did not want to leave without him, but Atem insisted that he must see the world of his memories through the future and assured them that he would come back to the real world too. After being thanked by Isis and Mana, Yugi, Anzu, Jonouchi and Honda flew upwards to where the Millennium Puzzle from the real world stuck through the sky.

Atem went to the palace in search of Seto. Seto, who was then possessed by Akhenaden,[8] challenged Atem to a Duel.[9]