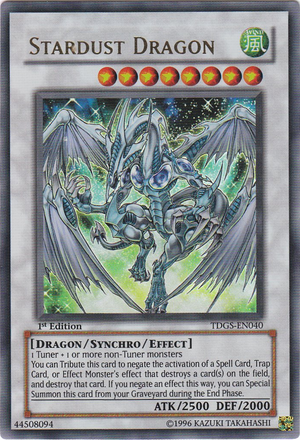 One of the many new Synchro Monsters, "Stardust Dragon", takes flight. Coming from the new series, Yu-Gi-Oh! 5D's, this is the signature card used by Yusei Fudo and also one of the Five Dragon cards held by the Signers.

Despite a low ATK for a level 8 monster, this card proves to be one of the most useful Synchro monsters ever, if not the most useful. It can negate most of Staple cards like "Monarchs", "Fissure", "Smashing Ground", "Sakuretsu Armor", "Mirror Force", "Heavy Storm", "Mystical Space Typhoon", "Torrential Tribute", etc, by Tributing itself, and then comes back to the field at the End Phase, which means you can use its effect again and again. "Stardust Dragon" can also negate the effects of the many destructive dragons, such as: "Dark Armed Dragon", "Judgment Dragon", and "Red Dragon Archfiend".

"Stardust Dragon"'s main weakness is being Removed from Play, meaning it cannot be revived with its effect. So "Macro Cosmos" and "Dimensional Fissure" will restrict "Stardust Dragon" to only negating and destroying 1 card and leaving it incapable of reviving itself. The popular "Caius the Shadow Monarch" will remove "Stardust" from play, without giving it the chance to negate his effect, since it doesn't "destroy" - using "Imperial Iron Wall" will help you get rid of this problem. Another danger is "Snipe Hunter", whose effect cannot be negated by "Stardust Dragon", since it is unknown at the time of activation if it will destroy anything. Other weakness include returning to the Extra Deck, and being destroyed in battle by stronger monsters.

And don't forget that since "Stardust Dragon" revives itself every End Phase, use "Card of Safe Return" to your advantage to further punish your opponent every time they force you to temporarily tribute "Stardust Dragon".