Yuma Tsukumo is a potential partner and opponent in Yu-Gi-Oh! Duel Arena. This is a video game depiction of Yuma Tsukumo, a character from the Yu-Gi-Oh! ZEXAL anime.

In the beta, he had a default of 5 Rental Points, and his partner number was P005.

A middle-schooler who gives everything his all. He dreams of becoming a Duel champion but still has a long way to go. His meeting with the life form "Astral" drags him into the "Number" incident..

Tribute Summon is a method to summon a powerful monster by sending monsters from the field to the Graveyard. Consider keeping monsters in the field for that.

No need to worry when you have the same monsters in your hand! Use them to Xyz summon and feel the flow!

An Xyz Deck centered on "No." and "Djinn" cards. Your first goal should be an Xyz Summon of "Number 39: Utopia". Use the effects of cards like "Goblindbergh" and "Kagetokage" to instantly bring the Level 4 Xyz Materials to the field! 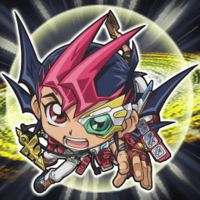