Yuna Goha (ゴーハ・ユウナ Gōha Yuuna) is a character in the Yu-Gi-Oh! GO RUSH!! anime and the secondary antagonist of the second story arc. She is the current president of the Goha Company, who was reported missing in the Alien Residential Area by London Kirishima, who hires UTS to find her.[2] 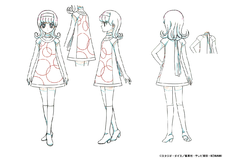 Lineart of Yuna depicting her from different angles.

Yuna is a young lady of elementary school age[3] with green eyes and shoulder-length blonde hair which curls up distinctly at the tips and is restrained with a pink hairband. She wears a green minidress with pale green collar and hemline, adorned with a multicolored pattern of overlapping circles, as well as a pink scarf that is tightly wrapped on her neck similar to a choker, with the knot flowing on the back of her neck. She also wears pair of white high heel knee-high boots.

While going incognito in the Alien Residential Area, Yuna wears a black cloak that covers up most of her person, leaving only her lower face and legs visible.

When introduced, Yuna is shown to be cold, cruel, and ruthless. She holds disdain for the idea of helping others and is disrespectful towards Yudias Velgear during their Rush Duel to the point of refusing to give her name at the start of the Duel. Unlike the rest of the cast, she recognizes Yudias' unique Duel Disk, seeming to know the person who gave it to him.

Yuna has a violent temper, and is easily angered to the point of physical violence against the captive Fisher Sukai, though she restrains herself from attacking her Dueling opponent.

Yuna holds Rovian Kirishima in high regard, going after both Fisher Sukai and UTS for investigating her. This goes as far as complete adulation and admiration, with Yuna cheering wildly seeing Rovian prepare to Duel the Ohdo siblings. In addition, Yuna seems to despise those who attach surface-level judgement values to a situation, being greatly offended that UTS had assumed that the Rovian Bandits had kidnapped her, when in truth she willingly works with the group.

At some point prior to the start of the series, Yuna became the president of the Goha Company, but went missing in the Alien Residential Area. London Kirishima hired the members of UTS to find her there.[2][3]

Yuna appeared at night in the Alien Residential Area following Yuhi Ohdo's victory over Nomuratodamas in the Coruffium to suck up the collective Skyfish that make up Fisher Sukai with a vacuum cleaner.[4] After Manabu Sogetsu's Duel with Ranran Nanahoshi, Yuhi complained that they hadn't made any progress on Yuna's missing case. She then appeared holding Sukai hostage in a plastic bag and asked them what business they had with Rovian Kirishima.[5] Not knowing her true identity, Yudias Velgear challenged her to a Rush Duel in the hopes that she can reveal more about her own whereabouts. Though initially dismissive, she accepted the challenge upon seeing Yudias' Duel Disk, but only on the condition that she receive the Duel Disk and all of his, Yuhi, and Yuamu Ohdo's Duel Power if she won.[6]

During the Duel, Yuna revealed her identity, as well as the fact that she owned the card "Sevens Road Magician". Defeating Yudias, she took his Duel Disk and the wagered Duel Power before walking away, still holding Sukai hostage.[6]

Yuna uses a Spellcaster/Sevens Road Deck. Of particular note, she uses many cards that were known to be used by Yuga Ohdo in Yu-Gi-Oh! SEVENS, including his ace monster "Sevens Road Magician". Similarly to Yuga, Yuna's strategy revolves around sending monsters with different Attributes to her Graveyard to maximize the ATK "Sevens Road Magician" can gain with its effect. Yuna also uses the first Equip Spell Card seen in a Rush Duel anime, "Road Arms - Sevens Lance", which further powers up "Sevens Road Magician" even during the opponent's turn and prevents it from being destroyed by Trap effects.