Yuo Goha (ゴーハ・ユウオウ Gōha Yuuou) is a character in the Yu-Gi-Oh! SEVENS anime and the main antagonist of the Goha 6 Siblings arc. He is one of the Goha Siblings, and the one who set in motion the plan to challenge Yuga Ohdo and his friends to Duels by holding the Super Rush Robot hostage, though he also has his own goals behind the scenes. 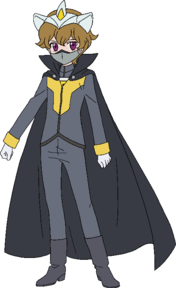 Full-body view of Yuo in his normal attire and suit.

Yuo is a short fair-skinned boy with violet eyes and curly sandy-brown hair resembling Trey's. Like all of the Goha Siblings, he conceals his mouth and nose behind a grey facemask, wears a unique tiara, and wears dark grey clothing with a colored trim on his cuffs, undershirt and torso, a charcoal cape with a high collar, white gloves, and his individual badge between his collar, which makes up a sixth of the logo of the Goha Corporation; Yuo's clothes have a yellow trim that covers his chest and torso in a "T" shape, his tiara is shaped in a similar manner to cat ears with a yellow shape at the center set in a spine, and his badge is the bottom right section of the Goha logo.

During his Duel with Yuga Ohdo, Yuo wears a performer's suit, retaining his mask and tiara. He wears a grey suit jacket, a white undershirt with a red string bowtie, a dark khaki waistcoat, charcoal shorts, and dark khaki boots. He pins his badge to his left coat lapel.

Yuo is arguably the most cold hearted of the Goha Siblings, coupled with sociopathic tendencies, having no qualms with removing his siblings from their positions once they lose a Duel, and in fact relishes on this, as he wants to monopolize Goha for himself. He is also fairly deceptive, scheming behind his siblings' back although not completely unnoticed by them.

Yuo has shown great cruelty and downright misanthropy, his love for puppets being such because he can manipulate and toy with them as he pleases, calling them his "super cute friends" because they do exactly as he wants them to, going as far as believing Yuga's group to be peasants who struggle in vain, just like his puppets.

While Dueling he likens himself to a troupe leader and his monsters as his "troupe members", frequently using performance terms like "show star" or "exiting the stage", and even showing moments of exaggerated excitement. Yuo is fairly sadistic, claiming Yuga was cute like a doll as he winced in pain when taking damage, and even taunted Yuga after defeating him, by constantly rubbing on his face the Fusion Summon he had employed while filling his arena with more and more dolls for a fairly terrifying sight, and having once attempted to scare Yuga's party by filling the school with puppets.

After the Goha Rush Duel Team Battle Royal, Yuo and his siblings returned to Earth due to space debris forcing them back home.[2][3]

When they arrived back at Earth, Yuo and his siblings learned of Rush Dueling, a Dueling format that had been installed in defiance of the Goha Corporation and whose program was contained within the Super Rush Robot on the moon. Yuo came up with a plan to destroy the robot by affixing Forced Gymnastics Armaments to it that would force it to continuously move, but in the interests of fairness the Goha Siblings would challenge the format's creator, Yuga Ohdo, and his friends to Rush Duels to give them a chance to deactivate the armaments.[3] In reality, Yuo plotted to have his siblings lose and give up their positions so that he would be the sole president of the Goha Corporation.[4]

Yuo and his siblings then returned to Goha City, introducing themselves to the citizens and ousting current presidential substitute Mimi Atachi. They challenged Yuga and his friends, warning Yuga that he would become a Goha employee if he lost and Yuro Dueled first, challenging Yuga to a Turbo Rush Duel. Despite a strong showing, Yuro was defeated by Yuga, and Yuo wasted little time in calling a presidential meeting and telling his older brother that failure was unacceptable for a president of Goha and suggesting he step down. Though this elicited outrage from Yujin and Yuka, Yuro nevertheless accepted responsibility for his loss and resigned. That evening Yuka confronted Yuo and asked what he was planning, suspicious of Yuo's motives despite Yuo claiming to only have the destruction of Rush Dueling and restoring the prestige of Goha in mind. Yuo retired to his room to meet with the President Drone, telling it that it was finally time as he examined a glowing card in a capsule.[3]

The following day the siblings prepared for the day, with Yujin training on a treadmill, determined to Duel next and avenge Yuro's loss. Yuo noted that the Rush Duel Club would have two points if Yujin lost, and Yuka sharply rebuked him, Yuo evasively claiming he only wanted Yujin to Duel with the resolve to quit as president if he lost. Yujin then ran so fast he destroyed the treadmill and ran out of the Super Mobile Fortress Sixross, ending up in the ocean. He returned the next day and went to Goha 7th Elementary to challenge Yuga to a Duel, now claiming to be a man of the sea and acting even more exuberantly than normal, much to Yuo, Yuka and Yuran's shock; Yuo suggested it might just be a phase. As Yuga couldn't swim in the artificial sea that Neiru Saionji had produced for Yujin, Luke instead took up Yujin's challenge and defeated him. Yujin agreed to resign as the final attack threw him into the sea, and Yuo accepted his brother's resignation. Proprietress wondered if Yuran would Duel next, but Yuka declared she would be up next.[5]

Yuka bought a baseball team, the Goha Astro Monsters, explaining to Yuo that every president should own a baseball team. She went to the tryouts where the Rush Duel Club were participating, Yuo explaining her decision to Yuran and Proprietress. Yuka challenged Romin Kirishima to a Rush Duel, but to Yuo's shock she was actually able to defeat Romin, putting the score at 2-1. Yuo confided in the President Drone that evening, and it told him the card he had been analyzing had been confirmed to be usable in Rush Duels, much to Yuo's joy.[6] That weekend, Gakuto Sogetsu was asked to substitute for his school's Kendo Club, so Yuran took the opportunity to defeat all the tournament participants in kendo and wait for the Rush Duel Club. As he and Yuka watched Yuran Duel Gakuto, Yuo commented that he hoped Yuran would be better than his useless brothers. Yuran was also able to win his Duel, putting the score at 2-2, but Yuo was no longer worried as long as he had his card.[7]

Intending to Duel next, Yuo recapped their progress with Yuka and Yuran, expressing surprise that Yuran won. Yuka accused him of sounding unhappy at his brother's victory, despite Yuo's claims he was super-happy Yuran had won. Yuo met with the President Drone afterwards, confident in his ability to gain sole control over the Goha Corporation as he added the card he'd been analyzing to his Deck. He placed his army of puppets within Goha 7th Elementary and used a remote-controlled puppet of Yuga to lure Luke away from him before descending from the Super Mobile Fortress Sixross to find Yuga, Yuro, Romin, Gakuto, Guruguru and Advisor M waiting for him. Yuo was disappointed that Yuro was there, as it minimized his chance to shock Yuga and his friends, and after Romin called his taste in friends poor taste, Yuo compared the group to his puppets. Yuga promptly challenged Yuo to a Duel, and Yuo had Neiru provide a circus tent for them to Duel in. Yuga started strong with three powerful Warrior monsters, and Yuo praised him for making a more exciting stage before beginning his own performance. He brought out "Daigyakutenno Megami" and used her effect to successfully destroy Yuga's two "Lydacross" monsters while weakening Yuga's remaining monster with "Imaginary Ark Tower", dealing significant damage in his first turn. On his next turn Yuga Maximum Summoned "Hyper Engine Vast Vulcan", and Yuo was entranced by the powerful Maximum Monster. He attempted to prevent Yuga from attacking with "Imaginary Ark Turret", but Yuga was able to destroy Yuo's Field Spell and weaken "Daigyakutenno Megami", then lower the ATK of "Vast Vulcan" enough to attack past "Imaginary Ark Turret" while substantially reducing Yuo's LP with effect damage. Before he could attack, the Forced Gymnastics Armaments finally dislodged the Super Rush Robot's right arm, which contained the data for Maximum Monsters, but the robot reattached the arm of its own accord, allowing "Vast Vulcan" to remain and attack, reducing Yuo to 500 LP. Despite his predicament, Yuo praised Yuga for dancing along to his tune and drew "Fusion" on his next turn, assembling the materials and Fusion Summoning "Metallion Asurastar". Using its effect to gain the ATK of the Warrior "Vast Vulcan", Yuo destroyed "Vast Vulcan" and defeated Yuga, taunting him with the name of the Summon.[4]

Yuo uses a LIGHT Deck that includes a wide array of monster Types and employs card effects to weaken non-LIGHT monsters and monsters of specific Types. After discovering the "Fusion" card that crashed into Goha Space Elementary and learning it could be used in Rush Dueling, Yuo incorporates it into his Deck. His Fusion Monsters are created by fusing the Machine "Imaginary Actor" with monsters of other Types to create Cyborg Fusion Monsters that include devastating anti-support effects for the non-Machine-Type they were fused from.