Yuran Goha (ゴーハ・ユウラン Gōha Yuuran) is a character in the Yu-Gi-Oh! SEVENS anime. He is described as the most mysterious and reserved member of the Goha Siblings. 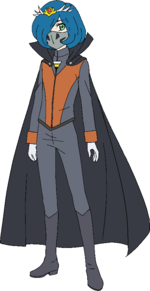 Full-body view of Yuran in his normal attire and his kendo gear.

Yuran is a fair-skinned boy with green eyes and blue hair in a wavy bob. Like all of the Goha Siblings, he conceals his mouth and nose behind a grey facemask, wears a unique tiara, and wears dark grey clothing with a colored trim on his cuffs, undershirt and torso, a charcoal cape with a high collar, white gloves, and his individual badge between his collar, which makes up a sixth of the logo of the Goha Corporation; Yuran's clothes have a brown trim that covers his chest and torso in a triangular shape, his tiara is composed of silver points and a gold "V" shape with an orange circle at the center, his mask has small black triangles marked on it, and his badge is the bottom left section of the Goha logo.

While practicing kendo, Yuran wears traditional martial arts clothes; a white keiko-gi that he pins his badge to over his heart and a dark blue hakama. He leaves his feet bare and also carries a wooden kendo training sword. His eyes become sharper when he becomes more focused.

Yuran appears to be the most mysterious and reserved member of the Goha Siblings. He maintains a calm, stoic and serious demeanor and rarely speaks.

After the Goha Rush Duel Team Battle Royal, Yuran and his siblings returned to Earth.[2]

Yuka uses an EARTH Warrior Deck themed around Kendo. It uses Normal Monsters with high DEF values, and his strategy is based around using defensive tactics to counter and turn an opponent's offense against them and inflict burn damage.