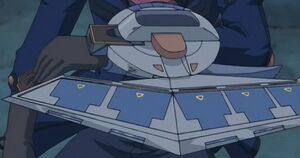 When connected to his Duel Runner, Yusei Go, it attaches just below the dashboard. When in use, it will fold together as it normally would. When inactive, the two parts of the blade separate and fold vertically on each side of the Duel Runner. Like the KC model, Yusei's Duel Disk for ground mode can fold when not in use.

Like most other hybrid Duel Disks, the Deck Zone is on his wrist dealer and not in the Duel Disk itself.

Yusei also has a two-way microphone that he installed in his disk.[1] 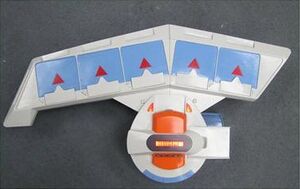 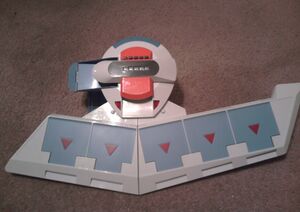 In November 2010, Konami released an update to this Duel Disk, the Duel Disk -Yusei Version- DX2010 for ¥5985.[2] This version addresses many of the issues present in the 2009 version and the Mattel versions. The Deck Zone can comfortably hold 40 sleeved cards, and the Graveyard can hold up to 30 sleeved cards. It is also the first Duel Disk with spaces for the Removed from Play and Extra Deck Zones, this is also the first Duel Disk to feature a bottom covering on the arm blade. Konami removed the "flip action" feature present in the 2009 version, opting instead for a more realistic portrayal of the Duel Disk featured in the show - the clips that hold the cards on the blade are similar to those on the original Mattel disks.