Yusei Fudo is the name of a Yusei Fudo double, of unexplained origin, appearing in Yu-Gi-Oh! 5D's Tag Force 6.

He appears as the Tag Partner for Z-one in the third event of Yusei's storyline. 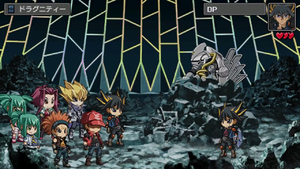 The Yusei double appears before the player and the Signers.

The Yusei double uses the same Deck the real Yusei uses. If the player is able to edit Yusei's Deck, the double will use the edited Deck as well.