Yusei Fudo uses this Duel Runner to replace his old one. It is red in color. It is a hybrid built mainly from refurbished scrap metal of older runners, which was recollected by Rally and the others. It includes a Duel Disk in the design of a Battle City Duel Disk, also apparently scavenged from the endless junkyard wastes of the ruined Satellite region. The Disk along with most of the runner's parts, including the latest top of the line marketed KaibaCorp acceleration chip: the Skyline 30 which was stolen from a factory by Rally.

During his first Duel against Kalin Kessler, the Yusei Go sustained extreme damage, and broke down in the middle of the Duel, injuring Yusei (luckily, this happened as Kalin was literally about to win). Fortunately, the chassis was intact, so Nervin, Tank, Blitz, and Rally Dawson were able to retrieve the Duel Runner and return it to Martha's orphanage, where it was restored.

When Yusei was repairing Team Taiyo's Duel Runner, he commented that he used many of the techniques they used to replace parts unavailable to him to build the Yusei Go, such as using a Soda can as a substitute for a regulator, or a hanger as a hook. He also used many parts from broken toys and cars to build it.[2]

In the apocalyptic future, Z-one built a replica, although there are a few differences.[3] Aspects of this Duel Runner were later incorporated into Z-one's armor[4]. 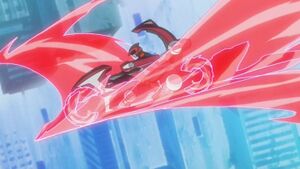 Yusei Go flying in the Duel with Z-one.

The Duel Runner contains an extra compartment which Yusei uses to keep the helmet(s) since there was two.[5]

Yusei Go was modified by Yusei and Bruno with their new engine program in order to compete in the World Racing Grand Prix. Yusei believes this upgrade will also help him achieve Accel Synchro.

For the WRGP, the Duel Runner contains Team 5D's logo.

During the Machine Emperors invasion, Z-one's version of the Yusei Go had a laser attached to its right side. Z-one used this to destroy a "Machine Emperor Grannel Infinity" that was about to attack Antinomy.[6]

Before Yusei was going to Duel against Z-one, Aporia infuses his Duel Disk into the Yusei Go giving it wings and the ability to temporarily fly for the Duel.[7]

The Duel Runner was severely damaged during Yusei's first Duel with Kalin and was nearly destroyed. After that episode, it is shown to be incredibly resilient, falling down through a canyon after an explosion during the Duel with Lawton without having any damage afterwards, jumping incredibly large distances safely in the last episode, ect. 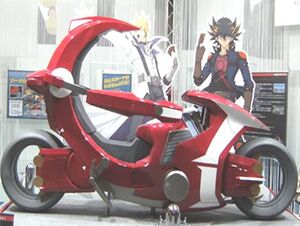 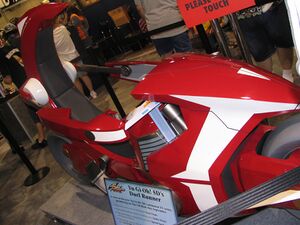 In Japan, Yusei Go was used in the commercials for The Duelist Genesis and Starstrike Blast. 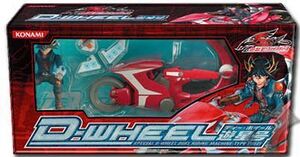 Toys have been made of Yusei Go. The Japanese version includes a Yusei figure in a sitting position and a clip-on Duel Disk. The English version of the toy can fire a projectile and comes with a more posable Yusei figure.