Yusuke Fujiwara is a new Obelisk Blue student at Duel Academy in season four of Yu-Gi-Oh! GX. At his first appearance, he was in fact Honest, disguised as his master, disappeared long ago. However, the true identity of the mastermind behind Trueman is later discovered to be Fujiwara, under the influence of Nightshroud. 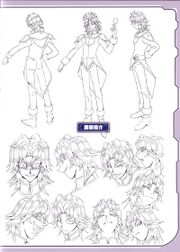 During his first initial years at Duel Academy, Yusuke often got saddened at having bonds with friends due to the sudden deaths of his parents at a young age. He eventually got paranoid and believed that his friends will forget him eventually like his parents. He thus became obsessed with forgetting about friends and bonds before the people he bonded with forget him first, so that he would no longer feel the pain he continuously feels. Despite his doubts he was noted to be an expert Duelist as Atticus stated he was far more talented as a student than even himself or Zane.

Under the influence of Nightshroud, Yusuke became more calm and collected and enjoyed taunting his opponents on their beliefs in the bonds and hope they use and create, believing that is what makes them weak. He continuously held onto the belief that forgetting bonds and hope will remove people's suffering and would often proudly declare this. Though Yusuke believed he completely had the power of Nightshroud under his command, he was simply another vessel for the malicious entity similar to Atticus.

After finally being purged of Nightshroud, Yusuke changed his belief on friends and bonds and believed that as long as he believes in himself and his cards, he will never feel bond-related pains again.

When Yusuke was just a young boy, his parents died suddenly, causing his spirit partner, Honest, to appear and promise him to protect him forever. Later, he enrolled at Duel Academy and made several friends, particularly Atticus Rhodes and Zane Truesdale, who also lived the presently abandoned dormitory. Later, he became paranoid and began to have the idea that his friends would forget him, as he thought his parents had. It drove him to the point that he decided that he would be the one to forget them, so he wouldn't feel the pain of being forgotten.

He studied about rituals to try to make this possible, but he put "Honest" away to protect him. By using dark rituals, he attempted to give himself power and the ability to forget those he loved. Atticus witnessed the final portion of the ritual, just as Yusuke left him the mask card, no longer needing it himself. Fujiwara ended up in the World of Darkness, while Atticus eventually became possessed by Nightshroud, the entity that Fujiwara attempted to summon, via the mask. 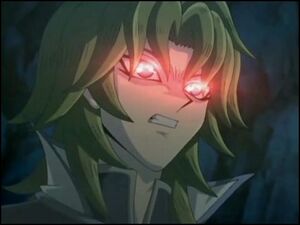 Yusuke himself hasn't appeared to the rest of the characters, instead a Duel Spirit named Honest appears looking exactly like him, but is initially believed by everyone to be Yusuke. He is being targeted by an evil entity named Trueman. He arrives at Duel Academy in an attempt to find out information on Fujiwara's disappearance, and uses his powers to trick people into believing that they've known him for years. He also seems keen on preventing anyone from finding out anything about him, as he attempts to hypnotize Jaden Yuki to make him think that they were long time friends (not caring that Jaden had just saved him), which doesn't work because of the power Jaden gained from Yubel, and he retreats when Jaden tries ask him who he is. Following this encounter, Jaden asks Axel Brodie to gather all available information on Yusuke (not aware that this Yusuke wasn't the real one). Through this, he is able to confirm that no student by the name of Yusuke Fujiwara is currently enrolled in Duel Academy - Yusuke's name is instead listed among the Abandoned Dorm's missing students. He later reappears in the Abandoned Dorm's duel arena, and Jaden identifies what everyone thought was Yusuke as the Duel Spirit Honest. He is later destroyed by Trueman when he sacrifices himself to help Jaden, but Jaden adds him to his Deck and uses him in his rematch against Trueman.

While in disguise as Yusuke, Honest possessed a variety of supernatural powers ranging from teleportation, starting fires with his mind, sensing darkness, and projecting shock waves. He also has the power to hypnotize people, and by extension, make people forget about him. Those with significant power can easily resist, like Jaden infused with Yubel's power. 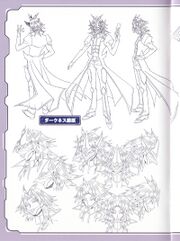 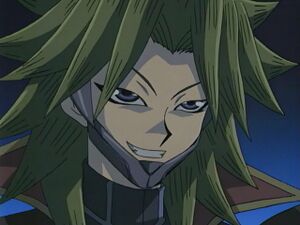 Although many assumed he was dead after the events in the Abandoned Dorm, Yusuke is later revealed to be alive and affiliated with the real Nightshroud—the mastermind behind Trueman's siege on Domino City and Duel Academy. He is challenged by Atticus to a Duel after virtually everyone at Duel Academy is defeated. Atticus loses and is absorbed into the World of Darkness. Afterwards, Yusuke Duels against Jaden and Jesse Anderson in a Battle Royal.

During the Duel, he tried to make them turn on each other after he believes that Jesse's darkness is defeating Jaden; however he was surprised to discover that they actually wanted to Duel each other, but only in order to defeat him. He was enraged by their friendship, claiming it was worthless. Honest then appeared, trying to make Yusuke remember the past when he had friends. He denied ever remembering them, not even remembering Honest. He eventually defeats Jesse and declares that Jesse's loss was because of his bonds. Jaden however believes that he is wrong and that despite Yusuke's declarations, he still wants to return to Honest deep down. When Jaden attempts to prove so by summoning "Rainbow Neos", Yusuke deems it hopeless and for naught since the effect of "Clear Vicious Knight" gains the original ATK of "Rainbow Neos".

Jaden then discovers that Yusuke was just another pawn for Nightshroud, contrary to Yusuke claiming he is controlling Nightshroud's power from the beginning. When Nightshroud's power over Yusuke weakens after Jaden tells him that Yusuke's desire to return to Honest is overriding his control, Jaden uses the effects of "Honest" to allow the spirit to exorcise Nightshroud from Yusuke's body and subsequently win the Duel. Yusuke is later revived after Jaden defeats the real Nightshroud. During the Academy's graduation ceremony, he apologized to Atticus and everyone else about what he had done as Nightshroud. Atticus then explains that his friends would never forget him and that they forgive him. Yusuke then smiles and thanks everyone for their support. 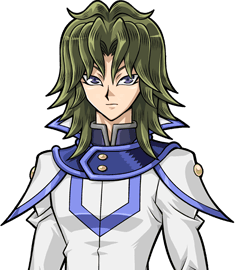 Yusuke, in the Tag Force series

Yusuke appears in the Tag Force series as an opponent and possible partner.

While under Nightshroud's control, Fujiwara plays a "Clear" Deck, which focuses on the use of his Field Spell Card "Clear World" to cripple his opponent's monsters while his own monsters, immune to its effects (since they have no Attribute while on the field), overwhelm the opposition with a combination of special effects and brute force. This Deck itself is a reflection of Nightshroud's beliefs: individuality brings suffering, while nihilism relieves it. He is a very powerful duelist, as Atticus stated that Fujiwara was stronger than both Zane and himself.

"Honest" was shown to be in his Deck prior to his involvement with Nightshroud but he removed it in order to protect the Duel Spirit.[1]