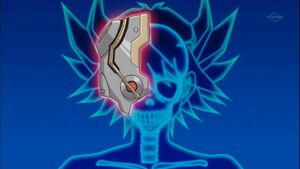 Z-one's head device is a brain–computer interface that Z-one created to help him behave like Yusei Fudo.[1] 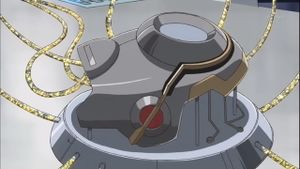 The device being constructed.

Z-one tried to change himself into Yusei Fudo in an attempt to lead humanity back to path of righteousness and consequentially save it from the Meklord Emperors. Z-one researched Yusei's history and personality and programed the device as he did so. He used machines to surgically attach the device to his head over his right eye. The tinted visor on his helmet prevented this portion of his face from being visible.[1]

Z-one successfully managed to lead people as Yusei Fudo for a while. However after some Meklord Emperors began to self-destruct, Z-one was blown back by an explosion, which damaged his head device in the process. After that Z-one gave up on his plans of saving humanity by getting them to behave righteously and began to search for another solution, eventually deciding to destroy New Domino City in the past before the Ener-D catastrophe happened.[1] After he was defeated by Yusei, who then tried to help him, Z-one said it was no use, as the device had been prolonging his life and was about to shut down.[2]