The player meets Zane one night at the Lighthouse, interrupting a conversation between him and Alexis.

Zane does not duel the player until after the Shadow Riders are defeated, choosing the player as his opponent for his Graduation Duel.

After Zane faces and loses to Aster Phoenix in the professional dueling circuit, he falls into a losing streak. He eventually resurfaces as Dark Zane (ヘルカイザー亮, Herukaizā Ryō), and the player faces him in a Shadow Game at the Volcano one day after their second duel against Nightshroud. 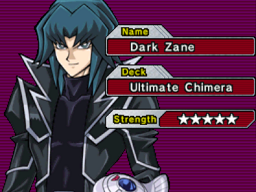 After finishing the game, the player can duel against Dark Zane in Shadow Games at the Forest during sunset, and by the entrance to the Academy at night.

Dark Zane can give his old Obelisk Blue uniform to the player if he is defeated multiple times.