The Zero Reverse was a disastrous event caused by an intentional overload to the Ener-D system, which was incomplete and unstable at the time. The result of this led to negative energy which was sent down into the Earth in the form of a massive amount of dark energy. The first Ener-D system developed 17 years prior of Yu-Gi-Oh! 5D's had this occurrence and resulted in a disastrous tectonic shift that split Domino City into two. Thus a channel into the Underworld where the Earthbound Immortals were sealed was opened as well, which allowed them to spread their influence over those who were chosen by the Gods themselves.

It was later revealed to be, however, a plot set by Iliaster in their ambition to destroy all traces of Ener-D, citing it as a mistake on human evolution that had destroyed their future, and the awakening of the "Earthbound Immortals" was an unintended side effect.

In the future that Z-one, Aporia, Antinomy and Paradox came from, a similar disaster occurred with a more advanced Ener-D reactor, only this time, it was on a much larger scale, and destroyed most or all of the entire world. 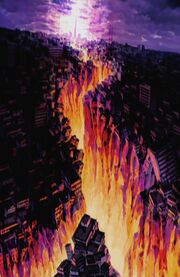 The Zero Reverse effect caused the separation of Domino City

It was revealed that the lead developers within the Kaiba Corperation R.R.D. were Yusei Fudo's parents and that they had both lost their lives during the catastrophic incident. The leader of the Dark Signers, Roman Goodwin was involved in the project, along with his brother Rex Goodwin, and they were both assistants at that time. Later on, Roman told Yusei and the others that at first the research of the Ener-D was going smoothly, but soon unusual weather conditions and small tremors began occurring whenever the system was tested. Fearing the possibility of a disaster occurring if the Ener-D is completed, Professor Fudo (Yusei's father), wanted to cancel the Ener-D research, as at the time the system itself was quite unstable. Furthermore, he came to the conclusion that there might be an accident, however his request to cancel the project was completely rejected by its sponsor.

The aerial view of the separation of New Domino

With the professor being uncooperative, the research ended up being handed over Roman as the new head developer. This all ultimately led to the occurrence of the incident, as Roman himself 17 years ago, was one of the chosen Signers. Unfortunately, he had decided to take the path of darkness, and so he instead chose to become a Dark Signer. In order to be reborn as one, Roman killed himself by overloading the system which ultimately led to the disaster.

The overloaded Ener-D reactor exploded and caused a massive tectonic shift which caused a chunk of Domino City to separate from the rest of the landmass, creating an island later known as Satellite, that island being the area hit hardest by the energy release. In the aftermath of the disaster, Domino City was separated into New Domino City and Satellite, and the old Ener-D reactor was left buried deep within Satellite.

The public was told that the events were caused solely by a natural disaster (this being the cover up story). One of the leaders of the R.R.D. (most likely Rex Goodwin), had survived the accident, took over the Sector Security, created the massive cover-up story, and took all possible measures to ensure that no one would accidentally see through it and learn what really had happened.