Zo Ikitenai ( Ikitenai Zō) is a character in the Yu-Gi-Oh! SEVENS anime. He is a student at Goha 4th Elementary and the President of the Zombie Duel Club. 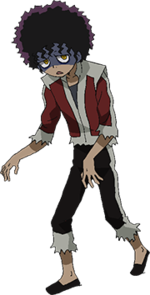 Zo's appearance and dress are inspired by the outfit worn by Michael Jackson in the music video for Thriller, which featured zombie dancers. He is sallow-skinned and has a shadowed face with eerie orange eyes and a scraggy black afro. Zo wears ragged clothes; a maroon jacket with a tattered dirty white trim, a blue undershirt, and black pants with the same tattered dirty white trim as his jacket that end above the ankles, in addition to black shoes without visible socks. After dropping his act, Zo is seen with lighter skin and more normal expressions.

Zo's name when read in Japanese translates to "I'm not alive".

Zo and the Zombie Duel Club were hired by Goha Enterprises for a Zombie Party Recreation Time event, and Yuga Ohdo took a course with them on zombie acting. As the event reached its end, the "horde" cornered one of the last survivors, Gavin Sogetsu, on the Goha Enterprises Main Office helipad and as per the orders of Yuga as the "zombie king", Zo challenged Gavin to a Rush Duel. He came close to defeating Gavin by swarming the field with Zombie monsters, but to his shock Gavin Fusion Summoned "Yamiterasu the Divine Delayer" and changed all of Zo's monsters to Defense Position, then switched them back with "Be Silent" to reduce the ATK of "Cyber-Stein Shrine" and defeat Zo. After the Duel Yuga explained who Zo was to Gavin and Zo politely introduced himself, learning that Gavin had genuinely believed him and the others to be zombies due to not being aware of the event.[1]

Zo uses a Zombie Deck, focused on swarming the field with Normal Monsters and boosting their ATK values using Spell Cards. Thematically, his monsters are based on Zombies in attire from different festivals, such as Carnival, Samba or Obon.