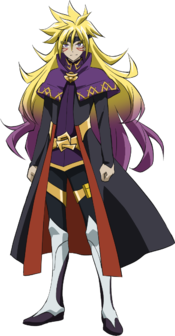 Zuwijo is a tall young man with sallow skin, purple eyes with red claw-shaped markings under them, and long wild blonde hair that fades into purple past his waist. He wears similar clothes to his subordinate Yudias, but in darker colors; a purple tunic with a high collar and a golden trim, black leggings with gold bands strapped around his thighs, including one that appears to contain a Deck box, a black trench coat with a red lining and gold bands around the waist under a purple mantle clasped by a gold bangle, a golden belt with a clasp that resembles enclosed claws, and knee-high dark purple boots covered in angular silver armor.

In the past, Zuwijo demonstrated great valor and honor, imparting wisdom to Yudias Velgear on the notion of the battlefield and one's comrades.

However, in the present, Zuwijo is far colder, claiming to have always been disgusted by Yudias's desire to end the war peacefully. Zuwijo himself desires to use Rush Duels to win the war.

During a battle, Zuwijo's Gavil Charger was of little use and he asked his subordinate Yudias Velgear to go on ahead, entrusting victory to him. However as soon as Yudias charged out, an energy blast struck the staircase where Zuwijo had been standing, resulting in Yudias thinking him dead.[4]

Zuwijo survived the attack through unknown circumstances, making his way to Earth.[5] He developed an interest in Rush Dueling, believing it could be used to win the war.[3]

Zuwijo learned that Yudias had also come to Earth, so he ordered Chupataro Kaburagi to make contact with him. Chupataro successfully did so and reported his progress to Zuwijo over the phone.[5] With Chupataro's first mission accomplished, Zuwijo ordered Chupataro to seek the Earthdamar through Yudias, though Chupataro was unsuccessful and was arrested by MIK.[6] Zuwijo was instead able to find the Earthdamar himself after Yuhi Ohdo defeated Tell Kawai in a Rush Duel, using a capsule to steal it before Yuhi could drink it again. Yudias was present and shocked to see Zuwijo was alive, but Zuwijo left without even speaking to his former subordinate, despite Yudias' protests.[7]

Desiring to test Yudias' Rush Dueling aptitude and have him rejoin his cause, Zuwijo sent Mitsuko Hiramori to test him in a Rush Duel designed to evoke memories of experiences that Zuwijo and Yudias had shared. Yudias was able to triumph over Mitsuko and deduced that Zuwijo was present in the warehouse; Zuwijo revealed himself and his intentions, but to his disgust Yudias insisted he wanted to end the war peacefully and Zuwijo claimed to have always disliked that trait. MIK agents led by Manabu Sogetsu then arrived to arrest Zuwijo and Mitsuko, but Zuwijo easily broke through the warehouse wall and escaped.[3]