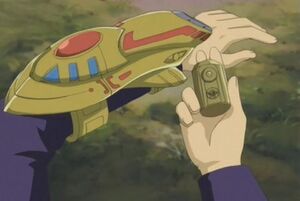 The Capsule Shooter is a device seen only in Yu-Gi-Oh! Capsule Monsters.

When someone enters the world of the Capsule Monsters, they are given a Shooter (which can't come off) and a silver belt to store their unused capsules. In order to open the Shooter to load a capsule, the user must say "Loading Capsule." The back portion will then open, revealing three slots where capsules go. When the compartment closes, the user must say either "Fire capsule", or just "Fire". Then they announce which creature they're summoning, and it appears. Whenever a user gets a new monster, they go into the front of the Shooter (as a green spirit), the back compartment opens and the new monster comes out as a capsule. (Note: This process did not happen with Red-Eyes B. Dragon; instead, it changed into a gold spirit and "shrunk" into capsule form and the floated over to Joey's hand.) It is then stored in a slot on the Duelist's capsule belt.

When Yugi combines a monster with his Armor, his Shooter's style may alter to fit the armor style of the monster. The only monster he combined with that didn't alter his Shooter was Dark Magician.