The series stars Yudias Velgear as the main protagonist. Like its predecessor, Yu-Gi-Oh! SEVENS, GO RUSH!! focuses on Rush Duels. The series also introduces a new Type of monster, the Galaxy Type.[2] 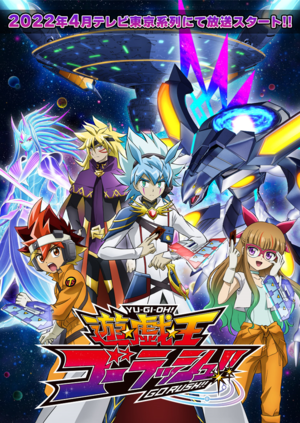 Yuhi Ohdo and Yuamu Ohdo are elementary schooler twins living in Mutsuba Town who are in charge of the alien extermination company UTS (Ultraterrestrial Trouble Solutions). They spend their days working really hard searching for aliens using a mysterious device created by Yuhi... that is, until one fateful day!!

Right after they created a mystery school club, they finally found a real spaceship and inside of it, they made contact with Yudias, an alien from the distant Velgear Star Cluster.

Yudias has come to Earth, after he and his comrades were chased from his native star cluster, seeking a way to a new future, which "Rush Duel" seems like it might offer a means to do so, but knows nothing about it. Yuhi challenges the newbie Yudias to a Rush Duel in order to give him a helping hand. This is first contact between elementary school students and aliens, via Rush Duel![4]

Now it's time to enter the new stage of Rush Duel introduced by this alien soldier from the far ends of the galaxy!

Bridge once again return as the main animation studio after taking over for Studio Gallop beginning with Yu-Gi-Oh! SEVENS. Masahiro Hikokubo is again composing the series' Duels. The characters are designed by Kazuko Tadano and Hiromi Matsushita.

It was decided to focus the series on aliens, as director Nobuhiro Kondo and the staff wanted to ensure their second show was accessible to people who hadn't heard of Yu-Gi-Oh! or Rush Dueling, but didn't want to simply repeat the plot of Yu-Gi-Oh! SEVENS, so they decided to make the protagonist an alien as they felt someone not from Earth would be the best choice for someone who didn't know about Rush Dueling. While there were concerns about aliens getting mixed up with Monster Cards, Kondo felt characters like Trapigeon Kayama proved audiences could differentiate between the two; Yudias was initially planned to be more "alien", but it was decided to make him more human to make Duels more easily understood. Conseuqnetly GO RUSH!! is intended as an easy entrance show for people who want to get into Rush Duels, so the early Featured Duels clearly explain "Summons" and "activating a Spell Card" for the purposes of fans who never could quite grasp what was going on in previous shows. Despite this initial basic approach, Kondo stated his intentions to ensure that the Duels will be bizarre and showcase a variety of cards, given the alien nature of many Duelists in the show.[5]

The COVID-19 pandemic and the restrictions surrounding it made casting for GO RUSH!! difficult, as the staff were unable to hold mass auditions. Arthur Lounsberry (Yudias Velgear), Toshiki Kumagai (Yuhi Ohdo), and Koko Fukushima (Yuamu Ohdo) protray their characters as a team; Kondo liked the idea of younger actors Kumagi and Fukushima growing into their roles and hoped the series would serve as an entry point for careers in anime.[5]