Yu-Gi-Oh!, known in Japan and the rest of Asia as Yu-Gi-Oh! Duel Monsters (遊☆戯☆王デュエルモンスターズ, Yūgiō Dyueru Monsutāzu) is an anime based on the Yu-Gi-Oh! manga. It is produced by Studio Gallop and Nihon Ad Systems, and the English adaptation is distributed by 4Kids Entertainment.

Duel Monsters is not to be confused with the earlier series of the same name. As the series is the second to be based on the manga, it is often referred to by fans as the "second series". Some sources state erroneously that the first series produced by Toei Animation is a "lost first season", although the two series are unrelated aside from plot continuity.

The success of Duel Monsters was one of the main factors in creating a real-world version of the game that served as the focal point of the series, the Yu-Gi-Oh! Trading Card Game.

The plot of the series is divided into several story arcs:

Duel Monsters serves as a continuation of the earlier series in terms of the story, yet there are differences in the two series where they overlap. In particular, the Death-T fight which is held by Yugi and rival Seto Kaiba, is redone, and Miho Nosaka, a main character and good friend of Yugi Muto, Joey Wheeler, Tristan Taylor, Tea Gardner, and Ryou Bakura in the earlier series, does not appear in Duel Monsters. Whereas the earlier series introduces the characters (by virtue of being adapted from earlier volumes of the manga), Duel Monsters assumes that the viewers are familiar with the characters from the onset, and scenes referring to chronologically earlier events are redone. Because of the relative speed between the manga and anime releases, three extra (non-canon or filler) story arcs that are not found in later volumes have been added for Duel Monsters: Virtual World, Waking the Dragons, and Grand Championship. One of the other most notable changes is that, unlike the manga, the Duel Monsters anime, as the title suggests, focuses on the Duel Monsters card-game more than the manga, and adds many Duel scenes that were not in the original manga itself, often changing parts of the plot to fit around addition of the duels.

As the two series are based on the same manga (albeit different parts therein), and the fact that only Duel Monsters was adapted into English, there has been some controversy regarding Yu-Gi-Oh! as a whole. Some have regarded that the fact that the earlier series was not adapted into English creates a large plothole in Duel Monsters, as they believe that the earlier series provides the necessary support and development of the series' main characters. Those opposing this view note the various clear differences between the plot and artwork style would also confuse viewers.

The English adaptation is also widely criticized for the way it is adapted. The changes that were made were frequently done to make the series more understandable and to remove material which may be considered inappropriate or too mature for its English-language demographic, considered to be younger than its original. In addition more of the background is explained in the English version than in the Japanese version; the Japanese version assumes that the viewer has read the manga series.

There are two adaptations of the series in English: a United States adaptation by 4Kids Entertainment aired in the U.S., Canada, Europe, Australia, and New Zealand, and a Southeast Asia version by A.S.N. for Singapore and the Philippines.

The changes made in the English-language versions of the anime include: 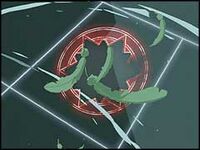 The edited version of Yu-Gi-Oh!. 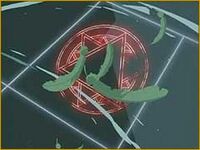 The unedited version containing a hexagram (used in religions such as Judaism and in occultism).

As a response to these critics, a separate "uncut" DVD release was commissioned between 4Kids Entertainment and FUNimation, with a new adaptation that is more consistent with the original. The uncut DVDs were pulled from solicitation after Volume 3 "Stolen - Blue-Eyes White Dragon" for no apparent reason, with a variety of explanations coming from, upon cross-examination, invalid sources with little elaboration. Lance Heiskell, a FUNimation representative, has noted legal rights as the reason for cancellation, although he was unable to expand on it. This appears to be the most likely possibility, given the DVDs' reportedly successful run.

As of recent, 4Kids had been uploading the original Japanese episodes, albeit unsubbed, to their YouTube channel, alongside the first Japanese opening and closing. The first 37 episodes had been uploaded; the first three have been subbed. If 4Kids will continue uploading the original episodes or if they have any plans to subtitle them is unknown. Whilst the episodes are encoded to the US region, Youtubers outside the US could view them if they set their region to 'Worldwide'.

With a legal issue brought about by failing to renew Shunsuke Kazama's (Yugi Muto's Japanese voice) contract for rights to his work, 4Kids has removed its Japanese episodes from YouTube, at least until a resolution is made with Mr. Kazama.

A series of uncut DVDs were made by 4kids Entertainment and FUNimation. This adaptation stuck closer to the original Japanese in dialogue and events. Text is not removed, and as such Japanese cards from the original version are used. Some original names such as Sugoroku Mutou are kept. Some characters names are a mixture of their original and English anime names, such as Joey Katsuya and Téa Mazaki. Also, some characters have different voice actors or actresses (e.g. Mai is voiced by Kathleen Delaney rather than Megan Hollingshead or Bella Hudson.

Duel Monsters is heavily centered around the card game, with plot details frequently added between game turns. However, there are several main differences between the rules found therein and the rules of the real-world card game:

As of Saturday, September 4, 2010, the original Yu-Gi-Oh! has been airing reruns of the Battle City arc. This time however, this part of the series has been repackaged as Yu-Gi-Oh! Rulers of the Duel.

20th Remaster (２０ｔｈ 20th －Rimasutā－) is a remastered re-broadcast of the Duelist Kingdom arc. On June 17, 2014, 4K Media announces a new Yu-Gi-Oh! Movie currently in development in Japan[1]. Year later, a film teaser for the movie announces that Yu-Gi-Oh! Duel Monsters will be remastered and shown on TV Tokyo, starting on February 7, 2015 at 7:30 a.m..[2] 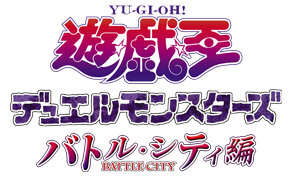 Battle City Edition (バトル・シティ編 Batoru Shiti-hen) is a remastered re-broadcast of the Battle City arc. In the April issue of Shueisha's V Jump magazine announced TV Tokyo will begin airing remastered episodes of the Battle City arc in April, alongside the remaster episodes of the Duelist Kingdom arc.[3] It first appeared on premiere April 7, 2015 with the first episode being Special Edition Road to Battle City instead of episode 50 The Mystery Duelist, Part 1. This special contains a recap of the Duelist Kingdom and the events leading up to Battle City narrated by Seto Kaiba. The next episode is episode 2 The Past is Present.