From Yugipedia
Jump to: navigation, search
This article is about the game. For the arc, see Domino City Battles. 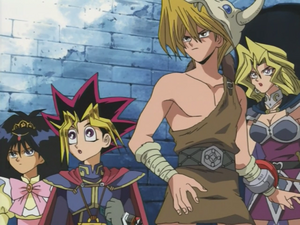 Legendary Heroes, known as Duel Monsters Quest (クエスト Dyueru Monsutāzu Kuesuto) in Japanese, is a virtual-reality game in the Yu-Gi-Oh! anime. It is one of the three sub-stories in the Domino City Battles story arc. In appears in episodes 43 to 45.

Seto Kaiba plans to fire The Big Five after finding out about their scheme to take over KaibaCorp during the Duelist Kingdom story arc. The Big Five challenge him to a virtual game, and if he wins, they will resign their posts. Unfortunately, inside the game Kaiba's "Blue-Eyes White Dragon" was captured by a "Dragon Capture Jar". Kaiba himself is then captured by the "Witty Phantom", who wishes to sacrifice him to the "Mythic Dragon".

Mokuba Kaiba runs to Yugi Muto for help. Yugi, Téa Gardner, Joey Wheeler, and Tristan Taylor all head to KaibaCorp. Yugi, Joey, and Mokuba get into the virtual pods, which transfer them to the virtual world. On the way, Joey is forced to Duel with Mai Valentine. When she finds out her opponent is Joey (they were both masked), she joins in the search for Kaiba.

On the way they encounter a maze. Joey hears a girl crying and attempts to rescue her. (Mai disgustedly observes that Joey is too easily attracted to maidens in distress.) Joey finds Princess Adena who strongly resembles Mokuba. Adena says she is about to be sacrificed to the Mythic Dragon.

The four become guests to a royal feast. Adena explains everything about the "Mythic Dragon". When they are ready to go vanquish the dragon, Adena is suddenly seemingly captured, but it was actually Mokuba in disguise. The remaining three heroes give chase, destroying many obstacles in their way. Finally, they reach the Kaiba brothers. But then, the Big Five cheat by re-writing the program and Summon the "Mythic Dragon" themselves. After many sacrifices leaving only Yugi and Kaiba standing, they finally vanquish the dragon, by fusing Kaiba's "Blue-Eyes Ultimate Dragon" and Yugi's "Black Luster Soldier" into the "Dragon Master Knight". After the Big Five's defeat, Adena reveals herself to be "Mystical Elf" and resurrects the sacrificed Joey, Mai and Mokuba. The group leave the virtual world once their task is complete.

The following monsters appeared as enemies in the desert area:

The following monsters appeared as enemies in the graveyard zone:

The following monsters appeared as enemies in the labyrinth:

The following monsters appeared as enemies in the forest area: