Witty Phantom, known as Demon Death-Satan in the Japanese and Korean versions, is a character based on the card "Witty Phantom".

He appeared in Yu-Gi-Oh!, as a character in KaibaCorp's Legendary Heroes game. In the game he was based on Maximillion Pegasus as he has his personality.

He also appeared in Yu-Gi-Oh! GX as a Duel Monster Spirit.

Witty Phantom held Seto Kaiba captive at the Castle of Dark Illusions after he had been captured by an "Armed Ninja". Apparently, he was the only character in the game who realized that it was indeed a game. Kaiba orders the phantom to release him, which he refuses. He tells Kaiba that he is to be offered to Summon the Mythic Dragon and that another sacrifice is on the way.[2]

After Kaiba falls asleep, Witty Phantom wakes him up, having been programmed to torment him, and not let him sleep. He shows Kaiba, Mokuba, unconscious and disguised as Adena. However Mokuba removes his disguise and Summons "Swordstalker", who cuts Kaiba free. Kaiba Summons a "Blue-Eyes White Dragon", which attacks and kills Witty Phantom.[3] 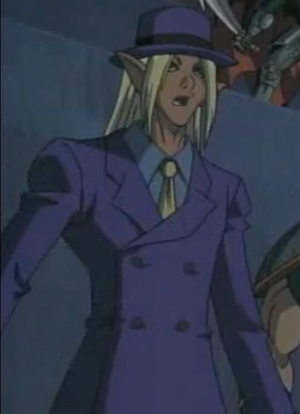 Witty Phantom appeared in the Duel Monsters Spirit World. He cheered for Brron, Mad King of Dark World, when he was Dueling Jaden Yuki.