From Yugipedia
Jump to: navigation, search
For other version of this character, see Tyranno Hassleberry (disambiguation).

Tyranno Hassleberry, known as Tyranno Kenzan (ティラノ剣山, Tirano Kenzan) in the Japanese version, is a Ra Yellow Duelist who enters Duel Academy in Jaden Yuki's second year. To his surprise, he was assigned to the Ra Yellow dorm despite scoring high on the Duel Academy entry exam due to the fact that he did not attend an associated preparatory school. Hassleberry befriends Jaden after meeting him, and becomes one of his most loyal friends. In both versions, people tend to call him only by his last name. 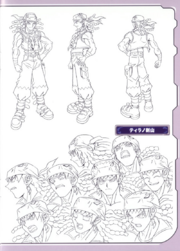 Tyranno's design incorporates multiple layers of clothing and a wide range of expressions. Depicted here is the Duelist in full Ra Yellow regalia from front, side, and rear alongside views of his head from different angles.

Hassleberry has a very muscular physique and his outfit follows a dinosaur and military theme. His usual outfit consists of a slightly darker Ra Yellow uniform, with the sleeves torn off and a green muscle shirt underneath. He is displayed to be African American or mixed race. He also wears beige combat pants, white wristbands with matching bands just above his feet, a bandanna featuring a dinosaur face, bone earrings, and a necklace of dinosaur bones. His hair consists of long, black dreadlocks. Sometimes his pupils are narrowed into reptile-like slits and the color of his eyes lighten to make his eyes look more like a dinosaur's. He carries an Academy-issued Duel Disk on his left hand. In flashbacks, he is seen wearing a Jurassic Park T-shirt.

Hassleberry is introduced as an arrogant bully, but after his defeat against Jaden he becomes nicer and more social. He can be somewhat insensitive and hypocritical, and is shown to be possessive of his relationship with Jaden. However when the situation demands it, Hassleberry is the first to set aside differences and work as a team, in comparison to Syrus. Hassleberry values loyalty immensely; he is disappointed when he is abandoned by his "troops" and loyally follows Jaden into danger and defends him after they begin their friendship, and despondent when Blair Flannigan devalues the concept of the Pair Duels.

Above all, Hassleberry will always defer to Jaden; he's the leader of their "troop".

In the Japanese version, he ends the majority of his sentences with either (da) don ("don" being a suffix used in several dinosaur names) or zaurusu (the Japanese equivalent of "-saurus").

In the English dub, Hassleberry speaks with a Southern accent and uses stereotypical cowboy slang and military jargon such as saying "report for duty" before Summoning a monster and "dismissing" them when sacrificing them, leading to a few jokes exclusive to the English dub. He often says "Sam Hill", which is a euphemism for "hell" or "damn". He also refers to Jaden as "sarge" (short for sergeant), rather than "brother" as in Japanese, which overall fits his military conduct and respect for Jaden.

During his youth, Hassleberry was hospitalized after a rock slide during a dinosaur dig. The incident permanently damaged the tibia of his left leg but the bone fragment of a dinosaur fossil he unearthed during the excavation was used to replace it. This incident left Hassleberry with dinosaur DNA. Hassleberry often formed gangs or "platoons" in his youth, but they all eventually abandoned him, a tendency that bothered him. 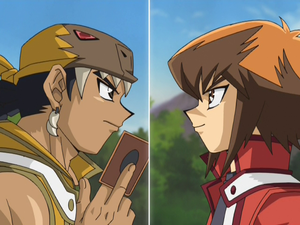 Hassleberry in his Duel with Jaden.

Hassleberry made his first appearance when he complained to Vellian Crowler and Jean-Louis Bonaparte about not getting into Obelisk Blue. He then is seen heading a gang and stealing the Duel Disks of those he defeated. He was defeated by Jaden and returned the stolen items and came to idolize Jaden. (In the original version, this was loosely based on the myth where legendary Samurai warlord Minamoto Yoshitsune defeated Saito Musashibo Benkei; Jaden even compares him to the famed warrior-monk before the Duel starts. Hassleberry's loyalty to Jaden after losing to him, just as Benkei showed the same to Yoshitsune, also emphasizes this.) Although his dorm is technically Ra Yellow, he decides to live in Slifer Red to be closer to and learn from Jaden. From his introduction onwards, he often fights with Syrus Truesdale over who is better suited to being Jaden's best friend. (In the Japanese version, it is over who has the right to call him "big brother".)

Hassleberry is later challenged to a Duel by Professor Sartyr, who wants him, Syrus, and Bastion Misawa to return to Ra Yellow. Hassleberry refuses, Dueling Satyr for the right to stay (and for the right to be fed). He beats Satyr down for most of the Duel, but barely survives Satyr's comeback. Hassleberry is able to win by recalling Jaden's advice and bringing out "Tyranno Infinity" to take advantage of Satyr's removal cards.

Not long afterwards, Hassleberry and Syrus's rivalry comes to a head, and Alexis, sick of their arguing, tells them to Duel one another. Syrus is late to the Duel, but puts up a defensive fight against Hassleberry's Dinosaurs, and locks him into a trap by using the effect of "Ultimate Tyranno" against him. Seeing Syrus falter after searching for Jaden all night, Hassleberry avoids activating his "Jurassic Impact" Trap Card, losing the Duel, but he begins to regret it when Syrus begins bossing him around.

Aster Phoenix's manager, Sartorius, visits Duel Academy, having sensed that Hassleberry could potentially oppose him. He challenges Hassleberry to a Duel, and his "Arcana Force" cards prove to be an issue for Hassleberry. Hassleberry appears to have unusually good luck for one of Sartorius's opponents, even appearing to back him into a corner, but Sartorius remains unfazed the entire time and eventually defeats Hassleberry with his own "Dyna Tank". Despite his loss, Hassleberry is not brainwashed and in comparison to Jaden, is unaffected by Sartorius's powers. Hassleberry states that he believes that as a result of Jaden's influence the dinosaur DNA awoke a great power within him which supposedly protected him from being converted by Sartorius into one of the members of the Society of Light. It is implied that this accident is also the reason for Hassleberry's unique ability to narrow his pupils into reptile-like slits.

During the field trip to Domino City Hassleberry teams up with Syrus in a Duel against the first duo of the Light Brigade, Frost and Thunder; Hassleberry ending up paired off against Frost. Although the two are pinned down by their opponents, who tuned their Decks specifically to combat their cards, they end up pooling their efforts to combine their monsters into "Super Vehicroid - Rex Union". Despite their teamwork, however, Frost ends the Duel by wiping out all players but himself using Mirror of Duality and drags them to Sarina's lair from where they are transported to Kaiba Land as bait for Jaden and Aster by order of Sarina. 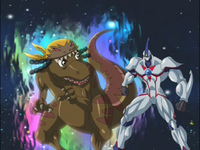 When Sartorius throws Aster towards a pool of lava, Hassleberry athletically saves him. As Jaden Duels Sartorius, Hassleberry, along with Linda, chase after Prince Ojin as he prepares to arm the laser satellite SORA. Unleashing the full force of his dinosaur DNA power and assuming a Duel Spirit form (appointing himself the title of "Spacesaurus"), he travels into space with "Elemental Hero Neos" to divert the satellite's blasts. While the returning Sarina keeps it from firing any further, the two are successful in destroying the satellite.

At the start of his second year, Hassleberry chooses to remain in Ra Yellow instead of advancing to Obelisk Blue; to him, the issue of which dormitory he is officially a part of is irrelevant. Agreeing to aid Jim Crocodile Cook in his investigation of mysterious electromagnetic waves coming from the jungle, his dinosaur DNA reacts to additional signals sent by Thelonious Viper which render him uncontrollable. Jim Duels with Tyranno in a Survival Duel and successfully reverts him to his former self after his first turn. Hassleberry continues the Duel regardless, but Jim defeats him in the end. After the Duel, their Bio-Bands drain their energy.

Hassleberry remains on Jaden's side throughout their stint in the first alternate dimension; he aids Axel Brodie in defending the tennis courts from Duel Ghouls, and when Jaden's friends all end up in a Battle Royal with the Duel Ghouls, Hassleberry is the one to end the Duel, defeating everyone with "Jurassic Impact".

When Jaden and co. go into the other dimension to look for Jesse Anderson, he is infused with the emotion of Hatred sacrificed when Jaden Duels against Brron, along with Alexis Rhodes, Chazz Princeton, and Atticus Rhodes. He is later discovered to be alive and held prisoner with everyone else who died in the Duel Spirit world in an alternate dimension by Yubel.

For Jaden's final year, Hassleberry becomes involved with the events surrounding Nightshroud and the Abandoned Dorm, which had previously been largely resolved the year before his enrollment. He organizes the Pair Duels and pairs up with Blair Flannigan for the tournament for the graduates. He makes it to the final Duel against the pair of Jaden and Alexis during which Blair uses "Partner Change" so that she can be partners with Jaden due to her crush on him. Hassleberry is dismayed by this, as it defeats the purpose of senior and junior students Dueling one another. Alexis later destroys the card and switches back to being with Jaden and defeats Blair and Hassleberry. Comically, Hassleberry displays fear of Alexis and Blair when they were his partner when they got angry.

Jaden asked Hassleberry to find Daigo Sorano, who was being impersonated by Trueman. In his Duel with Trueman, Hassleberry's dinosaur DNA protected him from Trueman (who needed the opponent to carry some form of darkness, which Hassleberry did not have), until Trueman 'revealed' that the dinosaur bone in Hassleberry's leg was that of a dinosaur he had eaten in his previous reincarnation as a dinosaur (in reality, Trueman lied to create darkness within Hassleberry). Hassleberry is then defeated and absorbed into the World of Darkness. He is revived when Jaden calls to him, urging him to grasp a card close to his heart, and witnesses Jaden defeat Nightshroud. He attempts to make a speech on graduation day, but he breaks down before he can finish and is escorted off-stage.

Hassleberry uses an Evolution Deck[3] focused on Dinosaur-Type monsters. He uses cards such as "Big Evolution Pill" and "New Ultra Evolution" to quickly bring out his powerful monsters such as "Super Conductor Tyranno" and "Ultimate Tyranno". Hassleberry also uses "Earthquake" in conjunction with his "Dark Tyranno" to attack his opponent directly. He also uses cards such as "Survival Instinct" or "Spacetime Transcendence" with his "Tyranno Infinity" to increase its ATK, giving him access to an easy to Summon, powerful monster.