From Yugipedia
Jump to: navigation, search
For other versions of this character, see Atticus Rhodes (disambiguation).

Atticus Rhodes, known in the Japanese anime as Fubuki Tenjoin ( , Tenjōin Fubuki), is the missing brother of Alexis Rhodes, who mysteriously disappeared into the old abandoned Obelisk Blue dormitory of Duel Academy. 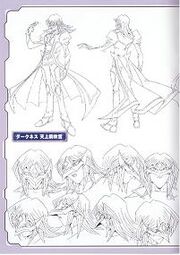 Atticus' design incorporates multiple layers of clothing and a wide range of expressions. Depicted here is the Duelist in full Nightshroud regalia from front and rear alongside views of his head and mask from different angles.

Atticus' character design was overseen by Kenichi Hara. His usual outfit consists of the standard white-coated Obelisk Blue uniform, flowing out the costume's lower back. He will sometimes show up in casual beach wear and he wore a purple suit while Dueling his sister. On occasion, Atticus has willingly worn the clothes that he wore while possessed by Nightshroud on occasions where the dark spirit has re-possessed him. His dark brown hair is arranged sporadically in a fashion similar to that of his sister, with a large portion trailing the upper part of the nape of his neck. He carries an Academy-issued Duel Disk on his left hand.

In the dub, Atticus distributes and subtracts "stars" from others based on their actions as a means of expressing his mood at any given time, while his original series counterpart instead gives out "munekyun points" (which roughly translates to "heart-moving points").

Unlike Alexis, Atticus is cheerful and energetic but can be serious and strong-willed at certain situations while under the influence of Nightshroud he is cold and ruthless.

His original given name means "blizzard" in Japanese, from which he derives his self-appointed title, "Blizzard Prince" in the original version of the series. He writes his signature as "Fubuki 10 Join." His name in the dub is derived from Roman orator and noble Titus Pomponius Atticus who was famous for his impartiality in political issues.

Atticus was close friends with Zane Truesdale and Yusuke Fujiwara. Atticus found Yusuke attempting to conjure up Nightshroud in the Dueling ring underneath the Abandoned Dorm, hoping to gain ultimate power and immortality by becoming its host. Atticus witnessed the ritual, and Fujiwara gifted him with the Nightshroud mask as a parting gift, stating he didn't need it anymore. Later, Atticus and a few of his fellow Obelisk Blue students were under the impression that they would be attending a Duel exam in the Abandoned Dorm, courtesy of Banner. In reality, he and the others were being lured into a trap (in the English version, they visit the Shadow Realm). When he became one of the lost students, Atticus was forced to give into Nightshroud's influence in order to survive.

Atticus while under the control of Nightshroud, alongside "Red-Eyes Darkness Dragon". 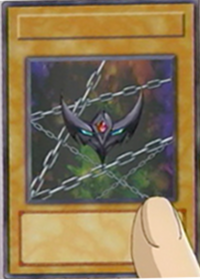 The Nightshroud mask card, in which Nightshroud's soul was sealed after losing to Jaden.

It was never revealed how many other students disappeared along with Atticus. He is forced to Duel Gravekeeper's Chief and only survives by using the power of Nightshroud's mask. For his victory, Atticus receives one-half of a Shadow Charm pendant. Then the leader of the Shadow Riders, Kagemaru, recruits Nightshroud as one of his Shadow Riders.

In his Duel with Jaden Yuki, Nightshroud takes Jaden's friends prisoner and forces him to take part in a Shadow Game where the loser would have his soul sealed in a card. Jaden prevailed and Atticus is released from the dark power that controlled him. Placed in the medical ward, Atticus offered help by giving Jaden his half of the Shadow Charm pendant (Jaden had received the other half himself after being tested in a similar manner). This act was the key to Jaden's victory in his Duel with Camula. He eventually came to his sister's aid during her Duel with Titan, giving her the strength to win.

Atticus promptly reverts to his old self after the Shadow Rider fiasco. Frequently showing up dressed in a Hawaiian shirt and strumming a ukulele, he is incredibly optimistic most of the time, but is seen as an idiot of sorts by his sister. He is also an accomplished surfer, and is popular among women, a fact which leads Chazz to seek his advice on love-related topics. Atticus' antics are a constant source of irritation for Alexis, as he tries without end to set her up with Duelists or get her to go into show business with him in a band called "Bro-Bro and Sissy" (in the original version of the series, he instead urges her to join him under the stage name, "Asuryn," whilst he recruits more followers for his "Bucky" fanclub to rival Kaiser's) and even takes embarrassing photos of Alexis during the costume Duel in episode 42.

Because Atticus was absent during the previous term, he repeats the studies of his second year alongside his sister during the second season. He is among the few Obelisk Blue students who do not come under the influence of the Society of Light.

Following Zane's "rebirth," Atticus Duels him using "Red-Eyes Darkness Dragon" and again comes under the influence of Nighsthroud during the Genex Tournament. However, Zane defeats him and Nightshroud's lingering powers are dispersed again. Zane informs him that there is no darkness in his heart, and that he merely wishes to achieve victory through force. 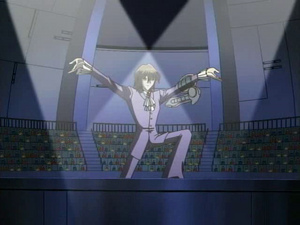 Atticus in his Duel with Alexis, wearing his stage costume.

When Alexis is stripped of her free will in episode 93, Atticus gives Jaden a family card, "Swing of Memories", that meant a lot to Alexis when she was younger but it fails to have any effect on Sartorius' control over her.

In the third season, Atticus was not seen during the first half when Duel Academy is sent to an alternate dimension by Yubel. He does however accompany Jaden and the rest of his group through the next dimension. This is also the time in which he confirmed that he had not previously been sent to the previous alternate dimension with the others. He is later sacrificed alongside Alexis, Chazz and Hassleberry by Brron, Mad King of Dark World. He is later discovered to be alive, and held prisoner with everyone else who died in the Duel Spirit world in an alternate dimension by Yubel. He was then brought back home after Jaden fused his soul with Yubel's.

Atticus has a flashback, and even though he is not fit for it, he willingly Duels Jaden using "Red-Eyes Darkness Dragon" in an effort to remember what happened. Jaden defeats him and succeeds in restoring his memory.

As Nightshroud and Trueman attack Duel Academy, Atticus, Alexis, Mindy, Jasmine, and Chazz are the last students standing. Eventually, the others are all defeated, causing Atticus to forget about all his friends one by one and wander aimlessly through the halls. All the Truemans in the hall do not try to send him into the World of Darkness, probably because he has Nightshroud's mask card. Using the mask card, he is able to see his friends' experiences in the World of Darkness and then directly challenges Nightshroud himself outside Duel Academy. Nightshroud's host is Yusuke Fujiwara, who ultimately defeats him, and though Atticus is able to resist him, his mind is trapped in a scenario where he believed that he would end the Duel in a DRAW. In reality, Nightshroud's "Clear Vice Dragon" had an effect to protect itself that caused Atticus to lose the Duel and be absorbed into the World of Darkness. He is revived when Jaden defeats Nightshroud and attends his graduation ceremony.

In the Yu-Gi-Oh! GX manga, Atticus is a star Duelist of Duel Academy who is studying abroad at the American Duel Academy. In the English version, he is referred to as Rhodie or King Atticus; in the Japanese version, he goes by the moniker "Fubu-king", a portmanteau of Fubuki (his Japanese name) and king.

Atticus uses a Dragon Deck focused around his "Red-Eyes B. Dragon" and other "Red-Eyes" monsters, using methods to easily Summon it such as "Red-Eyes B. Chick" and a combination of "Troop Dragon" and "Call of the Haunted" to quickly gather monsters to Tribute. He also uses cards like "Red-Eyes Wyvern" and "Swing of Memories" to Special Summon it from the Graveyard if it is destroyed, which he later Tributes for his "Red-Eyes Darkness Dragon". Atticus also uses cards such as "Red-Eyes Burn" and "Inferno Fire Blast" to inflict large amounts of damage. As his monsters are focused on punishing the opponent through attacking, he uses "Mirage Dragon" and "Mystical Space Typhoon" to disrupt the opponent's strategies. Atticus later removes his "Red-Eyes Darkness Dragon" and "Red-Eyes Darkness Metal Dragon" from his Deck, making "Red-Eyes Black Dragon" the focal point, even calling it his "partner". This allowed Atticus to use the Deck without repercussions of being possessed by Nightshroud.

This Deck revolves around various strategies involving Beast-Warriors. He gains a continuous advantage with "Spotlight", powering up his "Panther Warrior", and supporting it further with cards such as "Path to Destiny" and "Stray Lambs". His signature card, "Ultimate Stage Costume", also provides his monsters with an extreme augmentation in terms of strength, but cannot be used for offensive purposes.