"Doomsday Duel, Part 1", known as "VS Darkness (First Part) - Red-Eyes Black Dragon's Challenge" in the Japanese version, is the twenty-ninth episode of the Yu-Gi-Oh! GX anime. It first aired in Japan on April 20, 2005 and in the United States on January 30, 2006.

Chancellor Sheppard entrusts the keys to the Spirit Gates to seven Duelists, and the struggle against the Shadow Riders begins. 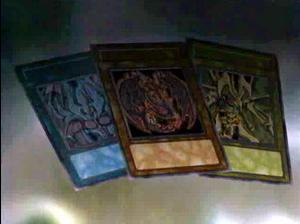 In a dark cave in an unspecified location, a group of figures has gathered. Their leader asks who will be the first to go, and man in a dragon mask steps forward. The leader accepts this, and the man, Nightshroud, vows not to fail, while activating a Duel Disk. At Duel Academy, Chancellor Sheppard stands in his office, and sees a hanglider flying through the air, and believes that the conflict he'd been anticipating has begun. The hanglider lands near the island's volcano, and Nightshroud steps off of it, burning it as he walks away. Around his neck is the second half of the golden pendent that Jaden Yuki received from Gravekeeper's Chief, which begins his glow. At the Slifer Red dorm, Jaden is asleep and his half of the pendant also begins to glow. The next day in Professor Banner's class, Jaden was sleeping, and wakes up when the lunch bell rings. He beings eating, but Banner informs him he'll have to wait, as Chancellor Sheppard wants to see him. He informs Chazz Princeton, Alexis Rhodes, Bastion Misawa have also been called. He accompanies them to Sheppard's office, having also been called himself. Outside the door, they meet Dr. Crowler and Zane Truesdale. They enter, and Sheppard informs them of the three Sacred Beasts. He explains that they are powerful cards that sealed underground on the island, and that the academy was built over their resting place. The legend states that if the cards are released, a worldwide catastrophe will occur. 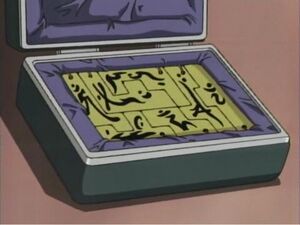 The seven Spirit Keys in their container.

Sheppard reveals that a group of people wishing to release the cards have appeared, calling themselves the Shadow Riders. Their identities are unknown, but one of them has already arrived on the island. Sheppard explains that the cards are sealed behind seven pillars known as the Spirit Gates, and each can only be opened with one of the Spirit Keys. He takes out a black box and opens it, revealing the seven keys. He wants each of them to take one of the keys to protect, and explains that unless the keys are won in a Duel, they cannot open the gates. He's chosen who he considers to be the five best Duelists at the academy, in addition to two more people, as there are seven Shadow Riders. Each of them agree to take a key, and Jaden states that if were a Shadow Rider, he would target the strongest keyholder first, so he believes he'll be targeted early. Crowler believes the same, but thinks either he or Zane should be the first to Duel a Shadow Rider. He informs Jaden that he knows that Zane defeated him in a Duel. Sheppard reminds them that they could be attacked at any time, so they must be careful. That night, Alexis walks towards the Slifer Red dorm, believing Jaden will be the first target, as the Riders will likely challenge who they perceive as the weakest Duelist first. Going by the system the school uses, one would assume it would be Jaden, who is recognizable as a Slifer due to his uniform, unlike Chazz. However, she appears to be too late. She reaches Jaden's room in time to be transported along with him to the island's volcano, with a platform of light being the only thing separating them from the lava. A dragon made of fire flies from the lava and crashes into the platform. Out of the fire steps Nightshroud, who reveals he has both Syrus and Chumley encased in an orb of light over the lava. It will eventually dissipate, so Jaden must Duel him to save them. He reveals that this will be a Shadow Game and takes out a seemingly blank card, stating that the loser's soul will be trapped inside. Jaden thinks back to his previous Shadow Games, and believes he can win this one as well.

The Duel begins, and Nightshroud Summons "Troop Dragon" in Defense Position and then Sets a card. Jaden Summons "Elemental HERO Wildheart", who attacks and destroys "Troop Dragon", whose effect activating, letting Nightshroud Special Summon another "Troop Dragon" from his Deck in Defense Position. Nightshroud begins his turn, and activates his face-down "Call of the Haunted" to Special Summon "Troop Dragon" from his Graveyard in Attack Position. He Tributes both of his "Troop Dragons" to Summon "Red-Eyes Black Dragon" in Attack Position. The fire dragon from earlier bursts from the lava and flies by the light orb that Syrus and Chumley are encased him. Chumley tests the integrity of the orb, and his hand eventually goes right through it. The barrier is starting to weaken. The fire dragon hits the field, and morphs into "Red-Eyes", who attacks and destroys "Wildheart". Jaden draws, and then activates "Polymerization", fusing the "Elemental HERO Clayman" and "Elemental HERO Burstinatrix" from his hand to Fusion Summon "Elemental HERO Rampart Blaster" in Defense Position. Her effect permits her to attack directly while in Defense Position, though the attack power is halved, which Jaden activates now. Nightshroud activates "Inferno Fire Blast", which inflicts the attack points of "Red-Eyes" to Jaden as damage, at the cost of "Red-Eyes" being unable to declare an attack this turn. This reduces Jaden to 700 Life Points. Nightshroud then Summons "Attachment Dragon", which he is able to equip to Jaden's "Rampart Blaster", forcing her into Attack Position. The barrier around Syrus and Chumley is weakening further, and they nearly fall out of the hole in one side of it. With the hole there, they can now feel the heat of the fire dragons and lava around them.

Turn 1: Nightshroud
Nightshroud draws "Troop Dragon" and subsequently Normal Summons it (700/800) in Defense Position. He then Sets a card.

Turn 3: Nightshroud
Nightshroud draws. He then activates his face-down "Call of the Haunted" to Special Summon "Troop Dragon" (700/800) from his Graveyard in Attack Position. Nightshroud then Tributes his two "Troop Dragons" in order to Tribute Summon "Red-Eyes Black Dragon" (2400/2000) in Attack Position. Since "Troop Dragon" has been removed from the field, "Call of the Haunted" is destroyed. "Red-Eyes Black Dragon" attacks and destroys "Elemental Hero Wildheart" (Jaden 4000 → 3100).

The English version cuts several brief scenes after the opening credits: in the first scene Kagemaru and Shadow Riders have a meeting in an underground cave, and in the second Asuka and Kaiser notice Darkness' hanglider arrive.

In the Japanese version, Cronos accepts his Spirit Key and tells Samejima that he should not have informed the students what they'll be facing, as it could frighten them. In the English version, Crowler accepts the key because it is a "posh piece of jewelery".

In the Japanese version, there is a scene in which Judai talks with Sho and Hayato about the Spirit Keys. The topic eventually turns to Kaiser, and there is considerable confusion. Sho usually addresses Judai as "aniki", which means "big brother". Judai suggested they wait for someone to challenge Sho's aniki, however, he was talking about Sho's actual older brother, Kaiser, whom Sho usually addresses as "nii-san". In the English version, they simply talk about how nervous Jaden should be about facing the Shadow Riders.

As Darkness introduces himself in the Japanese version, he reveals that light of his half of the Shadow Charm pendent was what led him to Jaden. In the English version, he states that "the Gravekeeper must be getting sloppy" to have lost to Jaden.