"A Reason to Win", known as "Dark Arena is Activated! Asuka VS Titan" in the Japanese version, is the forty-first episode of the Yu-Gi-Oh! GX anime. It first aired in Japan on July 13, 2005 and in the United States on March 1, 2006.

Alexis Rhodes Duels Titan, the sixth of the Shadow Riders, in an effort to recover the lost memories of her brother.

Atticus Rhodes is still in the infirmary, with his sister Alexis still watching over him. She thinks to herself that there are only two Shadow Riders remaining, but that she would be happier if her brother would just wake up. She remembers when they were children, and Atticus would give her Dueling tips, advising her to include her favorite cards in her Deck, not just powerful ones, and to always have a reason to Duel. She hears a voice, and a dark cloud forms behind her. The voice offers to restore her brother's memories - if he is defeated in a Duel. Alexis recognizes the voice as that of Titan. The darkness engulfs her, and she disappears.

Jaden Yuki's Winged Kuriboh and Chazz Princeton's Ojama spirits are acting up, and lead their partners, along with Syrus Truesdale and Chumley Huffington, to the infirmary. They meet Zane Truesdale and Dr. Crowler there, who inform them that Alexis has vanished. They enter the infirmary to find Atticus collapsed on the floor. He informs them that Titan kidnapped Alexis. Dr. Crowler appears visibly nervous, as he never paid Titan for his attempt to scare off Jaden, and believe he's come back collect his money. Titan has taken Alexis to the Abandoned Dorm, and the Duel begins just as the others reach the place. Titan Summons "Picador Fiend" and Sets a card. Alexis Summons "Cyber Tutu", which is permitted to directly when the opponent has no monsters weaker than her. Titan's Set card is "Des Counterblow", which he plans to use to destroy "Cyber Tutu" when she attacks, but Alexis plays "Allegro Toile" to destroy it before she attacks.

Titan attacks with "Picador Fiend", but Alexis turns the attack into a direct one with "Doble Passe", which also lets "Cyber Tutu" attack Titan directly once more. However, Titan activates "Ritual of the Matadoor", Tributing "Summoned Skull" from his hand to Ritual Summon "Matador Fiend". He then activates "Dark Arena", a Field Spell Card that lets each player's opponent choose the attack target and forces all monsters to attack each turn. Titan comments that his previous Duels were not true Shadow Games, but he no longer needs to use illusions and trickery. He proceeds to envelop the field in darkness, preventing Alexis' friends from watching the Duel. "Dark Arena" allows the opponent to chose attack targets when monsters attack, and forces all monsters to attack each turn. This is reflected on the field as the darkness preventing monsters from seeing what they are attacking, similar to the tactic that PaniK used in the previous series. 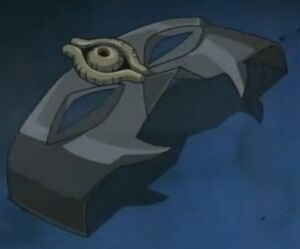 Chazz questions Jaden if there's anything that happened in his own Duel with Titan that could help Alexis, but Jaden responds that the Titan he Dueled didn't have real powers. Alexis uses "Polymerization" to Fusion Summon "Cyber Blader", whose ATK doubles to 4200 since Titan currently has two monsters on the field. She attacks, and Titan chooses "Matador Fiend" as the target, whose effect triggers, negating the battle damage, preventing its destruction in battle and destroying "Cyber Blader". "Cyber Tutu" is also forced to attack via "Dark Arena" and cannot activate its effect to attack directly because "Matador Fiend" has less ATK than it. Alexis' Life Points drop to 1800, and she feels the true pain of a Shadow Game for the first time. Titan reveals that he lost to Jaden and the shadow creatures attempted to devour him, he pleaded for both mercy and power, and offers his own soul to save his life. A voice responded to him, and gave him his new mask that allowed him true powers of darkness.

Alexis Summons "Cyber Gymnast", whose effect can be used to discard a card and destroy an Attack Position monster, but her hand is empty, so she ends her turn. Titan reveals that "Picador Fiend" can attack directly when "Dark Arena" is on the field, and Alexis is reduced to 200 Life Points. He then Summons "Banderillero Fiend", whose effect destroys"Cyber Gymnast". Alexis collapses, her strength drained. Atticus chooses this moment to call out to her, and she brings herself to her feet. Alexis uses "Pot of Greed", drawing two cards - "The Warrior Returning Alive" and "Fusion Recovery". These allow her to recover the cards necessary to Summon "Cyber Blader" from her Graveyard. Because there are three monsters on Titan's field, the effect of "Cyber Blader" negates all of his card effects. Alexis attacks "Matador Fiend", winning her the Duel. Titan is consumed by the shadow creatures once more, and his Shadow Charm falls to the ground. Atticus reveals what happened to him the past - he was selected for a special class, and Dueled at the Abandoned Dorm. He was pulled into the shadows much like Titan was and was forced to Duel for his life. Though he doesn't know who orchestrated it, he reveals that the person that called him for the class in the first place was Professor Banner.

Turn 1: Titan
Titan draws "Picador Fiend" and subsequently Normal Summons it (1600/1200) in Attack Position. He then Sets a card.

Titan then activates "Ritual of the Matador" to Tribute "Summoned Skull" from his hand and Ritual Summon "Matador Fiend" (0/0) in Attack Position. He then activates "Dark Arena". Now both players can select the attack targets of their opponent's monsters and every face-up monster must attack if possible.

Turn 4: Alexis
Alexis draws "Polymerization" and subsequently activates it to fuse "Etoile Cyber" with "Blade Skater" in order to Fusion Summon "Cyber Blader" (2100/800) in Attack Position. Since Titan has two monsters on his side of the field, the ATK of "Cyber Blader" is doubled ("Cyber Blader": 2100 → 4200/800).

Alexis then activates "Polymerization" to fuse "Etoile Cyber" with "Blade Skater" in order to Fusion Summon "Cyber Blader" (2100/800) in Attack Position. Since Titan has three monsters on his side of the field, the effect of "Cyber Blader" negates the effects of every card Titan controls. "Cyber Blader" then attacks and destroys "Matador Fiend" (Titan 2000 → 0).

When Titan confronts Alexis, he specifically makes reference to taking her back to the Shadow Realm with him in the English version. In the Japanese version, he mentions the World of Darkness, though it does not appear to be the same that appears later in the series.