From Yugipedia
Jump to: navigation, search
This article is about the human. For the Duel Monster Spirit, see Titan, the Rock Spirit.
For other versions of this character, see Titan (disambiguation).

Titan (タイタン, Taitan) is a hit man originally hired by Dr. Crowler to deal with Jaden Yuki. He used fake Shadow Duels to intimidate his opponents, and later becoming a Shadow Rider after invoking a real Shadow Duel. His name is rendered as Titán in the Japanese version of some video games. 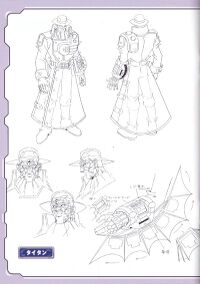 His general modus operandi and physical stature are reminiscent of PaniK, though he also looks, sounds, and acts a lot like pro wrestler The Undertaker (and at one point says "rest in peace" to his first victim; this is one of the Undertaker's prominent catchphrases.) He wears an iron mask, a hat and a large jacket, as well as a fake Millennium Puzzle. He normally creates fog around him to appear as if a true Shadow Game was imminent.[1]

Titan remains calm most of the time, and is confident in defeating his opponents, calling himself a "pro". He never turns his back to his opponents and make the set of his fake Shadow Games appear to be real.[1] Titan intimidates his opponents during the Duels showing his Millennium Pendant, doing tricks to mimic a Shadow Duel and by telling the Duelists their mistakes or their lack of damage they've done.[2]

The dub also states that Titan used to work as a carny, an aspect not present in the original. There is also speculation that Titan has a family in the dub, as his last words in his first appearance before being consumed by the darkness are "Tell my kids I love them!". 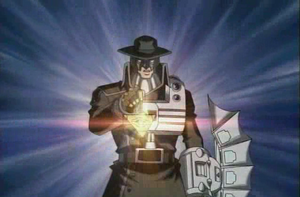 Titan was known as the Shadow Duelist, usually being hired to defeat Duelists using Shadow Games, charging to his clients three months of their salary. Despite his reputation of possessing the power of a Millennium Item, it is in fact a fake Millennium Puzzle, and Titan used various tricks to mimic a Shadow Game.[1]

Titan appeared at first defeating a Duelist in the street full of fog in a fake Shadow Game and showed a fake Millennium Puzzle to his opponent and uses a fake Mind Crush against him. After he falls unconscious Titan takes all his rare cards. He is then contacted by Crowler to take down Jaden Yuki. Crowler and Titan met at the pier of Duel Academy where Titan agreed to defeat Jaden in exchange for three months of Crowler's salary.[1]

Comparison between a false and a real Shadow Game

Titan became the victim of a real Shadow Duel and was possessed by a spirit from the Abandoned Dorm and is forced to continue the Duel. However he is dragged into the darkness (Shadow Realm in the dub) after being defeated.[2]

He was saved by Kagemaru under the condition that he would serve as the sixth of the Shadow Riders, wearing a Shadow Charm mask to bind him to the real world. Taking advantage of Alexis' desire to restore her brother's memories, Titan challenged her in the Abandoned Dorm where they first met. Following his defeat, his soul is pulled back into the pits of darkness.[3]

Titan plays Archfiend Decks, composed of Fiend-Type monsters which provide him field control at the cost of his own Life Points.

Titan's first Deck revolves around "Terrorking Archfiend", and the majority of its cards are appropriately chess-themed.

During his second duel, Titan's Deck instead focuses on "Matador Fiend", and its cards are themed after Spanish bullfighting.