Professor Thelonious Viper, known as Professor Cobra (プロフェッサー・コブラ Purofessā Kobura) in Japanese, is a professor hailing from West Academy and the main antagonist for the first arc of season 3. He was a former military commander who after losing his adopted son Pierce, allied with Yubel to revive him using the Bio-Bands to drain energy from the academy's duelists. After failing to defeat Jaden Yuki, Yubel changes his memories and then leads him off a ledge causing him to fall to his death.

While performing military services in a war that ravaged his country, Viper came upon an infant whom he believed saved his life by drawing his attention away from an area which was suddenly detonated. In the dub, it is simply stated that the rest of the unit he was with was ambushed and captured while he left them. He adopted the child, Pierce, and came to regard him as the "angel" in his otherwise torturous life. Years later, chasing after Duel Monsters cards given to him by Viper as a present that were swept up in the wind, Pierce was run over by an oncoming vehicle (This scene was cut from the dub, here, he died of an illness). 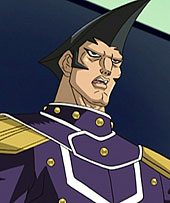 Later on, Viper entered Duel Academy in the third year and in a desperate attempt to aid Yubel (who promised to raise his son from the dead), Professor Viper pitted students against one another in Survival Duels. The only concern he had was that Adrian Gecko grew suspicious of him. Viper attempted to get rid of him by forcing him into Survival Duels and setting the Bio-Band drainage level to maximum in an attempt to kill him, knowing that Adrian would still Duel. However, Adrian forced Viper to lower the level when he got the entire Ra and Obelisk dorms to Duel at the same time. Adrian later manipulated Jaden and his friends to act as decoys while he infiltrated Viper's hideout for a card Viper had. When Jaden Yuki and his friends broke into Viper's hideout, Viper found that Yubel still needed more energy and faced off against Jaden in a Duel (in the dub, part of the reason was that Yubel wanted to see Jaden suffer). When he lost, Yubel, manifesting in energy form as Viper's son, modified Viper's memories of Pierce's death, deceiving him into believing that Pierce never died. In a stupor, Viper followed his "son" to the edge of the platform where he seemingly fell to his death. (In the US version: after Yubel grabs Viper's face, he simply disappeared, which heavily implies his death, though this is not specifically stated.)

After Jaden became The Supreme King, his words alongside Mr. Stein's linger in his mind, specifically about his not treating Duels as anything more than a game. Viper is seen one more time prior to Jaden's final Duel with Yubel as Jaden remembers all the people Yubel has wronged.

Viper plays a "Venom" Deck, which allows for the distribution of "Venom Counters" through his monsters such as "Venom Snake" and "Venom Boa" to an opponent's monsters as means of weakening and ultimately destroying them. Several of his monsters are based on the nāga, a serpent-like race in Hindu and Buddhist mythology. One of these creatures, Viper's signature card "Vennominaga the Deity of Poisonous Snakes", is able to circulate poison in the opponent's body upon inflicting damage, declaring an automatic victory for its owner within three turns.