Sheppard, known as Samejima () in Japan, is the chancellor of Duel Academy.

Sheppard has all the traits of a beloved school headmaster, being both a strict disciplinarian and a child at heart. He has been known to stand up and cheer when watching a particularly exciting Duel, and covets a kiss from Ms. Dorothy enough to make it a prize for winning competitions.

During the first year he recruits Jaden Yuki, Alexis Rhodes, Chazz Princeton, Zane Truesdale, Bastion Misawa, Crowler and Banner to guard the seven Spirit Gates from the Shadow Riders. When Kagemaru arrives at Academy Island, Sheppard is the first to recognize him as the school's superintendent.

In the second year, he left the job to Crowler. He leaves the school to invite Duelists to the Genex Tournament and to confront Zane. Sheppard meets Zane in a monastery on top of a mountain, where Zane seemingly trained as a Duelist when he was a child. Although Sheppard loses when Zane betrays his "Cyber End Dragon", he gives Zane a Genex Medallion and invites him to the tournament. Then he returns near the end of the second year to reclaim his job.

At the start of third year he is concerned that his best Duelist Jaden is still in the lowest rank dorm, hoping that Thelonious Viper whom he has just hired would push the boy into advancement. (In the original Japanese version, he wanted Viper to help Jaden continue to grow as a Duelist.) At the end of the third season, during a meeting with Crowler, he decides he will begin a search for the remaining students who disappeared in the Abandoned Dorm.

In the fourth season, Jaden requests Sheppard to be allowed to leave immediately as he felt that all the major bad things at the school were because of him and he knew another threat was approaching. Sheppard was shocked at this, but he gets a phone call and asks Jaden to go to the island volcano, which Jaden reluctantly does. Later he and Ms. Dorothy would participate in the Duel Pair Tournament, but are beaten by Jaden and Alexis. Much later, he is targeted and beaten by Makoto Inotsume as part of the latter's plan to destroy the Cyber-Style.

After Nightshroud is defeated, Sheppard gives the graduating students their diplomas during the graduation ceremony.

Chancellor Sheppard welcomes the player at the beginning of each of the games. He can be found in his office at all times of the day until nighttime, and does not duel at any point of the games. 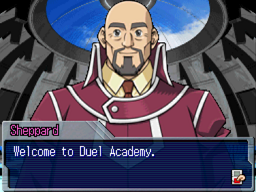 Chancellor Sheppard appears as a supporting character, welcoming students to Duel Academy on the player's first day at the island. As the game progresses, he can be seen commenting on various events involving Duel Academy at large as well as organizing the tournament during the second year. He does not duel the player at any point of the game.

Congratulations!
You have been accepted to Duel Academy after passing the entrance exams.
All Academy correspondence will be sent via email, so check back often.
Enjoy dueling at Duel Academy!

Congratulations for enrolling!
You have passed the entrance exams and are now enrolled in the Academy.
From this point onwards, correspondence concerning the Academy will be handled by email.
As such, we request you remain attentive about your email.
Please enjoy dueling at the Academy.

Let me explain Duel Academy Points.
Here at Duel Academy, points are added to your Duel Disk based on the performances in your duels.

You can use points to buy packs and increase the strength of your deck.

Allow me to explain Duel Academy Points.
While here at Duel Academy, Duel Points will be added to your Duel Disk based on your performance while dueling.
You can buy packs using these Points, which will allow you to strengthen your Decks.

Your PDA is state-of-the-art KaibaCorp technology. You can use it to find opponents you want to duel.
If you touch and search your map, as you get closer to a duelist, it changes from green»yellow»red.
Search for duelists on the island using your map and exploring buildings and facilities.

Using your PDA, which is equipped with the latest state-of-the-art technology provided by Kaiba Corporation, you can look for opponents to duel with.
When tracking down someone on the map, according to the distance between you and another duelist, it will first turn green, then yellow, and finally, red.
Look for other duelists on the map, or inside the various buildings and facilities around the island.

As a new school year arrives, so does new students to Duel Academy. [sic]
In order to commemorate our new friends, I'm planning to hold a school-wide duel tournament.
Feel free to duel your upperclassmen or the incoming freshmen. Your sole goal... is to have fun!

With a new year beginning, new students have enrolled in Duel Academy.
We shall celebrate the occasion by holding a school-wide duel tournament. It will be the New Student Enrollment Commemoration Tournament.
There will be no upperclassmen or underclassmen in this context. We hope everyone enjoys dueling with all kinds of people.

I have an important announcement.
With the school duel tournament complete, I am changing a section of the Forbidden/Limited Card rules.
Among all the Forbidden Cards, you are now allowed to have 1 of each type in your deck.
You may now proceed dueling with this new rule in effect.

We have important news for all of you.
Following the safe and successful ending of the New Student Enrollment Commemoration Duel Tournament, we shall make one change concerning the rules of the Forbidden/Limited Card List.
From now on, you may include a single copy of 1 - and only 1 - Forbidden card in any Deck.
You may now continue dueling with this new rule in effect.

Sheppard plays a Cyber Ogre Deck, a Cyber Style Deck with a strategy distinct from Zane's. Sheppard's Deck allows him to turn his opponent's cards against them by using cards such as "Cyber Shadow Gardna" (a Trap Monster that can copy the ATK of the monster it is battling) and "Scrap Fusion" (which allows the user to Summon a Fusion Monster from their opponent's Fusion Deck by using monsters in the opponent's Graveyard as Fusion Material).

His signature cards are "Cyber Ogre" and its Fusion counterpart, "Cyber Ogre 2", both of which gain additional ATK when battling an opponent's monster.