Jesse Anderson, known as Johan Andersen (ヨハン・アンデルセン, Yohan Anderusen) in the Japanese version, is a character in the Yu-Gi-Oh! GX manga.

In the manga, he and the rest of the Overseas Champions are from the American Duel Academy. Jesse seems to have an interest in bugs and he first meets Jaden Yuki and Syrus Truesdale when he is chasing a rare beetle. He also plays an Insect Deck to reflect his interest. He's selected to tag with Adrian Gecko in a Duel against Bastion Misawa and Alexis Rhodes. Adrian is annoyed that Jesse is his partner, as he believes Jesse won't take the Duel seriously. Jesse and Adrian ultimately lose the Duel. 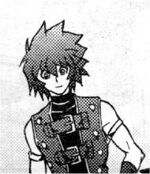 The cameo of Jesse's possessed outfit in the last chapter of the manga.

Jesse later challenges Syrus, who gains an early upper hand in the Duel. However, Jesse Summons "The Tripper Mercury" and becomes possessed by Tragoedia, defeating Syrus. After this, he appears to not remember his possession by Tragoedia, and is even unsure if he defeated Syrus or not until the latter confirms it. Syrus was going to ask him about "The Tripper Mercury" but Jesse leaves after spotting a red dragonfly flying away causing Syrus to believe he imagined it. Sometime afterwards Tragoedia possesses Jesse once more, and leads him into the warehouse where Tragoedia is waiting. Jesse has all the energy drained from his body and "The Tripper Mercury" taken away from him. Jesse falls into a coma afterwards and would not wake up from it until Tragoedia was defeated. A few years later Jesse can be seen in the stands about to watch Jaden Duel against Koyo Hibiki.

Jesse uses an Insect Deck, including the "Papillon" monsters along with his Legendary Planet, "The Tripper Mercury".