David Rabb (デイビッド・ラブ, Deibiddo Rabu) is a Duelist from the United States and companion of Zane "Kaiser" Truesdale whom he follows to Duel Academy.

David Rabb and Reggie MacKenzie visited the Japanese Duel Academy as transfer students from the American Duel Academy. They traveled to the island with Zane Truesdale, who had been a Japanese transfer student at their school. On arrival, he noted that there was smoke coming from the volcano, but reckoned there was no danger of it erupting. He and Reggie were both eager to see the skill of the local Duelists.[2]

When Chancellor Sheppard announced that the Japanese academy would be hosting the a tournament in celebration of Zane's return, where the winner would face Zane in a Duel, Reggie and David requested permission to participate. Having not faced Zane in America, David hoped to get a chance now, which Reggie teased him over, saying that she would the one who wins that opportunity.[2]

In the preliminary rounds of the tournament, David challenged Syrus Truesdale to a Duel, knowing he was Zane's brother. Before they began, he asked Syrus if he was aware of any spirits residing within cards. Although Syrus recalled Jaden describing his "Winged Kuriboh" as such, Syrus had a bad feeling about mentioning it to David, so he said "no". David apologized for asking such an odd question and proceeded to easily win the Duel, using his Planet card, "The Big Saturn".[2]

David later crosses paths with Jaden Yuki, but decides not to Duel him because of his Slifer Red status as the defeat of a Slifer Red will get him a meager amount of points compared to Ra Yellow and Obelisk Blue students. Because he is fluent in both English and Japanese, he is able to converse with the other characters. In addition, at some point before coming to Duel Academy, David was beaten in a Duel by Atticus Rhodes, further motivating him to defeat Alexis Rhodes in a single turn during the tournament. David is defeated by Chazz Princeton, whose final attack shatters the earring and releases David from Tragoedia's control. James Crocodile Cook later reveals that he had been rivals with Rabb when they both in America, and Jim seeks out Atticus as the latter was able to defeat Rabb before he did. 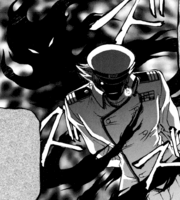 He served Tragoedia, and sought Duel Spirits on its behalf.