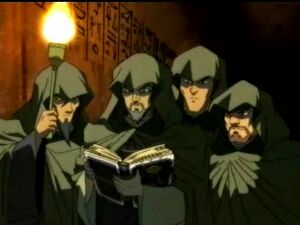 Aknadin and the conspirators with the Millennium Spellbook

Aknadin explains to Pharaoh Aknamkanon that the Millennium Spellbook is the main reason for Egypt's war against its neighboring countries. If taken, the book lists spells dealing with "Shadow Alchemy" (RenkinJyutsu) and could provide the enemy with the ultimate power to create invincible armies and suggests they should attempt to decipher the texts themselves, as indeed they recently have had a breakthrough: they deciphered one of the spells!

Unknown to Aknamkanon, the spell which Aknadin and the others managed to translate is a Dark Ritual allowing its caster to forge seven "Millennium Items" that could eliminate Egypt's invaders, and bring tranquility to the realm once again. What they refrained from informing the Pharaoh that in order to do so, 99 human sacrifices were required.

In the anime, Aknadin and the conspirators hypnotized their soldiers into forgetting their upcoming actions of massacring the Kul Elna citizens then have their blood, bone, and flesh melted in with the gold that was cast in the mystic rite that formed the items. In the English dub, this gory concept is replaced with the inhabitants' "spirits" were harnessed instead to complete the rite that forges the Millennium Items. Unknown to Aknadin and the conspirators, there was a survivor that witnessed this all. Also in the anime, the ritual's completion lead to a dark spirit that appeared and attacked them all while Aknadin used the Millennium Eye to avoid this.