Aknadin, known as Akhenaden in the Japanese version, is a character in the Yu-Gi-Oh! anime. He is the father of High Priest Seto and younger twin brother to the former Pharaoh Aknamkanon, thus making him the uncle to the current Pharaoh Atem. He was also the first owner of the Millennium Eye and the creator of all the Millennium Items. He was transformed by Zorc Necrophades into the Great Shadow Magus (known as the High Priest of Darkness in the Japanese version). 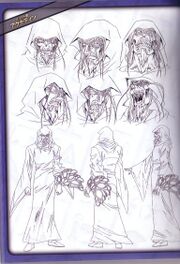 As a human, Aknadin is a thin tan-skinned man with grey hair and dark grey eyes. He has bushy eyebrows, and a fairly neatly trimmed mustache and triangular beard. Though he is one of the High Priests, Akandin dresses humbly in a hooded tan robe with voluminous sleeves and simple shoes. He carries his Diadhank on his left hand. Prior to gaining the Millennium Eye, which he wears in his left eye socket, Aknadin had a healthier build and wore more traditional robes and headdress, but still wore comparatively simple and humble robes for his position, and his hair was shorter, darker, and more restrained.

As the Great Shadow Magus, Aknadin becomes taller and his fingers become clawed. He becomes clad in black and purple robes, with purple bracers and torso armor with a high collar. He wears a smooth white mask with masses of red hair attached, and a black section over the left eye that contains a hole for the Millennium Eye. The Eye of Wdjat is emblazoned in gold at the base of his neck, which is armored in maroon armor with hieroglyphics traced into it, and a black strip running down the throat. Beneath his mask, Aknadin's hair has turned pure white, and appears to have become longer, and his skin has darkened and become heavier. He retains his DiaDhank, but it appears to have been enlarged alongside him. 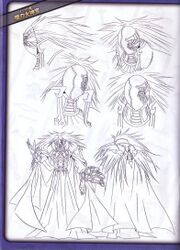 Aknadin presents himself as a fair and just man in terms of dress and demeanor, setting a judged criminal free after exorcising his ka. However, Aknadin is desperately tempted by his darker urges, and he is well aware of this temptation and struggles against it constantly. Though he loved his brother Aknamkanon, he also resented his twin for holding the position of Pharaoh. After Bandit King Bakura infused his evil essence into the Millennium Eye, Aknadin began to slowly give into his darker desires, presenting himself as prepared for the Pharaoh's return, but planning to instill Seto as a replacement Pharaoh with his own "god" monster. He became willing to use Seto's plan of capturing prisoners with evil ka to assemble powerful monsters, a decision that shocked Seto.

Lineart of Aknadin's face after his transformation.

Despite his darkness and resentment of Atem and Aknamkanon, Aknadin still dearly loves his son Seto. After Seto returned and became a High Priest, Aknadin mentored him and attempted to instill a sense of fairness and justice inside him. He was subsequently horrified by Seto's plan to assemble the ka of prisoners, as it reminded him of the deeds that he had committed in the past. Even at the depths of his darkness, he planned to have Seto inherit the throne of Pharaoh, as per the wish that he had made on the Millennium Eye.

Akandin is fully willing to commit grievous deeds when necessary; slaughtering the citizens of Kul Elna in order to create the Millennium Items and betraying Atem and entering into the servitude of Zorc Necrophades in order to grant Seto the throne. He is tormented by his actions in Kul Elna, despite the rationals, but after being influenced by the evil of Bandit King Bakura, he lost this restraint. Despite the extremes he took, he did end up getting his wish, but ironically it came from Atem's own will and generosity. It is assumable that Aknadin was very happy about this and that his anger, envy and corruption, was finally laid to rest, since he no longer had reason to feel those emotions.

His name corresponds to the former real-life Egyptian Pharaoh, Akhenaten, who reigned during the 18th Dynasty.

As a holder of the Millennium Eye, Aknadin can use all of its abilities, including the ability to see evil spirits within the souls of humans and call forth monsters from stone tablets through the use of his Diadhank.

As the Great Shadow Magus, Aknadin has demonstrated the ability to project dark energy blasts, open portals, summon destructive monsters, and cast dark energy bolts from the Millennium Eye, capture the White Dragon in a Spellbinding Circle, and seal it in a stone, and infiltrate people's minds, putting them under his control.

Aknadin was the advisor and twin brother of Pharaoh Aknamkanon. While he loved his brother dearly, he was secretly resentful of his brother for being Pharaoh while he was relatively unimportant. When Egypt was under attack, Aknadin pushed his brother to fight back and protect his people, but Aknamkanon refused on the grounds he wanted peace. Eventually the invading armies grew too close to the palace to be repelled, and Aknadin suggested using a spell from the Millennium Spellbook to create the Millennium Items. Faced with the undeniable fact his kingdom may be destroyed, Aknamkanon agreed.

Aknadin abandoned his son Seto and his wife for fear his actions would later cause criminals to target them, as well as to shield them from prejudice. Aknadin led a group of soldiers to the village of Kul Elna, where he ordered the thieves there killed, and their blood collected for the ritual to create the items (in the dub, the souls of the thieves are collected, although it is indirectly implied they are still killed). The only survivor of this slaughter was Bakura. The slaughter was so horrific that Aknadin never told his brother of it, and had all the soldiers he had taken brainwashed so as to forget the incident.

Aknadin succeeded in crafting the Millennium Items, but a chasm opened in the chamber where the ritual has taken place. Zorc Necrophades rose from the chasm and ensnared Aknadin, presumably to kill him. Aknadin gouged out his eye and placed the Millennium Eye into the socket, using its magic to protect himself and repel Zorc. On the journey back to the palace, all the soldiers but Aknadin fell, and only he survived. Upon the invading army's attack, Aknadin, his brother and five other priests used the Millennium Items to hold them at bay and defeat them.

Aknadin would later remain a member of the Sacred Court after his brother sacrificed himself and his son Atem took the throne. Aknadin also witnessed his son Seto's rise to power as the High Priest and holder of the Millennium Rod. Aknadin was amazed his son had made his way from peasant to priest despite him abandoning him, and spent all his spare time training Seto, although he never told him they were related. Both Seto and Atem were unaware that they were cousins, although if Atem knew Aknadin was his uncle or not is not addressed. Despite his outward personality of being loyal to the Pharaoh and his kindness and mercy to criminals, Aknadin's inner jealousy caused him to desire Seto becoming the Pharaoh more than anything else, and Aknadin would in truth despise his brother and nephew, who took the kingship that Aknadin desired for himself and his son.

In the Millenium World arc, when Thief King Bakura attacked the Royal Palace and accused Atem's father of slaughtering his village, the Sacred Court denied such claims, but Aknadin was horrified to realize Bakura must have survived the destruction, and as a result of the rage and evil that surely had taken root in him, the power of his Ka "Diabound" would be nearly limitless. Using the power of his Millennium Ring to get past the guards, Bakura would later attack Aknadin at the palace itself, and promise him Aknadin's dark side would be brought out. He sealed part of his evil into the Millennium Eye, which began to corrupt Aknadin.

Aknadin's jealousy towards his brother is exposed by Zorc and he eventually becomes convinced that his son should be Pharaoh instead. In an act that would ultimately lead to Atem's defeat (but not death), he attacked the stone tablet that housed Slifer the Sky Dragon, weakening it for Bakura to defeat it and cast Atem into a chasm.

Aknadin then had several prisoners, including the young girl Kisara, taken to a secret underground arena where he made them battle each other using their Ka. When Seto found him, Aknadin explained he (Seto) would be the next Pharaoh, and he was simply doing his duty to him by creating an army for him: by having the prisoners fight, their evil souls grew stronger and their ka more deadly. When Aknadin ordered Kisara to battle, Seto stepped in to save her at the risk of his own life, refusing to let Aknadin kill her or to extract her Ka, the White Dragon.

Aknadin accompanied the attack on Kul Elna, where he and the priest Shada found the tablet for Bakura's Ka Diabound. When Shada attempts to tell the other priests, Aknadin knocks him unconscious and takes his Millennium Key. During this time, Bakura had been defeated by Atem, Mahad and Mana. Overseeing the events, Yami Bakura used a talisman to freeze time, while Aknadin collected the remaining Millennium Items from the incapacitated priests and placed them in the Millennium Stone to call Zorc. 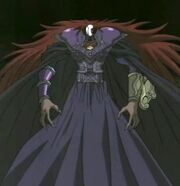 Akhenaden as the Great Shadow Magus, corrupted by Zorc Necrophades.

Zorc endowed Aknadin with the power of the shadows and transformed him into the Great Shadow Magus. Aknadin then proceeded to tell Seto of his royal lineage, encouraging him to join him and rule the world with him and Zorc. Seto refused, and Aknadin attacked, only to be repelled when Hassan stepped in to protect them. During this time Yami Bakura used the power of the Millennium Items to revive Bakura and Diabound, who distracted the priests while Akhenaden drew Seto into a portal to appear at the palace, where he had also teleported Kisara. Seto protected Kisara once again, and Kisara responded in kind by calling forth the White Dragon to battle Aknadin.

Aknadin is destroyed by the White Dragon.

Aknadin sealed the White Dragon in stone before killing Kisara herself (Kisara's spirit is sealed with the White Dragon in the English dub). Seto responded by summoning the White Dragon himself to strike down Akhenaden before stabbing him and killing him. Aknadin sent his spirit into Seto, and controlled him to attack Atem who had just arrived. Atem was overpowered, but the spirit of Kisara in the form of the White Dragon entered Seto's mind, where she killed Aknadin for good (in the dub, Aknadin is sent to the Shadow Realm). At the end of the Ceremonial Duel, Aknadin is seen as one of the souls waiting for Atem in the afterlife. Because of this it is presumed that Aknadin saw what Atem did for Seto by giving him the throne and subsequently forgave Atem as well as his older brother.