Adrian Randolph Crump III, known as Shuzo Otaki in the Japanese version, is a character in the Yu-Gi-Oh! anime. He is a member of the Big Five. He was formerly a KaibaCorp accountant who oversaw the company's finances (Human resources in the original version).

Adrian Crump, like the rest of the Big 5, wears a business suit. His double breasted suit is green. Crump has black hair, black eyes, and a mustache. He is fairly short and appears to be middle-aged (in the Japanese he is stated to be 55). He has furled eyebrows, giving him a Middle Eastern look. Crump is fair skinned. In the Virtual World, he takes the appearance of Nightmare Penguin.

Crump is portrayed as the most comedic and high strung of the Big Five, as he shows exaggerated facial expressions when hit, or surprised like an animated cartoon character (compared to his associates who all manage to stay serious during their Duels while in Deck Master mode). Ironically, he also seems to be the most tragic member of the Big 5, as he was neglected by his parents as a child.

Despite being the most comedic and the most tragic, he is also quite sadistic, as he intended to leave Téa frozen for all eternity, which would make her suffer far greater than wandering cyberspace forever as the other four had intended to do to their opponents.

Crump is obsessed with both penguins and numbers, especially statistics. He frequently uses statistics in everyday life and likes to gather data about people.

In the Japanese version, Crump is also a pervert, preferring to inhabit a young girl's body.

Crump has a gruff voice. He has a tendency to use numbers and sometimes ice-themed puns in his speech. In the Spanish version (where he is dubbed by Antonio Villar) he does not use the ice-themed puns but does lots of numbers/porcentages puns.

Crump was an only child. His parents had no time for him since they worked late (in the Japanese version they also used to argue continuously), so he spent most of his time counting things, resulting in his love for numbers. When he found a book about how penguins cared for their young, he became obsessed with penguins. His dream was to build a penguin theme park.

Crump worked as an accountant at KaibaCorp. Crump, along with four other KaibaCorp employees formed a group known as the Big Five. Seto Kaiba, the adoptive son of the head of KaibaCorp, convinced the Big Five that Gozaburo is mistreating them and that he would help restore them to their former power. The Big Five agree, and thus buy 49% of KaibaCorp. Combined with 2% that Gozaburo had previously given to Seto for a test to prove his business skill, the Big Five voted out Gozaburo and voted in Seto as the president of the company.

However, Seto quickly backed out on their deal, stripping the Big Five of their power and leaving them little more than figureheads and consultants.

Furious over their betrayal, the Big Five strike a deal with the president of Industrial Illusions, Maximillion Pegasus in an attempt to overthrow Seto. If Pegasus defeats Seto and Yugi Muto in Duels, then they will use their 49% to vote Pegasus into power of the company by kidnapping Mokuba Kaiba, who has been entrusted with the security codes to the two percent the Big Five need.

The Big Five later watch the Duel between Yugi and Pegasus on their monitor. The Big Five and Pegasus' plan fails, after Pegasus is defeated by Yugi. In the manga, Crump and the rest of the Big Five are fired by Seto and are never seen again.

However Kaiba is rescued by Mokuba, Yugi Muto, Joey, and Mai Valentine. The Big Five reprogram the game and set the "Mythic Dragon" as the final boss. However, it is defeated by Yugi and Kaiba's "Dragon Master Knight". 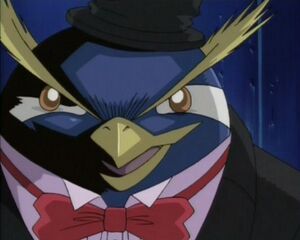 After losing in Legendary Heroes, the Big Five got trapped in the virtual world, instead of Kaiba. Here they met up with Noah Kaiba. Having Seto as a common enemy, they made plans for revenge.

During the Battle City tournament, Noah had the KaibaCorp blimp sucked into an undersea fortress, where the virtual world's main servers are. They force Seto and Mokuba Kaiba, along with Yugi and his friends into the virtual world again. Using an altered set of Duel Monsters rules involving Deck Masters, the Big Five Duel their enemies in the hopes of stealing their bodies to escape the virtual reality.

Crump took the form of "Nightmare Penguin" to Duel Téa Gardner. His penguin minions led her to his lair where he told her what he knew about her. Soon after that, Téa chose "Dark Magician Girl" as her own Deck Master. He calculated the odds of them Dueling to be 100% and the odds of him winning to be 99%. As he lowered Téa's Life Points, she became engulfed in ice, but she managed to defeat Crump thanks to the advice of "Dark Magician Girl" allowing her to play the "Sage's Stone" and Summon "Dark Magician" from Yugi's Deck where he was witnessing the Duel nearby, causing the ice to vanish and defeating Adrian Crump.

Crump, along with Gansley, Johnson, and Leichter, having failed to win their targets bodies, went behind Noah's back and attempt to steal the bodies. They chased down Duke Devlin, Serenity Wheeler, and Joey. As they argue over who gets which bodies, Noah made contact and told them off. Since Nezbitt didn't rightfully take Tristan Taylor's body- Nezbitt had been facing Tristan, Duke and Serenity in a single duel but only defeated Tristan when he sacrificed himself to save Serenity- Noah allowed the Big Five to share Tristan's body in order to Duel Yugi. Should they win, they would get their freedom.

The Big Five face Yugi and Joey, using Tristan's body. The 5 each switch control and their Deck Masters throughout the Duel. Crump took many of the early turns, as they were using an "A Legendary Ocean" strategy, which suited his Deck Master effect. Towards the end of the Duel, the Big Five uses "Dragon Revival Ritual" to combine their Deck Masters into the "Mythic Dragon" again. The dragon is destroyed by Yugi and Joey's "Mirage Knight", but the Big 5 use "A Deal with Dark Ruler" to make "Berserk Dragon" their Deck Master. Ultimately, it is destroyed by "Dark Magician Knight", costing them the Duel. Adrian III, Gansley, and Leichter blame Johnson for their defeat. The Big Five again try to steal the heroes' bodies but fail thanks to Noah putting them back into Tristan's body and sending them away.

Noah refused to give the Big Five any more chances after that. In the original version, Noah deleted Crump and the rest of the Big Five. In the dub, Noah imprisoned them in the different corners of the Virtual World, and they were supposedly destroyed when the Virtual World was blown up.

Little is known about his relationships with his parents, but in the Japanese version, it is said that his parents argued a lot. Crump is probably angry at his mother and father for paying little attention to him.

Crump has a deep hatred for his ex-boss. Big 2, along with his comrades, tried to take down Seto twice in the past but failed. The major reason why Adrian hates Kaiba is most likely that the former Duel Monsters champion rejected his idea of building a penguin theme park.