From Yugipedia
Jump to: navigation, search
For other version of this character, see Bakura Ryou (disambiguation).

Bakura Ryou,[note 1] known as Ryo Bakura ( Bakura Ryō) in the Japanese version, is a recurring character in the Yu-Gi-Oh! anime. He is a classmate and friend of Yugi Muto.

He is the modern-day counterpart to Bandit King Bakura.

Yami Bakura is his other self, released from the power of the Millennium Ring. The two rarely directly converse. Unlike the close, cooperative relationship between Yugi Muto and Yami Yugi, Yami Bakura is a malignant entity that completely suppresses Bakura's spirit when he takes over him.

In the Duelist Kingdom arc, he wears a white wool sweater and green undershirt. His usual outfit in following seasons consists of a blue opened shirt over a light blue and white horizontally striped t-shirt. Bakura has brown eyes and white hair. His hair is pointed downwards in various directions and trails half way down his back. He wears the Millennium Ring on a lace around his neck. In the manga, during the Battle Ritual, he wore a different white t-shirt. Bakura is fair-skinned.

In the original version, Bakura has a polite speaking matter, using many honorifics for others.

In the English dub, Bakura has a British-English accent. In the Singaporean dub, Bakura speaks with a Southern-American accent.

When Bakura was a child, his father had bought the Millennium Ring, and gave it to him. Unbeknownst to them, the Ring contained Yami Bakura, an ancient and malignant spirit. 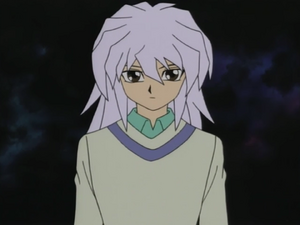 Bakura is briefly seen in the first episode, watching Yugi Muto Duel Joey Wheeler, and then again when Joey is Dueling Téa Gardner, although his face is not seen.

Bakura somehow bypasses security and boards the ship to Duelist Kingdom despite not being selected by Maximillion Pegasus to be an official Duelist in the tournament. He is spotted by Téa on the ship and on the Duelist Kingdom island.

After Yugi and Joey have won a number of Duels in the tournament, Bakura approaches the group (which also includes Téa and Tristan Taylor). He spends some time with them and they all discuss what their favorite Duel Monsters cards are. Bakura reveals his favorite card to be "Change of Heart".

Yugi and Bakura agree to a Duel with Yugi's Deck including his friends' favorite cards. As the Duel starts, Bakura turns into Yami Bakura with his Millennium Ring. Yami Bakura traps Yugi, his friends and the normal Bakura into their favorite Duel Monster cards, leaving Yami Yugi to save his friends lives.

When Yami Bakura plays "Change of Heart", Bakura appears as the card. Bakura asks Yugi to kill him, as he cannot bear to be controlled by the evil spirit inside his ring. Instead, Yami Yugi switches the souls of Bakura and Yami Bakura, then Yugi sends Yami Bakura to the Graveyard. 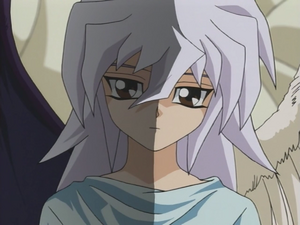 Bakura as "Change of Heart".

After the incident, Bakura accompanies the group as Yugi and Joey continue to battle through the tournament. Bakura's Ring helps them escape from a cave.

During the night before the tournament finals, Bakura, Téa and Tristan decide to explore Pegasus' castle for clues on how he is able to beat his opponents so easily. Pegasus finds them and traps them in a vision of Ancient Egypt, but Yami Bakura helps them escape. They return to their beds thinking it was a dream.

During the final Duel between Yami Yugi and Pegasus, Tristan sneaks off, and Yami Bakura follows him. After a confrontation between the two, Tristan figures out that Bakura is being controlled by an evil spirit in his Millennium Ring, so Tristan throws it out of a window.

When Yami Yugi defeats Pegasus, Yami Bakura again takes control of Bakura, and the Ring reappears. Yami Bakura challenges Pegasus to a Shadow Game (between their Millennium Items instead of in Duel Monsters), and defeats him, taking his Millennium Eye.

After the tournament finishes, Bakura regains conscience. He, along with the rest of the group, returns to school.

After Yugi's Millennium Puzzle is stolen, Téa informs Bakura. Yami Bakura takes over and uses his Ring to track down the Puzzle. When he is taken to an old warehouse, he sees that Yugi is Dueling with Bandit Keith, possessed by Marik Ishtar. Yami Bakura tries to break Marik's control over Keith, sending Keith on a rampage where he breaks the Millennium Puzzle. The normal Bakura takes over and knocks Keith back to rescue Yugi. Bakura then returns to school. 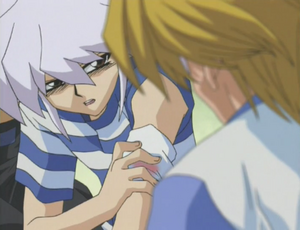 Bakura shortly after he is stabbed.

Bakura is taken to hospital by Solomon Muto. While Bakura recovers in the hospital, Yami Bakura takes over and escapes by overpowering Solomon. He acquires a Duel Disk and the required number of Locator Cards to enter the finals.

Bakura arrives at the quarterfinals, seemingly unaware of his injury. He ignores everyone's protests that he isn't well enough to Duel and boards Kaiba Craft 3 where the Duels are taking place. When asked how he made it to the finals, he tells his friends that he acquired the Locator Cards himself, but doesn't go into details on how he got them.

Bakura is paired up against Yugi. When the Duel starts, Bakura turns into Yami Bakura. When Yami Bakura is about to win, Yugi plays "Slifer the Sky Dragon", guaranteeing Yami Yugi's victory. To avoid defeat, Marik orders Yami Bakura to let Bakura take control. When this happens, Bakura emerges in the Duel, still injured from the stab and an attack from "Slifer the Sky Dragon" would risk his life. Yami Bakura refuses to take the risk, as he needs Bakura to survive. He retakes control and lets Yami Yugi defeat him. Bakura is left in a coma, and the Ring is lost in the Duel, but is returned by Téa being controlled by Marik.

A flashback of Yami Yugi asking Yami Marik what happened to Bakura appears in Yugi's mind. He resolved to free Bakura from the Shadow Realm.

Bakura doesn't show up in this arc, but Yami Bakura shows up in a vision involving the Millennium Puzzle. Surprisingly, Bakura was mentioned by Joey on one occasion.

At the beginning of the Pharaoh's Memories arc, Bakura runs away from a voice, and attempts to hide in a church. That voice tells him that he still needs to acquire the other Millennium Items. That voice - Yami Bakura - then possesses him. Later on, Yami Bakura takes the Millennium Ring back from Rex Raptor and Weevil Underwood, who mistakenly took Yugi's Millennium Items while trying to steal his Egyptian God Cards.

Soon after Yami Bakura engages in a Dark RPG which recreated the events of Yami Yugi's own life. After Yami Bakura ventures to the Memory World through the Dark RPG, Bakura is finally free from his control following the destruction of Zorc and the subsequent destruction of Yami Bakura. After the game, Bakura was seen collapsed on the stairs leading to the Tablet of Lost Memories, and Joey thought it was a good idea to give Bakura's Ring back to Yugi.

Bakura travels with Yugi and his friends to Egypt to witness Atem's departure and the Battle Ritual. The building where Bakura witnesses the Duel begins to collapse, but he escapes.

While Bakura himself hasn't ever been shown using the Deck in either the manga or anime, it's stated that the Battle City Deck that Yami Bakura used were actually built by Bakura.[3]

During Duelist Kingdom, Bakura's Deck is based on disrupting, or breaking his opponent's strategies through various cards including "White Magical Hat", "Morphing Jar" and Bakura's favorite card "Change of Heart". His Yami uses this Deck for his extempore Tarot-Session with Pegasus, and it is implied, that the entire Deck was created under this point of view, since the Japanese name of Bakura's "Lady of Faith" is "Highpriestess", one of the traditional cards in a Tarot-Deck (usually associated with wisdom and love).

Bakura used an Occult Deck during Battle City, focusing on the darker side of the occult by making extensive use of Fiend monsters. The signature card of this Deck is "Dark Necrofear". Using "Dark Necrofear" with "Dark Sanctuary", "The Dark Door" and "Dark Spirit of the Silent" he had total control over opposing monsters while "Destiny Board" gathers "Spirit Messages" to declare an automatic win. Although only Yami Bakura was shown using the Occult Deck, Ryo claimed to be fond of grotesque cards and that he had a pretty good Occult Deck.

During Millennium World, Bakura further adds to his Occult Deck and it now incorporates monsters that reflect on his ancient self Thief King Bakura, such as the "Diabound Kernel", which refers to Thief King Bakura's Ka "Diabound", as well as using "Spirit Shield", which Thief King also used to protect his Ka and the tablet cards.