From Yugipedia
Jump to: navigation, search
This article is about the city. For other uses, see Atlantis (disambiguation). 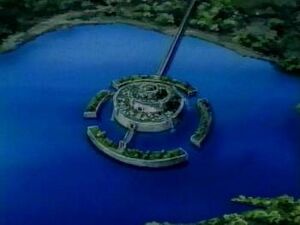 Atlantis (ja: アトランティス Atorantisu, el: Ἀτλαντὶς) is a legendary island. In the anime universe it was a real island that existed 10,000 years before the present day's events. The origins of Duel Monsters can be traced back to Atlantis, where the monsters existed as spirits.

Atlantis was once a perfect city, surrounded by the ocean isolating it from the rest of the world. It was inhabited by Duel Monster Spirits and humans, who coexisted peacefully. They were said to have known nothing of violence.

Atlantis was governed by Ironheart and later his son Dartz.

One day darkness descended on the city. A volcano erupted and fragments of the Orichalcos stone showered down upon the city. The Orichalcos granted the citizens knowledge of power. The Orichalcos could also be used to produce energy. Atlantis quickly began to advance technologically and in a few years became the most advanced civilization in the world, even more so than the modern world. 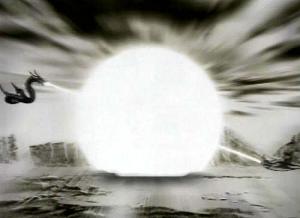 The Battle of Atlantis

As the city progressed, people became more corrupt, greedy and violent. Dartz saw it as his duty to correct this. The people who had become corrupt on the inside, physical appearance started to change to reflect it. Dartz's wife, Iona even changed to a hideous beast. She proceeded to attack him, but he killed her with his sword. Wondering how a perfect society could crumble like this, Dartz consulted the Orichalcos stone. He was given the impression that the people of Atlantis were evil and he must wipe them out and start fresh.

Unable to accomplish this task by himself, the Orichalcos told him to revive its master The Great Leviathan to assist him in his battle against humanity. But Ironheart stood in Dartz's way and advised him to destroy the Orichalcos stones and return to their old way of life. Having seen the true nature of the people, Dartz refused, convinced he must wipe them out.

Ironheart and Dartz's daughter Chris refused to side with Dartz. As Dartz unleashed an army of Orichalcos Soldiers on the city, Ironheart and Chris led a group of refugees from the city to the nearby mountains where Ironheart searched for the creatures of ancient power; the knights Timaeus, Critias and Hermos, to assist them in a battle against Dartz. However the knights were turned into dragons by Dartz to weaken their power.

Ironheart led an army of Duel Monster Spirits and the Legendary Dragons to battle Dartz, the Orichalcos Soldiers and The Great Leviathan. Neither side was victorious and Atlantis sunk to the bottom of the ocean. The Duel Spirits were sealed away and scattered across the world, until they would be needed again, the dragons were sealed in crystals and The Great Leviathan had its power drained before being sealed back to its world. 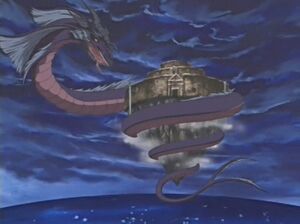 Atlantis and The Great Leviathan revived

Over the course of 10,000 years, Dartz collected souls to use to revive The Great Leviathan. One such soul he believed to be necessary was that of the pharaoh, who he met 7000 years after the destruction of Atlantis (5000 in the English version). Dartz missed his chance to get his soul as it was sealed away. However the pharaoh reappeared as Yami Yugi 3000 years later (5000 in the English).

As Dartz relived the ancient battle, he resurrected the city outside Florida to use as the final stage of the battle. The chosen duelists, Yugi, Joey and Kaiba managed to defeat the Leviathan with the assistance of The Legendary Dragons, who were turned into their true knight forms. After Dartz and the Leviathan were defeated, the city sank into the sea again.